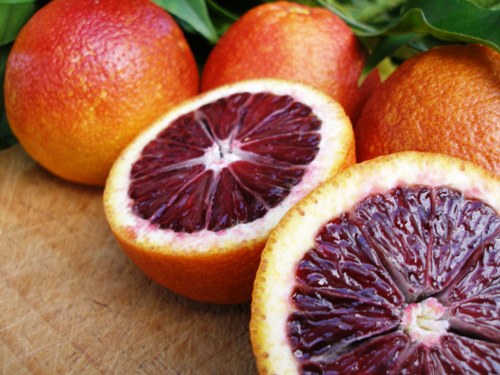 I’m always a bit iffy about singing the praises of imported produce, especially when it’s something we could be growing locally. But some things are just too good to forsake on principle. Californian blood oranges are once again hitting the shelves of supermarkets and fruit-shops nation (and probably world) wide, and as always I can’t help but buy up large. With the possible exception of limes (which aren’t really an eating fruit), blood oranges are my favourite citrus.  I love them for their dusky peel and their gruesome, raw-steak flesh (look up ‘Dexter, morning routine’ on YouTube to see what I mean), but most of all I love them for their unique, raspberry inflected flavour. I had read about blood oranges for many years before we could actually get them in New Zealand and still remember skipping for joy (literally) when I first saw them in Jack Lumm’s immaculate, if sometimes ludicrously expensive, fruit store in Remuera. I ate blood oranges until… well you know what happens when eat too much citrus. The things we do for love.

Blood oranges are thought to have originated in North Africa or Sicily around 600 years ago, probably as a chance mutation, or ‘sport,’ from an otherwise ordinary orange. That said, certain Chinese texts seem to suggest they were growing them there much earlier, but due to the rather poetic context it’s hard to tell if the author was being florid or factual.

The fruit gain their distinctive red colouration, and to some degree their berry-like flavour, from the presence of anthocyanins. This group of pigments is widespread in the plant kingdom and has received a lot of media attention in recent years, for their potentially cancer-fighting and age-reversing antioxidant properties. There is no doubt that anthocyanins are powerful antioxidants, but don’t get too excited just yet.  You know how I feel about unsubstantiated claims and so-called ‘super foods’. Show me the unbiased study and I’ll starting saving for my epic retirement. I will accept, however, that blood oranges are probably very good for me, and I can categorically state that they’re delicious. So delicious.

The three main commercial varieties of blood orange – and the only ones ever seen in New Zealand -are Moro, the darkest-fleshed and most richly flavoured of all; Sanguinelli, smaller and seedier than Moro  but still a fine fruit; and Tarocco, a good tasting but usually poorly colored fruit.

Californian blood oranges appear between February and May. I always find that citrus ripen when you want them least – autumn and winter- so on that level it’s nice to have access to Northern hemisphere fruit. Shame we can just do a total crop-swap really.

Citrus are one of the only fruits that travel really well. As much as it galls me to say it, Californian citrus is usually of a very high quality. Its flavoursome, juicy and arrives on our shelves somewhere in the vicinity of perfect ripeness. So I’m not at all convinced that there would be any sensory advantage to choosing local, but in the case of blood oranges it would be nice to have the choice.

Blood oranges need to be grown in truly Mediterranean conditions if they are to develop their famously maroon-blushed skin, but internal coloration seems to occur independently of climate. Citrus nurseries such as Copperfields and Flying Dragon have been propagating the three main commercial varieties of blood, or “pigmented,” oranges for the home-grown market for years now, but still no sign of anything commercial. Sigh.

So why don’t we grow them commercially New Zealand? Can somebody tell me? I asked some citrus orchardists once and they muttered something about experimental plantings in the Hawkes Bay, and then grew oddly suspicious when I apparently demonstrated too much knowledge for a mere punter. They closed ranks and would say no more. Very odd. Is citrus cultivation covered by the Official Secrets Act?

So I suppose I’ll have to pin my hopes on the Moro tree I planted a few years ago out back. It hasn’t fruited yet, but that’s quite normal apparently. They’re one of those good-things-take-time sorts of trees.

Blood oranges are a great dessert fruit or can be used to make a fabulous, if rather gory, sorbet and a wonderfully nuanced gelato. In Europe they are grown primarily as a juicing fruit; indeed it is hard to find any orange juice other than that of blood oranges in Spain and Italy. But unless you know a bloke who knows a bloke, blood oranges are probably too pricey for mere juicing in our neck of the woods. Unfortunately the colour and special flavour of blood oranges is mostly lost during prolonged cooking, so they are largely wasted in marmalades and candied peel.

We can but hope somebody – perhaps that elusive citrus cartel I apparently encountered – gets on with growing this wonderful fruit on a commercial scale in New Zealand. Until then we’ll just have to rely on our backyard labours of love, or the imported offerings down the supermarket.

Do you grow blood oranges at home? Have you seen them for sale at farmers markets? Let us know!