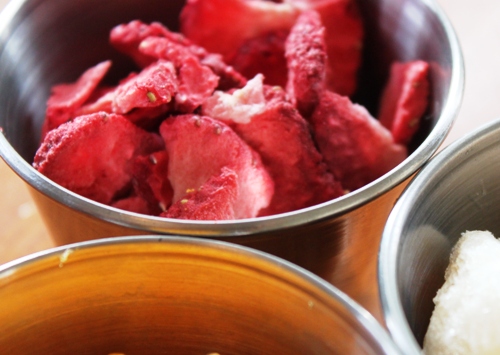 Dear very nice people at Fresh As freeze dried foods. I’m really sorry I haven’t delivered on the article I promised when I asked for some sample product. You were so very generous and, despite my best efforts, I have yet to fully reciprocate. It wasn’t without trying either you know- I pitched a story to… well, probably best I don’t name names but suffice it to say they are collectively the last word (s) in local food media, and on this I think they missed the boat.

But to be fair it was a hard sell. Even though your firm produces such confoundingly exquisite – nay sublime – products, the story loses something in print. Trouble is, methinks, too many lay folk think science (and you are all about shiny, clever science after all) has no business meddling with food. Food is all about provenance and localism and slowness these days. Never mind that science has always underpinned every aspect of food production. Food professionals know better, of course, including Food Editors, but they, like all editors, are led by the moods of the lay folk. So while one very decent local food rag at least plugged you briefly in their news feed (a-hem), I’d have given you 1200 words and a four-page spread. Probably why I’m a jobbing freelancer and not an editor.

It’s very typically, almost mythically kiwi-esque though that your company and product line has been so widely celebrated internationally this year, with a barely a blip on the home front.  You were featured in Saveur magazine’s highly influential Saveur 100 Chef’s Edition for 2011, and appeared on the Today Show, with an audience running into the millions.  Similarly Australian Gourmet Traveller placed you on their  Hot 100 this year too.

So I’m sure you don’t need a local fuss, but I think you deserve one. Or several.

So, please accept my apologies for local apathy, and my lingering gratitude for the wonderfully generous box full of samples (raspberries, strawberries, mandarin, lychees, Balsamic vinegar, white wine vinegar, manuka honey) you sent out an embarrassing number of months ago, and which I am still rationing my way though .

I’m sure you all get the gist of it…

Fresh As freeze-dried foods are little known locally (despite having been based in Auckland for years), but have received massive international attention and praise from some very high places, for their range of superbly rendered freeze-dried fresh fruits, vinegars, honeys and more. Their products are used by untold high profile chefs at home (including one Michael Meredith), and abroad. Admittedly, their products cost a pretty penny, but then so do all the best things. Freeze drying is a slow, exacting process and the tools of the freeze dryer’s trade are dazzlingly expensive.

Now in case you didn’t know, freeze drying is the process of subjecting items to extremely low temperatures (minus fifty-minus eighty degrees Celsius) in a vacuum or low-pressure environment. These conditions cause water to rapidly evaporate in the form of cold steam, which is then pumped away. In the case of fresh fruit, what remains is completely desiccated, yet retains much of its original form and colour and is shatteringly crisp, yet every bit as perfumed and flavoursome as fresh.  The strange combination of crunchy-crisp texture, and sensation of juiciness without moisture is intriguing, beguiling and very, very good.

Freeze dried fruit can be used in baking and sweet making without any danger of altering the moisture balance, and in powdered form delivers intense, natural flavour without the artifice of essences of cooked flavour coulis.

Incidentally the process was first developed as a means of preserving medical serums during WW2 and was later refined for use in the space programme- where everything from Boston beans to ice cream received the treatment.

Although now intrinsically linked with rough and rude industrialised foods, freeze drying can be used -as Fresh As have proven- to craft wonderful artisan delights, every bit as valid and legitimate as handmade cheeses and cured meats. Every bit as deserving of our support too.