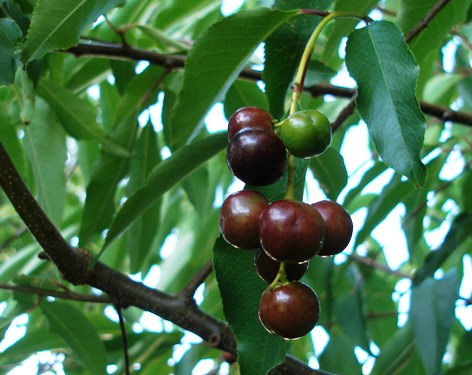 I get peeved when I see cherry trees for sale in Auckland garden centres. There should be a law against selling false hope. Come to think of it I think there is…

Although a sweet cherry might do alright in the odd frost-prone corner of the greater Auckland region, in most areas they will remain lushly leafy but largely fruitless year after year. Knowing all that I tried anyway years ago, and unsurprisingly to no avail. A waste of time, space and money. Leave cherries to the mainlanders I say; and anyway (ok so I’m a little jealous) let’s see them grow bananas or cherimoya!  I guess it’s only natural to want that which we just can’t have. I remember once seeing an excited crowd of locals jostling to gawk at a weedy, heat-ravaged apple tree in a Malaysian botanical garden. Nearby and utterly ignored by all but me was a colossal and fruit-laden mango tree.

So although in the (ah-hem) ‘winterless’ north we can’t grow true cherries with much success, we do have a pretty good substitute at our disposal. The capulin or capuli cherry (Prunus salicifolia) produces small, green-fleshed cherries on a fast growing and mostly evergreen tree. Closely related to European cherries, the capulin has been a popular fruit in its native Central and South America for thousands of years. In its natural range the fruit is enjoyed fresh, in jams, preserves and a number of potent alcoholic drinks.

The fruit of the capulin are about half the size of a European cherry, thin skinned, juicy and sweet, with a strong cherry flavour and a slight but fleeting bitter finish.  Many sources claim that the frothy white blossoms are ‘sweetly scented,’ but they smell like wet Labrador to me. (Then again I think Eternity smells like car shampoo, so maybe my nose is on the fritz. Maybe.)

Unlike European cherries, capulins are produced in loose sprays or bunches, and on a staggering scale. My six year old tree fruits so heavily that I only bother netting about a third of the crop. The birds have a fine time working through the remainder, growing fatter and slower by the day.

The trees appear to be disease and pest-free in our climate, and if anything the only downside to them is that they grow too fast. To stop them disappearing into the clouds with their fruiting wood, they need close supervision, and a brutal prune every other year. Each summer I intend to make capulin liqueur and jam but never seem to get past scoffing them by the chilled bowlful.

Like caigua, the needlessly rare vegetable I banged on about last week, Capuli really deserves to be better known and far more widely available. At present, trees are available on Trademe from time to time, or online from Russell Fransham Subtropicals

You say pawpaw, I say papaya…