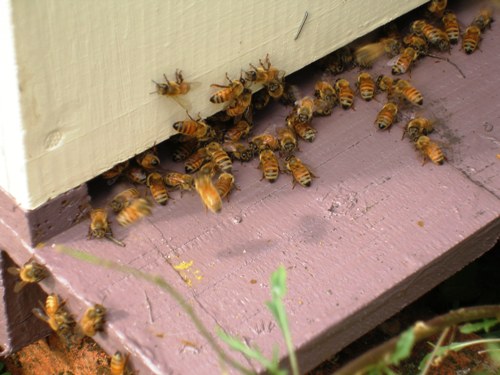 I’m currently feeling massively smug and self satisfied (not really sure that these are different things, but anyway), having just harvested my first sneak preview crop of honey from my beehive.

I’ve had the hive for a couple of months now, and along with my chickens it’s about as far I’m likely to get away with taking the whole ‘gentleman farmer in suburbia thing’ (And no you are NOT having a goat- Proof-reader and ‘best beloved’.)  My primary interest in keeping bees was to improve the pollination of my fruit trees and those in the surrounding area, but the bonus of 30-50 kilos of delicious raw honey each year wasn’t exactly a turn-off either.

Bees  are really no trouble at all – far less maintenance than chickens, or cats for that matter. They also add a certain buzzing charm to the garden.  Unlike wasps (who are nasty bastards), bees don’t come looking for trouble.  If you get stung, it’s probably your own fault.  So far I’ve learned the hard way that bees don’t enjoy being trodden on, caught under clothing or roughly poked with your finger.  Fair enough.  Anyway, bee stings – providing you aren’t actually allergic (which is EXTREMLY rare) – while not exactly pleasant, are only a momentary flash of pain which passes very quickly.

I have a full bee suit (which makes me look like an extra from a 50s sci-fi film) and a smoker for when I open up the hive, but most of the time the suit isn’t really necessary.  The smoker however is essential.  Only an apiarist with a death wish (or a whole- world-of-pain wish anyway) would open a hive without one.

Once you get over the initial shock of being surrounded by hundreds of loudly buzzing, but actually pretty placid bees the most noticeable thing about an open  hive is the overwhelming fragrance of honey, so strong you can taste it in the air.  It’s hard to resist the temptation to tear off your veil and start eating.  This wouldn’t be terribly smart.

After many weeks of being tempted by this gorgeous aroma – and the cascades of golden honey that inevitably spill fourth when the frames are prized apart – I finally weakened.  It’s a bad time of year to take from the bees, just when they’re putting down their stores for winter, but they seemed to have enough to spare and I couldn’t help myself.  I  removed a single frame (replaced with a frame of empty comb) about ¾ full of capped honey.  After brushing away several hundred rather indignant bees I proudly marched inside clutching my prize. The response from my best beloved was not quite the praise and admiration I had imagined.  It turned out I was still covered in bees, most of whom started excitedly hurtling around the living room.  SHE retreated in an animated and rather alarmed grump.

Lacking a proper honey extractor (yet) I  scraped the honey and wax from the comb by hand and strained it through a sieve, eventually yielding nearly a litre of crystal-clear, dark amber and quite ambrosial honey.

The flavour was rich and complex (owing I suppose to the many different flowers available to city bees) with hints, of lemon, liquorice and toffee. I’m sure there are technically superior honeys out there, but this stuff, made by my bees and from flowers in my locale (in a 5km radius of my house that is), stands as the nicest honey I’ve ever tasted and my proudest food moment in recent memory.

Who else has achieved a little bit of Foodie magic lately ?

Prone to numerous parasites and diseases, bees are now in crisis worldwide.  Today in New Zealand honey bees can only exist in human-managed hives.  A backyard hive will benefit not only you but your whole neighbourhood, and keeping bees is not nearly as scary or difficult as you might think. However, as part of the Governments’ bee disease prevention strategy it is compulsory to register all bee hives in New Zealand.  This is an easy and very affordable process (about $30 per annum).  Hives are usually available through Trademe or local beekeeping clubs.