Home » Choking on my words 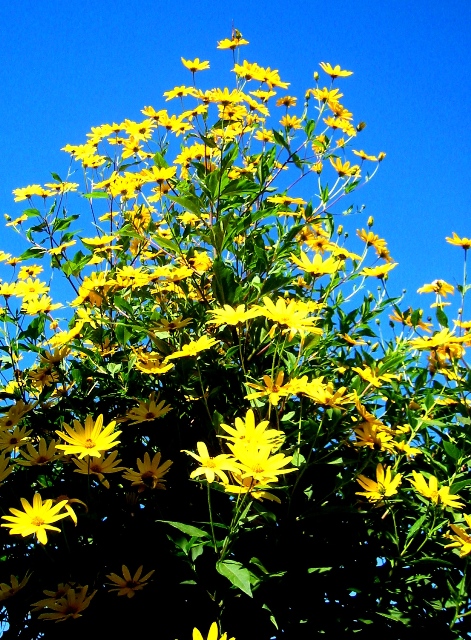 It is perhaps fortunate that I include my own words among the myriad things I am willing to eat, because I have cause to do so on a worryingly regular basis. You see, while I’m a fan of sweeping, unfounded statements, I do so often find they come back to savage me from the rear. You’ll forgive me then, I hope when I tell you that I got it wrong about Jerusalem artichokes. Previously I’ve described them as ’prepaid flatulence’, ‘rooted tedium’ and other not very nice things. Maybe my tastes have matured (or degraded), but a recent run-in with said tubers got me all excited. I actually enjoyed eating them. Quite a bit.

I’ve actually grown Jerusalem artichokes for years, but only for their towering sprays of blazing summer blooms (pictured), which faithfully appear year after year despite my near-callous neglect. They’ll take over the entire garden if you don’t keep them in line, but they don’t put up much of a fight. I wrench out any undesirables and toss them in the bin, to the chooks or over the fence – depending on where my ethics sit on the day

But the idea of harvesting and eating the things had never crossed my mind. I’d tasted the roots long ago and found nothing of interest therein.

It eventually took my mother in-law, who grew up in Indonesia and until this year had no knowledge of the knobbly tubers, to finely turn me on to their charms. Faced with a bumper harvest from her Cromwell garden she was determined to do them justice. She’d heard vague rumours that they were good mashed, souped and fried as chips, but knew little else. She had no actual recipes to work from and could find nobody nearby who deemed them fit for the table, so she just got cooking. I wish more people did this. We’ve all become far too dependent on recipes and I think the net has only put us more deeply in their thrall.

Still, it’s probably for the best that I missed her early experimental phase.  By the time I visited in early winter she’d hit upon some real winners – most notably a certain wickedly good mash/puree enriched with cheese and pungent shards of raw garlic.  Her fastidiously  wok-fried JA chips were something to be reckoned with too.

Having toyed with them further since getting home I’ve found that it’s really quite hard to go wrong with Jerusalem artichokes. However you prepare them, they present a different but always pleasing texture. They’re are not a bit like potatoes, or any other root crop either, but still very satisfying and their flavour is warm and decisively nutty. There is a vague whiff of anty formic acid in there too, which some might not find so agreeable, but it’s only slight – you might not even notice it. More significantly, they do seem to cause a bit of bloating in all who partake. Milk gives me more gip, and I quaff that every day. But I do know others react rather less… sociably. If you are new to Jerusalem artichokes it might be considerate to try them in the privacy of your own home. With the windows open.

But I’ll not be holding back, I’m far too smitten and beholden to my greed.

It’s a shame about the name though. I suppose they’re vaguely reminiscent of globe artichokes, especially when pureed, but they have nothing at all to do with Jerusalem. The name is simply an embarrassing corruption of ‘girasol,’ the Spanish word for sunflower, a plant to which Jerusalem artichokes resemble and are closely related.  In their North American homeland they are more appropriately known as ‘sunchokes’.

So anyway, if you’ve previously held dismissive, derisive views of Sunchokes/Jerusalem artichokes or whatever else you feel compelled to call them, give them another shot. They deserve it, and nobody’s more surprised than me.

This recipe- if you can even call it such- might help you to see the light.

Boil the artichokes in well salted water until very tender.

Drain, mash and force through a sieve.

Stir in the cheese until melted and incorporated.

Whip in about 1 tablespoon of oil. The puree should now look glossy.

This puree can be used as a dip, served with roast chicken or pork, added to pizza or stirred into clear broth, something like Soupe au Pistou

5 thoughts on “Choking on my words”