Home » Micro-eggs and the winter garden 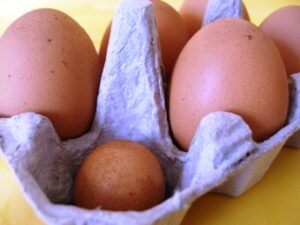 We’ve finally past that much-anticipated seasonal tipping point, the winter solstice, meaning the days will start to draw out again.  And somewhere down the track – well alright, quite a long way down the track – the nation’s gardens and orchards will start to yield delicious things. My own garden is full of such distant promise right now: broad beans that will hopefully have flowered and fruited before I have to dig them in to make way for the summer tomato and peppers crops; sprouting broccoli and Chinese cabbages that are still a wee way off picking; and beetroot and silverbeet that just might be ready for the pot or pan in the next month. Not much amongst that lot to keep my bees on the property right now, but judging by the overloaded frames of honey they have stored, they are doing perfectly well elsewhere in Devonport.

My 2 new chickens – absurdly fluffy black Orpingtons called Phoebe and Amelia – have been very slow to commence laying, but being an old breed and not designed for high-volume commercial laying, this isn’t too surprising. They’ve had a lot to contend with lately anyway – the move from a flock full of their sisters to a new run, already occupied by 2 very unwelcoming Red Shavers.  These old girls (Ophelia and Becky) were appalled by the arrival of  a couple of black whippersnappers and spent several weeks making their lives as unpleasant as possible, with much squawking, chasing and feather pulling. Fortunately chickens have short memories and attention spans, and they eventually lost interest in the fight. Sounds a bit rough but such is chicken politics and it’s more ritual than actual violence.

Anyway, finally, last week one of the newbies delivered her first ‘experiment’ egg, which as you can see (above) was so small she probably didn’t even notice it falling out. This isn’t unusual with first attempts, as the bird’s body gears up for full scale production. 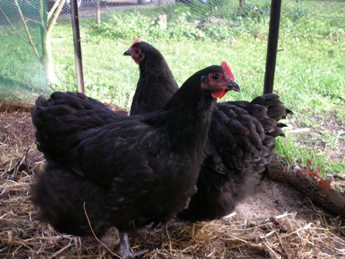 As I’ve said before, keeping chickens is a genuine pleasure and I never tire of watching their charming and prodigiously dim-witted antics. They continue to produce a regular supply of magnificently creamy, flavoursome eggs, which are much in demand among our friends, family and neighbours, as well as the very welcome by-product of wheel barrow loads of rich, manure-laden compost for the garden. If you have even a small backyard you can and should keep hens.

Inspired by a freakishly late crop of gorgeous red pequillo peppers , I was going to talk you through my method of chargrilling and preserving red peppers in this posting, but on reflection I think it warrants a bit more space. It’s such an easy technique and the finished peppers are simply spectacular.  So, next week…

Chillies in a Curry

4 thoughts on “Micro-eggs and the winter garden”