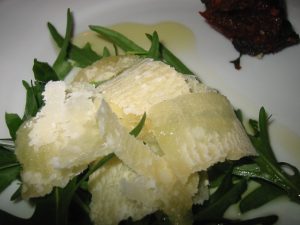 Unlike more than few people about these parts, I have not been caught up in kiwi rocket fever this week – I couldn’t be less interested.  They shot a big stick into space – sort of – for a few minutes.  Meh.  Star Wars has permanently ruined me for the realities of space exploration.  Until they’ve got Super Star Destroyers seeking strange new worlds and then blowing them up, I’m just not interested.

The only rocket I care about is decidedly more earth-bound, and infinitely more useful than anything hoiked into the stratosphere lately.

I get like this every year; I’ve probably even bored you with it before. But right now I am all about rocket – the plant.  It’s just about the sexiest damn thing in the garden.  Now I’m not talking about that namby-pamby, blousy common rocket here either; I’m referring to its dashing and flamboyant cousin, perennial wild rocket (Diplotaxis tenuifolia). There’s just so much to love about this plant: its mustardy heat and lovely sesame flavour; its carefree penchant for self-seeding (ensuring a veritable life-time supply)… What’s not to like?

Although in the relatively mild Auckland climate wild rocket stays in leaf almost all year round, the most succulent, flavoursome leaves are produced in spring and early summer.  And, rather like asparagus, they have that indefinable taste of spring.  I just love them. Tossed with a little lemon juice and olive oil, gently seasoned and finished with a few shavings of parmesan they’ve got the makings of what might just be my all-time favourite salad. The leaves are also excellent scattered over a pizza (scalding-hot from the oven), or folded into pasta dishes at the last minute.  Although a little wilting can be rather fetching, rocket is altogether spoiled by cooking. Wild rocket can also be used in place of basil in a rather punchy pesto, which works particularly well with oily fish.

The plant grows very easily from seed (available from Kings Seeds, and others, as Wild Rocket, Rucula or Arugula), and will survive for 2-3 years under favourable conditions.  Unlike many salads greens, you can allow wild rocket to flower freely -just try stopping it- without any risk of the plant carking it.  Apart from being edible and quite pretty, the buttercup-yellow flowers attract many beneficial insects into the garden – especially hover flies, which make fast work of aphids and their various ilk. Scatter the resulting seeds far and wide. You will never regret having an abundance of this plant.

So if you enjoy a bit of bite and a real depth of flavour in you salads, then wild rocket is absolutely the plant for you.

Annual or common rocket has a similar, but somewhat milder, flavour and only lasts for one season – if that.  In hot weather it has a habit of going to seed and dying with quite startling haste. Don’t get me wrong, it’s a very decent salad green, but just isn’t quite in the league of its perennial cousin.

I’m not much moved by lettuce (although I’m quite enjoying Iceberg at the moment- sort of like crunchy water- and predict a bit of a revival in the near future), but I know it’s the tried and true salad green of choice for many.

Seeds of change and a Bellini or two

2 thoughts on “Wild About Rocket”