I wonder if the French hated washing the dishes so much that they created the cassoulet.

I think maybe in Toulouse, the renown “Capital of Cassoulet” a couple’s argument over who would do the dishes went that little bit further than usual and this resulted in a decision to only ever cook in one single pot.

If you make a little investigation of stews or one pots in the world you do find that people everywhere are keen to avoid washing the dishes. Ireland, Germany, Spain, Mexico, Portugal, Poland, England, America, Japan……every corner of the globe has a version that they call their own.

I certainly appreciate the simplicity of the one pot. Wintery and warming, these are comfort dishes rich in flavour and dense in texture. Filled with the wintery goodness that the garden can offer, one pots definitely have that appeal of feeding many with ease, and in these hard times, on a budget. Naturally it doesn’t have to be all cheap sausages and tough meat. Perhaps it is the name of ‘one pot’ that congers up bad memories of childhood. Many people talk of the trauma of boiled cabbage with odd unidentifiable cuts of animal. But the one pot has come a long way from being something to be very suspicious of.

When you think slow cooked, all of a sudden things taken on quite a different feeling. A little more gourmet even. Push that boundary a little further and we are talking about the robust and intriguing flavours of a complex Indian curry, a red wine rich coq au vin, a Chinese poached chicken with medicinal herbs. The one pot certainly doesn’t have to be dull.

The background of the one pot only goes back to the early 18th century where pounded rice was added to meats and cooked very slowly in a large earthenware dish. The earthenware dish itself became known as a casserole and in turn we have created a type of dish, cooked in the oven.

Different to a stew only in the cooking process (heat that is applied to the bottom of a dish makes it a stew where as a casserole is cooked in the oven), the casserole really took a dive in 1970’s America when things just stared getting out of hand. Tuna casserole is still something you hear in the odd American sitcom and is purely canned soup combined with canned tuna. The thing of potluck dinners, the one pot had lost is glamour and allure.

The stew hasn’t really been doing much better. Since prehistoric times, the stew has been about feeding the masses.

Evidence shows the Amazonian tribes used turtle shells to cook in, and in the Bible we are told that Esau traded his inheritance with his twin brother Jacob for a meal of lentil stew. The Romans were fond of a good stew and we all now about the French and their cassoulet and ragout.

Today we are lucky to be able to source all sorts of great ingredients. This makes for fantastic and interesting one pots to be coming out of your kitchen. Winter is very much the season of the one pot. The ease of cooking means you can remain huddles over the heater that little bit longer, have another glass of red wine while you wait and if you are really organised, either utilis your crock pot or cooked it all the night before for optimum flavour. We all know that a good stew or casserole tastes much better the next day so I try and get organised enough to cook it all the day before and then give it all a further hour of cooking once I get home at night. This will also mean you are not sitting about till ten pm waiting for your one pot.

I am enjoying the fact that more and more you are able to taste great slow cooked creations at restaurants. No longer relegated just to the family table, wonderful versions of classics like Irish Beef Stew, Hungarian Goulash, Ratatouille and Ragout can be seen at high end restaurants created with the extra love and know how of talented chefs.

This certainly does not let you off the hook though. A good stew or casserole is still great family fare.

Meat
* Use the correct cut. Slow cooking meats are generally cheaper cuts but do need the time and liquid to make them soft and tender rather than stringy and tough.
* Long slow cooking softens connective tissue and converts it from collagen to gelatine.
* Your best bet is to use shanks, shoulder (where two excellent stewing meats, brisket and flank, come from) and rump for slow cooking. The other way to do it is by price. Slow cooking meats will always be considerably cheaper than the other prime, marbled cuts that come from areas of the animal that are worked a lot through exercise. Look for the meats at the best prices for your slow cooking recipes.
* Cut your meat into even pieces so that they will cook at the same time.

Browning
To add flavour and colour, browning your meat first is recommended. You can get away with not browning for chicken, pork and veal but I still like to.

Liquid
Whether you choose to use wine, stock or water, you need a good amount of it. Enough to cover is the best rule of thumb here.

Time
Don’t rush the process. Most recipes will call for an hour at least or more at a lower temperature. I have cooked things for 5 or 6 hours at a really low temperature before but it is all about the time you have to spare. As suggested, you can cook something the night before and finish the cooking the following night to get the best flavour. A slow cooker or crock pot can be very beneficial for this.

Additional Ingredients
It is all up to you but many recipes will call for a carrot, a few sticks of celery and an onion all finely chopped. This is always a good start for your slow cooked one pot. Some recipes may call for the addition of a secondary meat such as bacon for flavour. I like to add this at the start to really get the flavour in. Herbs and other flavourings need to be added at your discretion. I like to add some herbs at the start if they are woody enough to cope with the long cooking process. I then add some fresh right at the end so I still have that oily, bright taste.
I think half the key to a good one pot is being a little bit imaginative so you can bring out the best of whatever ingredients you decide should share the pot.

The Hungarian Goulash is one of my favourite mid winter one pots. I like to add a few things to make it my own, but like all one pots, the sauce is what it is all about.
Traditionally made using Hungarian paprika, I use smoked Spanish paprika for extra flavour.

In a large heavy based pot, heat a little oil and brown the onion and garlic. Add the meat and brown well. Add the paprika, pepper and salt and mix well.
Sprinkle over the flour and allow to cook for 1 minute before adding enough stock or water to cover the meat.
Add the mushrooms and cover. Reduce the heat to a simmer and cook for 45 minutes.
Remove the lid and check for seasoning.
Add the olives and mix well.
Stir through the sour cream and bring back to a simmer.
Serve with rice or pasta.

Not so Classic One Pot

The Japanese have quite a repertoire of one pots. One is known as Chanko-Nabe and is eaten by sumo wrestlers. Consisting of broth, meat, and vegetables, the Nabe is very wintery and filling.

The base is miso and dashi, both of which can be easily purchased at some supermarkets or at speciality food stores and the pot can withstand anything you throw into it. There are versions for this dish with fish, chicken, salted vegetables….all sorts.

Traditionally served in one giant pot at the table over a gas burner to keep it hot, this is a great one to share with family and friends.

In a large pot, heat 10 cups of water with the dashi, miso and mirin.
Add the shitake mushrooms and simmer covered for 20 minutes.
Remove the lid and add the pork, daikon, potato and tofu. Allow to simmer for a further 10-15 minutes.
Once the potato is cooked, add the cabbage and mix well.
Serve at the table with bowls of rice.

The Moroccan One Pot

The tagine is much the same as the cassoulet. It’s an earthenware dish rather than the name of a meal. The cooking process is the same but the conical shape of the tagine lid allows for moisture to rise and drip back into the dish allow for a rich flavour and moist tender meat. The thing I appreciate the most about the tagine is that through out Morocco they are not scared to go to town with fruit. The hot climate helps that but we can also make the most of the abundant autumn and winter fruits slow cooked with lamb.

Don’t be put of this recipe if you don’t have a tagine. A large heavy based pot with a lid will do the trick just as well.

In a large heavy based pot or tagine, heat a little oil and brown the onion and garlic.
Place the lamb in the pot and mix well before adding the preserved lemon, apple, all the spices, salt, pepper and raisins.
Place the lid on and reduce the heat to a simmer. Cook for 2 hours.
Remove the lid and check for seasoning and adjust as needed.
Serve with cous cous or rice.

This is totally untraditional but really wintery and tasty.

In a large heavy based pot, heat a little oil and add the butter. Allow to melt then add the onions, bacon and celery.
Sprinkle in the plain flour and mix well.
Slowly add the milk, mixing the flour well to form a paste. Keep mixing till all the milk has been added and you have a creamy sauce.
Add the fresh and smoked fish, the mussels, lemon juice and zest. Mix well.
Add the herbs and the egg, mixing all through gently.
Top with potato mash and grated cheese and place in a preheated 180C oven for 45-50 minutes.
Serve with crusty bread.

8 thoughts on “One Pot Creations” 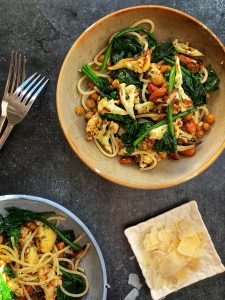