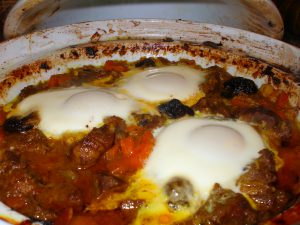 The thought of deep, earthy slow cooked food is so very appealing amidst the miserable chill of winter. Tough but tasty cuts of meat cooked until meltingly soft, swimming in rich complex gravies along with sweet nuggets of onion, carrot, parsnip and mushroom. If there is indeed any sort of upside to the misery of the cold months, it’s food like this.

Trouble is, most of us lead such crazy, hectic lives nowadays that this kind of cooking is either overlooked or roundly dismissed. Long hours every day spent in the bill-paying grind and then for many of us the tedious (and in Auckland often terrifying) trip home.

Thankfully though, the ever resourceful appliance peddlers have more than a few toys for hungry, weary travellers like us. Bench top slow cookers – rather like bread makers- are a modern kitchen phenomenon. Rather than being just another gimmick and object of clutter, they actually make life easier- which is the whole idea of technology after all.

Slow cookers don’t really do anything that can’t be achieved in a casserole or tajine, but- and I think this is their biggest selling point- they have timers- meaning you can do your prep and then set the cooker to have dinner ready for the table when you walk in the door at night. Kind of like a plug-in 1950s housewife but without the gingham and Tupperware.

As I said, you can do all of this with an oven, but personally I’m always anxious about leaving my oven switched on and unattended. Who knows what it might get up to? Most slow cookers are packed with safety feature which help to minimise the risk of coming home to smoking ruins.

Slow cooking- stews- hot-pots, casseroles and myriad others are common to all cuisines and hark back to the days when most home cooking was done in heavy clay or cast iron pots over an open fire or better still in the glowing embers. This softly, softly approach to cooking renders the toughest cut of meat succulent and tender, brings out the natural sweetness in root vegetables and concentrates flavours to a depth and clarity that is quite simply ambrosial

Gravy beef, chuck steak, blade steak and other economy cuts are the only way to go in the world of bovine based slow cooking. Shanks, neck chops and the off-puttingly named flaps are the sheepish equivalents. I can offer little advice when it comes to slow cooked or stewed pork dishes except to recommend you invest in a good extractor fan first. Rendered pig is more than little a wiffy.

The best vegetables for slow cooking are the cool climate classics- carrots, parsnips, potatoes, celeriac, onions and dare I say, it even Swede. Given time and patience, this most odious and odiferous of roots can be transformed into something quite special. Yes, seriously.

As you might have guessed by now, I’m a bit of an Italio-phyle. Being a bit of milkshake of Maori and European ancestory, I was often mistaken for Italian or some other Mediterranean extraction as a child- which suited me just fine. Although I’ve since learned that masquerading as another ethnicity is a bit sad, I do still have a love for all things Latin- specially things of an edible nature. So it’s probably no surprise that one of my all time favourite slow cooked dishes is osso bucco. This recipe, from Italy’s milk-fed north, uses one of the most under-rated of cuts- veal or beef shins. Although initially startlingly tough- (the shin muscles get quite a work out in life) but when cooked down slowly  in a stew of tomatoes and wine they become fall-apart tender and yield bucket loads of gorgeous bovine depth. Although not to everyone taste, the built-in fount of luscious, creamy marrow in the centre of the bone is just the icing on the cake for me. I could eat that stuff all day or at least until my arteries gummed-up.

I’m a huge fan of parsnip either mashed, as crispy wafer-thin chips but most especially in rich, beefy stews and casseroles. Always referred to as ‘snarpips’ in my family, their silky, sweetness and delicate herbal flavour is the perfect partner to so many of my favourite dishes. Whether they feature in the recipe or not, parsnips can do no wrong- so don’t hold back.

Lamb is often over looked as a stewing meat, but Irish stew; a restrained but hearty dish of lamb meat- neck chops do particularly well here- potatoes, onions and carrots, is easily among my favourite winter offerings. Served with soda bread or dumplings it’s a dish of the very deepest satisfaction.

Lamb shanks’ are probably the best know cut of the sheep for the slow cooked treatment, and while not as affordable as other stewing meats, they offer gorgeous buttery, flavoursome meat and a wonderfully lamby stock.

Lamb shanks’ work particularly well in a tajine- and can replace the rump specified in this recipe quite admirably. I probably make more tajines in winter than any other kind of slow cooked dish. There are literally hundreds of variations on the tajine- (which is in fact a cooking vessel, but much like the casserole is most often used to describe dish itself), but they all follow a similar pattern. Tajines are usually meat based (lamb, duck, kofta, beef, goat), contain basic vegetables such as carrot and onion and are flavoured with typically North African spices like cinnamon, cloves, turmeric and saffron. The inclusion of dried fruits such as apricots, prunes, fig and quince is a hallmark of tajine cooking as is the addition of various nuts. Many tajine recipes also include honey, which while quite traditional can be a bit alarming to the western palate when added too liberally. On the other hand, I very much appreciate the Moroccan habit of breaking an egg per diner into the tajine shortly before serving (pictured).

And before you’re wooed by the wares of Milly’s et al, no you don’t need an actual tajine (the conical lidded cooking vessel) to make a tajine stew- they work equally well in a casserole or electric slow cooker.

If I was the whiney, pleading type and hell, maybe I am, I’d be pushing you towards tajines more than any other style of cooking this winter. They’re perfect for lazy cooks because you don’t need to brown anything, making them the archetypal one pot wonder and I’ve yet to find a person who doesn’t visibly swoon when the lid comes off.

I’m of the opinion that chicken is usually wasted in stews, casseroles and even tajines. The flesh disintegrates into pappy fibres and I’m often left wondering how I can dispose of the whole mess without the host noticing (Labradors are very useful here). However, there are one or two very passable chicken stews and similar, of which my favourite by far is coq au vin. Not a million miles from Beef Bourguignon (another Grande Dame of the French cooking repertoire) coq au vin – meaning rooster in wine- consists of chicken portions slowly cooked in red wine with onions, mushrooms, bacon and the classic bouquet garni. Older recipe specify an actual rooster for this dish along with its blood. Anyone who’s spent much time in the proximity of a rooster may find this rather appealing.

Once you’re in the habit of making tajines, stews, casseroles and other slow cooked pleasures of the cold months, the style becomes quite addictive. I’ve even been known to stretch out my tajine season well into summer. After all, it gets hot in Morocco, right?

In these rather worrying days of crumbling economies it’s a pleasure and relief to find recipes that are affordable, nutritious and thoroughly delicious. This is certainly true all of the above and most slow cooked dishes for that matter. So if you’re not a slow cooking convert just yet- get thee to the crock pot!