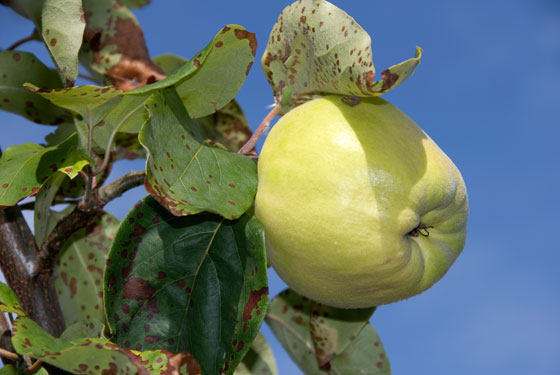 Having a young baby has given me cause to wander the side streets and back roads of my neighbourhood every other day. Whenever she gets bored and grizzly, or when La Madre needs a break, we hit the pavement.  Other people would probably be perving at the architecture: the ramshackle villas, the transitional bungalows, even the odd gothic-revival mansion, but that’s really just so much wallpaper to me. I’m just prowling for things I can eat.

Being an older part of town, Devonport is home to a good many antiquated fruit trees.  Just the other day in a neglected corner of the suburb I found what I suspect was once a grafted pear tree. The pear scion had long since died and rotted out, but the quince rootstock has revelled in its freedom, forming a dense bush, now groaning under the weight of small but powerfully fragrant fruit. A few streets over we found an ancient and beautifully contorted mulberry tree. Judging by its height and girth trunk it must be at least 50 years old, and possibly much older.  Back in summer the tree was covered in large and richly flavoured fruit and the pavement underneath was stained blood red from crushed windfalls.

But our most exciting find to date happened only last week and just a street away from where we live: three large and productive carob trees. I must have passed these tree hundreds of times over the years without paying them any attention at all.  Carobs produce bunches of sugar-sweet, chewy pods, which can be dried and ground to make a delicious and highly nutritious chocolate or cocoa substitute. Although carob doesn’t really taste much like chocolate the suggestion is certainly there, and it has a wonderful, almost honeyed flavour and fragrance all of its own. My mother used to make carob cakes and drinks for me when I was little, and the fragrance of the fresh pods slapped me with a warm nostalgia straight away. As a point of interest, carob pods were the ‘locusts’ consumed by John the Baptist whilst camping out in the wilderness (as opposed to the ill-mannered grasshoppers I used to imagine he favoured).

In many Mediterranean countries fresh carob pods are a popular sweet snack, and I can certainly see why. Although little past their best the pods I found were still very tasty, and as the trees are flowering right now, I’ll be checking up on them regularly over the coming months so I can catch the next crop at its peak.

As I usually do with exciting, rare and potentially threatened food plant I find (they are on council land, so who knows how safe they are) I took seeds from the carob pods, which have already germinated. I still regret not taking seeds and cuttings from a huge and very productive pomegranate tree, reputed to be over 100 years old that was felled in Devonport not so long ago. These days I take no chances.