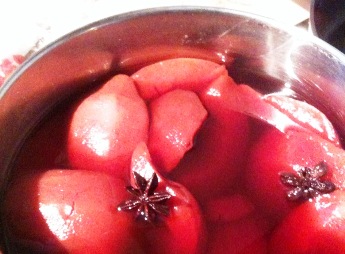 I am slow. Almost slow beyond belief except that this is quite clearly backed up by evidence in multiple forms.

Exhibit A – I initially offered to write some blog postings for foodlovers earlier in the year when Helen asked for offers from the floor. This is several months later and I’m finally churning it out. Slow.

Exhibit B -I’ve clearly been working on it for quite some time because I wrote about quinces which have such a definite (and now long since past) season. Naturally everyone else also wrote about quinces so I am neither unique nor timely. I can only say that it is an achievement of some kind that I am not right on time for quince season 2011. Next time I will write about canned tuna and save myself the heartache of a slipping deadline.

Of course I am still in a position to resign from my topic, or at least I was before I had written the above paragraphs, and no one would have been the wiser. Unfortunately (to clarify – unfortunately for you) I am also quite lazy and my will to cook is on low ebb so if I cannot be novel I will at least have to attempt to be interesting.

My fellow bloggers have explained more or less what a quince is – a sort of apple trying to look like a lemon and smell like a rose. No one else has mentioned that the down on a quince is known as pubescence. I do feel like I am adding some value.

As other people have mentioned the quince is inedible in its natural form (unless bletted – partially decomposed often through exposure to a light frost) and is often turned into paste and jelly, or in my case, poached. I have made quince jelly and paste in the past with mixed success, the paste being delicious if not somewhat time consuming and the jelly being horrific and also somewhat time consuming. I was both a quince and jelly virgin and the finished product was a thick, tasteless, band-aid hued syrup. I gave an unlabelled jar to my then mother in law who promptly forgot what it was and produced the jar at breakfast time when we were visiting some months later. She assumed something awful had happened to her redcurrant jelly. To my shame I did not disabuse her of this notion.

I got my recipe for poached quinces some years ago from the venerable Judith Cullen of Dunedin cooking class fame. I clearly should have taken her advice and poached them rather than make the aforementioned jelly but better to be a slow learner than no learner at all.

Now, Judith’s instructions are to put it in the oven at 160°C for 6 hours. Unfortunately the first time that I read this instruction was as I was typing this up. I’m afraid you will notice this is a recurring theme. I did 4 quinces and prorated the syrup down and I didn’t use cloves (too lazy to find them in the spice box) or the lemon (didn’t have any), cooked it on the stove top for 4 hours – by which stage they were looking ominously band-aid-esque and then left them overnight on the cooling hotplate. They were perfectly ruby red by morning. Queue the sigh of relief. I suppose the moral of the story is that the recipe is relatively foolproof.

So what to do with 4 perfectly poached quinces. I thought about making a cake but getting the mixer out of the cupboard seemed like too much work. Somehow this thought process led to me making a brioche tart. Hardly a labour saving decision.

While this is called a tart in reality it is more like the best possible version of a Danish – sweet doughy goodness melding into abundant custard cut with the acidic juiciness of the fruit. Naturally you can make this using any fruit at all, the original recipe was cherries but I also think apricots would go nicely. Whilst it was not quick in the making nor the writing, I’m going to fall back on the somewhat cheesy mantra of “good things take time”.

Based on a recipe from the book Tarts; Sweet and Savoury by Maxine Clark.

Sift flour into a bowl, add yeast, sugar and salt (if using normal dried yeast add 2tsp to the warmed milk and leave for 10 minutes until frothy then proceed as per the recipe).

Put the eggs into a bowl, whisk well, then make a well in the flour and pour in the eggs and milk.

Mix and knead the dough – it will be really quite soft and will not form a ball as such, I found the easiest way to mix was using one hand to push the dough against the bowl. Once the dough is well mixed slowly add in lumps of the room temperature butter and continue to knead until the dough is stretchy and silken.

Leave the dough to rise for 2-4 hours or overnight in the fridge – be aware that if you put it in the fridge the butter will make the dough go rock hard so I would advise letting it rest on the bench or in a sink full of lukewarm water for an hour to get a decent raising effect.

Knock back then wrap and chill until the dough is firm enough to roll out – about 30 minutes, which gives you time to make the custard filling.

Put milk and cream in a saucepan and heat until almost boiling. Remove from heat, mix in the vanilla paste and allow to cool to for 10 minutes. In the meantime whisk the eggs, egg yolk and sugar together until pale. Beat the flour into the egg mixture, then the warm milk and cream mixture.

I will not lie and say that working with this pastry is easy but it is relatively forgiving and easy to push around. Line a suitable tin (I used a small aluminium roasting dish approx 20×30 cm – if smaller the custard will be thicker but will otherwise be fine) with baking paper up the sides in case of holes in the pastry and subsequent custard leakage. Chill the dough until it is reasonably firm, work quickly and use a lot of flour – if disaster strikes do not be afraid to patch.

Pour the custard into the pastry and place in your hunks of quince. Leave to rise for 20 minutes then fire into the oven. Bake for 15-20 minutes or until the custard is just starting to set then turn the oven down to 160C for a further 45 minutes or so until golden and set. Cool in the tin, serve room temperature.