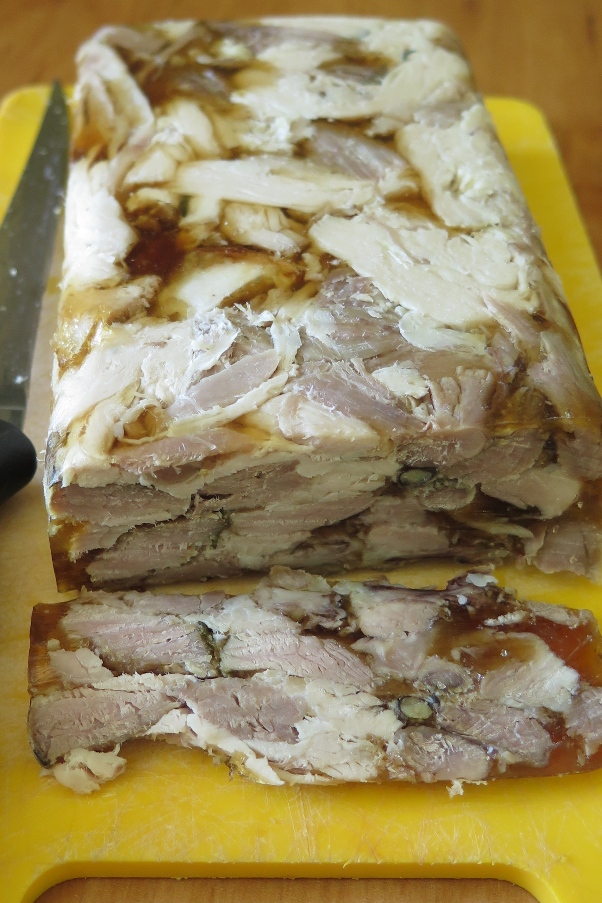 I love rillettes. On their own, on toast, stuffed in pita bread and toasted. Another extravagant way is in stuffed jacket potatoes. They are quite fatty so a year or so back I decided to adapt them. This is what I came up with. I was not sure of what to call this. Fortunately, a person on sausage debauchery, a Facebook group tells me it is called head cheese. That makes sense as the first time I made it I used the bits left over from half I big that I had, the head, the tail the trotters. I am sure that calling it that would put some squeamish people to go into apoplexy. So let’s call it pork loaf or at a stretch, pork terrine or what about – yum.

As there is very little meat on the head, tail and trotters I added a hock and a bit of belly. The trotters provide a ton of flavour and lots of collagen which sets the reduced stock. I paid about $14 for the belly, $8 for the hock and $2 for the trotters. The herbs were from the garden and the veggies were all I had left before my visit to the farmers market. All in all it cost $24 plus the cost of the wine and vegetables. If it was for a special occasion I would have added a duck breast (skin on) and a bit of orange zest.

How I Made It

How the vegetables are cut up does not matter. I leave the skin on the onions as I like the colour it adds to the stock, also I am lazy.
The salt was rubbed into the meat and then everything was divided into two roasting pans and placed in a pre warmed oven and slow roasted for 4 hrs at 160 degrees. Everything was covered for 3 hrs and then uncovered for another hour. I thought this may add more colour to the meat and stock. It was done after 3 hrs, but I wanted the meat to be very tender. When it is cool enough to handle all visible fat and the skin are removed and the meat was pulled apart. I ended up with about 700g of cooked pork. 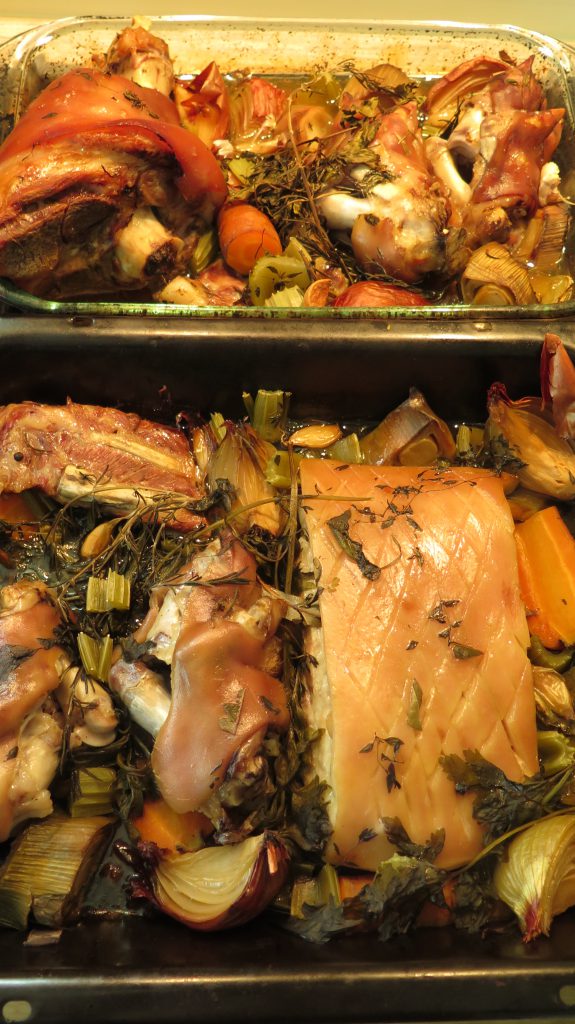 I would not whiz the meat it as I did not want to end up with a mouse like consistency. The stock was strained and then clarified. I did this by using the crushed shells of three eggs and whisking the whites. These were added to the cool stock. The stock is slowly brought to a simmer and then simmered for 20-30 minutes. I then removed the scum, strained the stock carefully and reduced it from about 750 mls to 200 mls. Then let it cool. The amount of stock is not crucial, but it needs to just cover the meat. While it was cooling the meat is packed in a mould. It is then covered with the stock. When it is cold it is placed in the fridge to set. I was going to add green peppercorns, but alas the fridge was bare of these. Two loafs were made. Sliced up or whole it freezes well.

It can be used like sliced meats in salads, eaten in a sandwich, eaten on its own. However, my favourite way is putting it in pita bread and toasting it. That way the gel melts and oozes into the bread.

How to Make Perfect Pulled Pork

The Staff of Life.