Home » The setting of the babymoon… 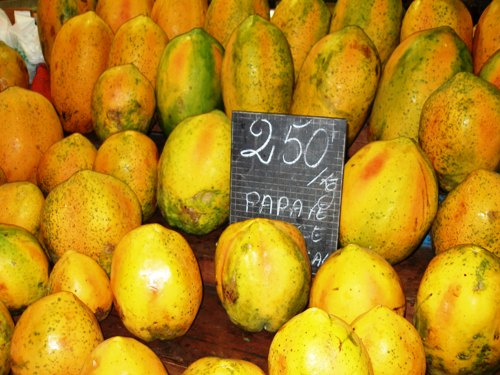 I’ve learnt to ignore guide books when it comes to eating out abroad. They date quickly and I suspect kick-backs are often involved.  A more reliable method is to stalk the average Joe and Josephine on the street. Just don’t be too obvious about it; some people are a bit funny about being followed by strangers.

On our first day in Noumea it became abundantly clear that the preferred breakfast, lunch and dinner among the locals is bread.  A great deal of bread.  Although, in many ways the various peoples of the third-largest island in the Pacific (after Papua New Guinea and New Zealand) are barely French at all, they have held on to or acquired some decidedly Gallic traits. The most apparent of these is a prodigious appetite for bread, most specifically the baguette. You can’t walk ten paces without encountering someone munching on one au natural as they stroll along and/or carrying a couple home for breakfast. Perilously overloaded baguette-delivery mopeds sway through the traffic at all hours, refreshing the supplies of every restaurant, cafe and corner shop.

The Noumeans are very fussy about quality too. Very few of what we know as baguettes in New Zealand would pass muster, and certainly none of the so called French sticks produced by most supermarkets.  The typical Noumean baguette is gorgeously fragrant, with a dense crunchy crust and a slightly sour, chewy centre. Fresh from the oven and spread with the ubiquitous cultured French butter, this is a sparse yet un-missable moment of foodlover’s Nirvana.  Fresh croissant spread with local papaya jam is also up there .

No surprisingly the fine French art of pastierrie is taken very seriously too.  Exquisite tarts, cakes, croissants and myriad sweet pastries are available everywhere and are quite reasonably priced. The more popular boulangerie and pâtisserie sport long and orderly curb-side queues every morning.  (This is in itself indicative of how very ‘French yet un-French’ these people are.)

It took us some time work out where the locals were lunching, because for the most part it wasn’t in the many upscale cafe and brasseries around town.  The preferred choice for most Noumeans is instead a style of eatery known simply as Le Snack. These are, I suppose, something akin to a greasy spoon or truck stop sort of affair. The important difference being that they offer very good, and reasonably priced food. Filled and toasted baguette, croque-monsieur, steak frites, various salads dressed with homemade mayonnaise and (rather incongruously) tuna carpaccio are all standards and are generally very good indeed.  A typical filling of toasted baguette is roquefort, jambon cru (raw ham) and basil leaves.  Rather a lot better than anything you will find at a New Zealand “lunch bar” but at very comparable prices.

We were give a valuable piece of advice by a Dutch family we met by the hotel pool – avoid restaurants at night. They are for the most part heinously expensive and in many cases are churning out adequate but hardly innovative food.  A far better plan of action is to eat at your hotel for breakfast (most do very decent breakfast buffets) and for lunch pop into a Le Snack or call by one of the fabulously well-stocked supermarkets for lunch. These carry every conceivable variety of French cheese and small goods, as well as wine and anything else you might need (and quite a few you don’t). Prices are far better than you might expect too – especially considering almost everything is imported from Europe.

For fresh local produce the daily wet market, known simply as le marché, is your one-stop shop. Whatever is swimming on the reef or fruiting in the hinterland will turn up here sooner or later. Because we were visiting during the winter months (not that you could tell) the variety of tropical fruit available was limited, but most of the essentials were there, including a plethora of banana varieties (from ludicrously fat, sugar bananas to huge starchy plantains), small, spiny but super-sweet local pineapples, papayas, of course, which grow like weeds in the tropics and fruit all year around.  My favourite papaya variety is the torpedo-shaped and very musky red papaya – served ice cold and with a generous squeeze of lime juice this the perfect start to a tropical day, and a great digestive after a heavy meal.

I was particularly delighted to stumble across a large, spiky soursop- one of my all-time favourite fruits.  A strictly tropical relative of the cherimoya, the soursop (otherwise known as the guanabana)  is always sold rock-hard and unripe. This is because the fruit has no in-between stage between ripe and collapsed in a sticky putrid heap. So you take your unyielding spiky green cannon ball home or back to you hotel room and wait. Approximately 24 hours later it will abruptly change from very hard and unappetising to soft, fragrant and ready to eat. There is no polite way to eat a soursop. You simply have to cut a great wedge and be prepared to get very messy. The flesh has a texture very similar to wet cotton wool and instead of eating it as such, you draw it through your teeth, releasing the copious fruit-smoothie like juice. The flavour is rich and remarkable, tasting of grapes, strawberries, apple and guava.  It’s obscenely inelegant, sticky and wet but utterly and indecently delicious.

So, while I must report that Noumea is not immediately obvious as a great Foodie destination, if you look beyond the tourist traps, and are prepared to eat basic but good fare, it has much to offer.

You say pawpaw, I say papaya…

By the light of the babymoon…