How many variations of green are even possible?
Cycling along a country path surrounded by rice paddies, I am overwhelmed by a landscape filled with every conceivable shade of green and marvel at how green, green can be.  The strands of rice grass are almost luminous in their brilliance, contrasting with the mid green of the sugar palms, lotus flower leaves and the deep forest green of the trees.  The air is warm and humid and aside from a few workers cutting back grass, the only sound is our tyres crunching on the loose grit. 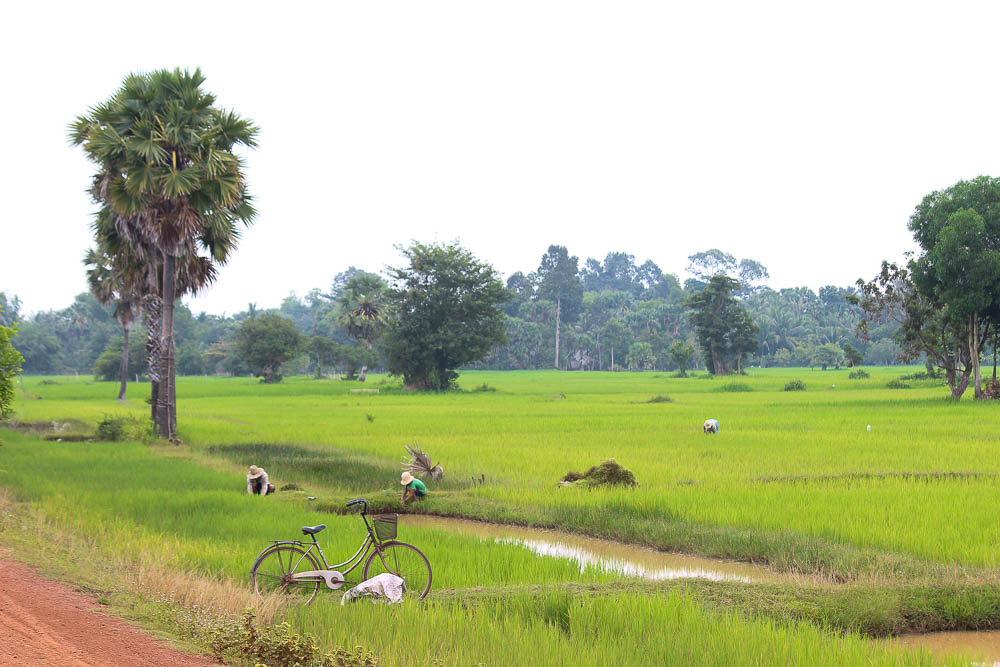 We are on a day trip out from Siem Reap in north western Cambodia, a day mixed with cycling, bus travel, warm friendly people and perfectly delicious food, one of the first of many on our World Expeditions 12 day culinary cycling tour.
Siem Reap is, by urban standards, a gentle introduction to Cambodia, given that it is relatively subdued and calm. More of a town than a city it is easy to navigate and comfortable to wander around.  Our hotel has a pool (and wifi), with the popular bars, restaurants and markets, all within walking distance. And while there is a thriving tourist presence, it feels relatively relaxed.
Those of us who only had time to pack our bags and race to the airport are happy to quickly find the hotel spa. Pampering is very affordable and my feet are quickly buffed, polished, ready for sandals and summer.
The heat is a very comfortable 30 (ish)°C with reasonably high humidity. While I embrace the heat like a lizard, fortunately the rest of our group of 12 seem just as happy, but possibly it is the thought of late afternoon cocktails by the pool that keeps us all inspired to keep pedalling.
Siem Reap has plenty to offer with Angkor Wat its main tourist attraction – and arguably one of the most visited features in Cambodia.  Designed by Khmer architecture in the ninth century, Angkor Wat set within a 400 square km park and bordered by a lake sized moat was once one of the major cities of the world. Considered to be one of the ancient wonders of the world it is truly majestic in size and form and is best visited with a local guide so one can fully appreciate its history. 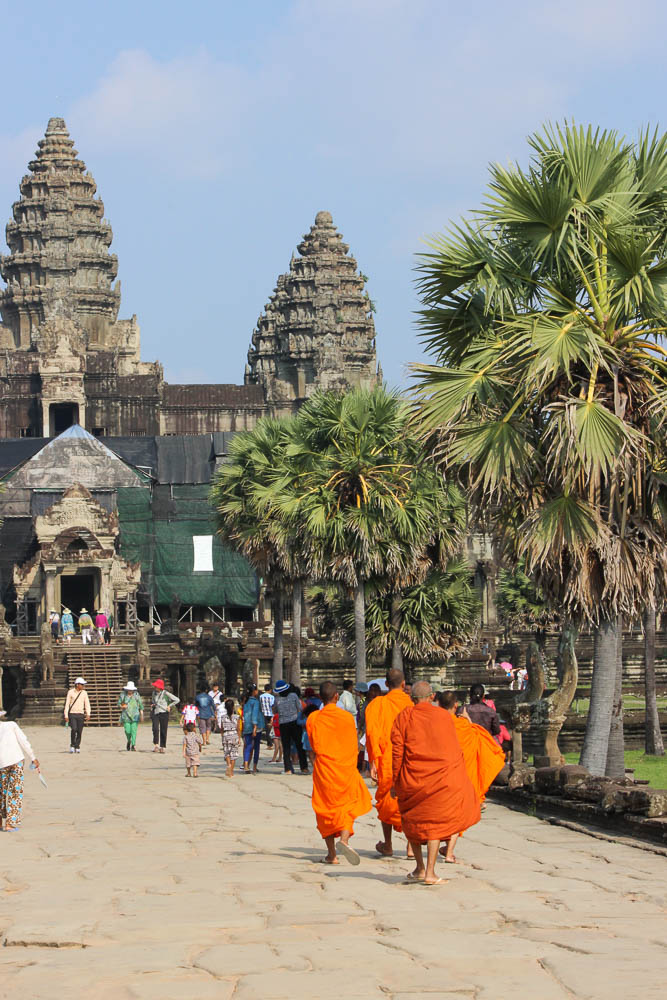 Cambodia has a number of significant rivers, used for both for transport and a vital source of food. During the wet season, which is now upon us, it is possible to travel by water to other provinces and so we shelve our bikes for a full day’s boat trip to Battambang, a long but languidly beautiful experience.
At times the river is so narrow that we are dodging branches that intrude into the open sides of our boat, yet in the centre of Lake Tonlé Sap it feels as vast as an ocean.
The floating villages along the way with their brightly painted houses contrasting vividly with the trees that are trying to find their way through the water. 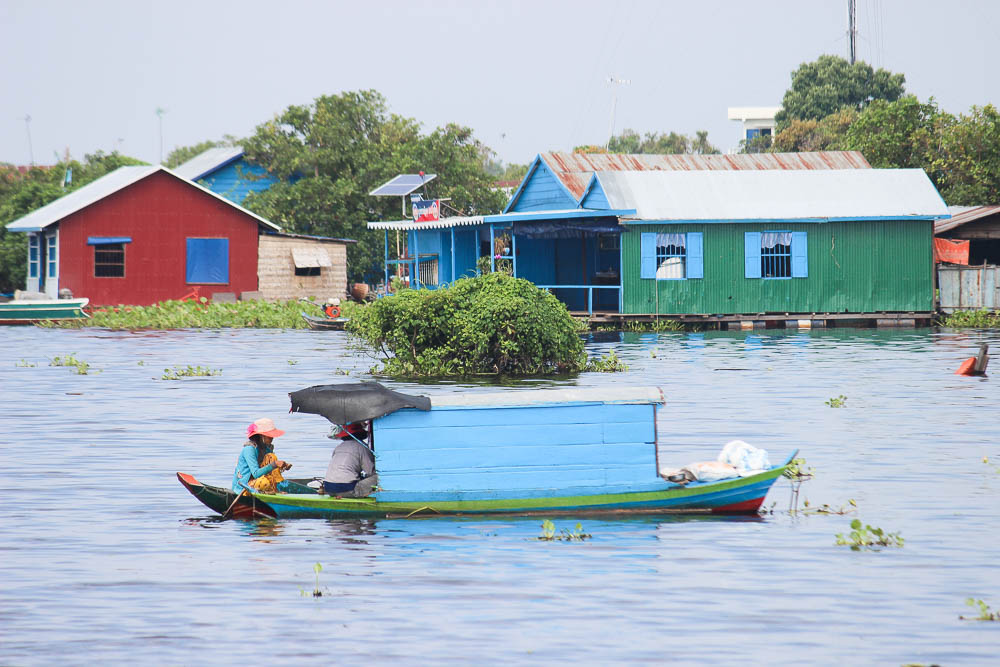 These villages really do move and change with the seasons and during the monsoon is an ideal time to see them  as once the rains stops for the season, the water disappears.  Meanwhile bird life is aplenty and fishermen are hauling in nets laden with writhing silvery fish. 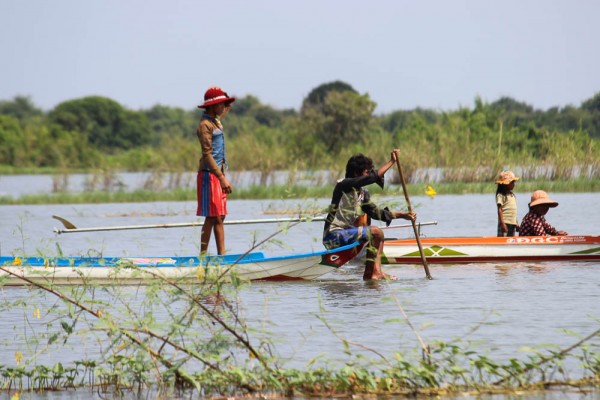 Battambang is known for its charming French architecture, art galleries and its eponymous circus with acrobatics, juggling and a host of human feats, all performed by at-risk kids trained by a non-profit Cambodian organisation.
It is heart warming to see many organisations working with rural families and at risk kids throughout Cambodia.   Siem Reap and Phnom Penh both have Friends International restaurants (I recommend Romdeng in Phnom Penh), where street kids are trained as chefs and front of house staff, with teachers alongside.  Mekong Quilts, Daughters of Cambodia, Samatoa Silk, Spicy Green Mango and Theam’s House are but a few of the businesses to be applauded for their efforts to support local villages with employment and to give young people a chance to both learn and earn.  Along our way we visit a few of the many artisan producers in Cambodia, such as rice paper from home industries. 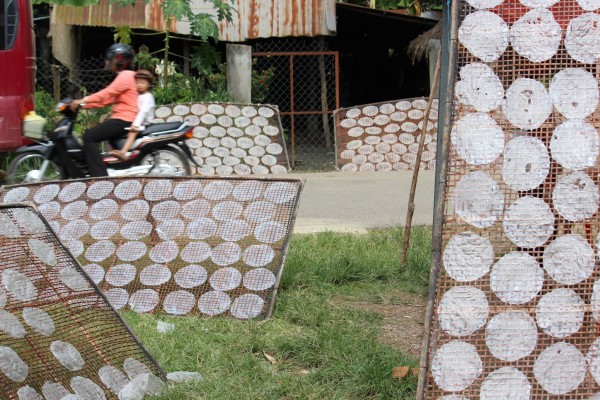 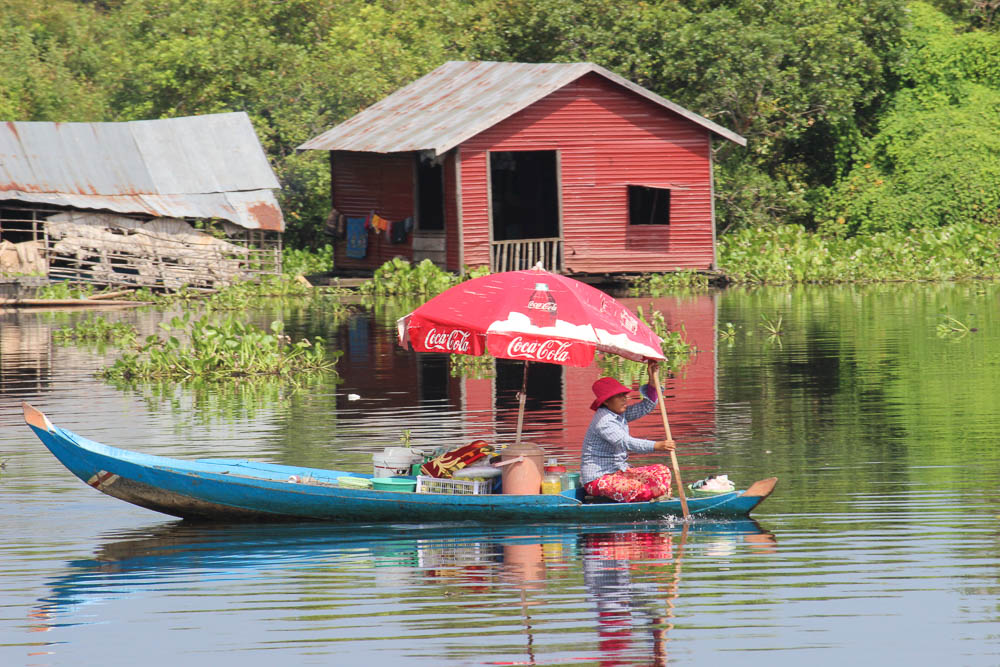 On approaching Phnom Penh (the largest city in Cambodia), the traffic slows to a crawl as motorbikes, trucks and tuk tuks crowd into narrow roads that look ill-equipped to cope such a volume of traffic.
Before arriving in Phnom Penh I had immersed myself in Cambodian literature including “First they Killed my Father” by Loung Ung, who survived the Pol Pot regime.  I have contemplated the violence that would have occurred on the roads, towns and farmland we have travelled, during that brutal 5 year period in the 1970s when one quarter of the country’s population was slaughtered.  None of this prepares me though for the reality of both the Killing Fields and Prison S-21 (The Genocide Museum) and it will be some time before I can even start to process and shelve this experience.  For now I hide behind my camera to gain some distance, although my photos now remain on hold as I feel it is too flippant to delete them yet too weighty to share.
It is in Phnom Penh that we see some of the harsher side of Cambodia with numbers of amputee beggars (parts of Cambodia still has active landmines) and hear stories of tourist muggings in the raw fight for survival.
It is also in Phnom Penh that we enjoy a relaxed dinner on a river boat, visit the opulent royal palace, indulge in cocktails at the Foreign Correspondents Club and shop at the many markets.
It is certainly a city of contrasts.

Geographically, Phnom Penh is a meeting place of two significant rivers, Tonlé Sap and the Mekong. During the monsoon the pressure of water actually forces the Tonlé Sap to flow backwards (north) into Tonlé Sap Lake.  At this time of year Tonlé Sap lake is the largest in South East Asia and is a prolific source of fish.

Relatively close to Phnom Penh are the coastal provinces of Kep and Kampot. The former is renowned for locally caught crab and prawns and for the face that it is a gateway to the many islands off the coast while Kampot is on the world map for its highly prized Kampot Pepper (read our blog).  Our meal there sitting in a boat shed type cafe of stir fried prawns with clusters of fresh green peppercorns is memorable. 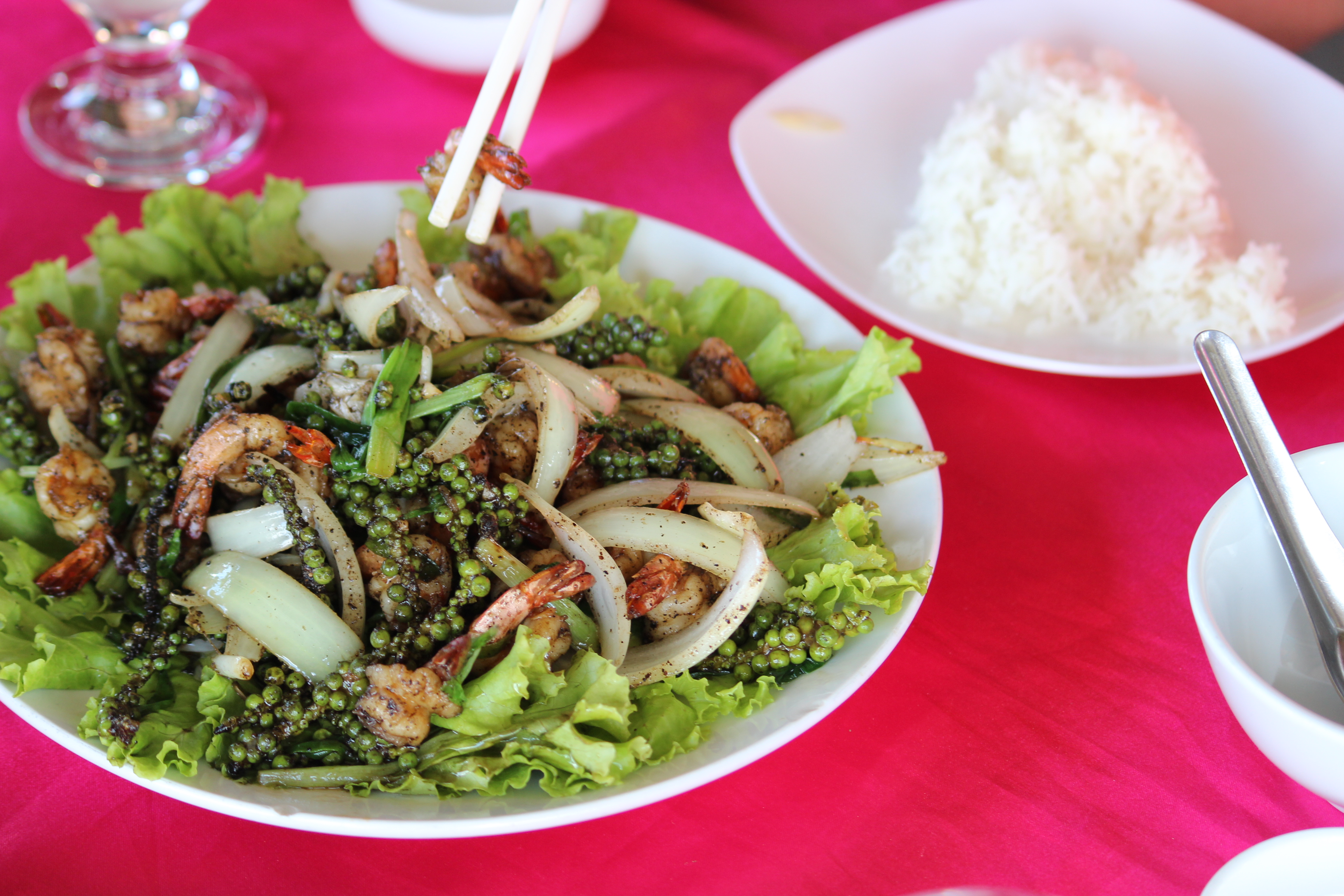 And now that I am back home in NZ I find myself longing for many of the  dishes we enjoyed in Cambodia, particularly the fragrant fresh salads full of texture and flavour that are often based on banana blossom or green mango.
Much of Cambodian cuisine along with other cultural traditions were essentially wiped during Pol Pots regime, but are now slowly re-establishing themselves. Not as spicy as Thai food, Cambodian dishes are most similar to that of their Vietnamese neighbours in that dishes rely on fresh ingredients with plenty of fragrant herbs and as often as not fish sauce or paste.

Those years of starvation forced people to eat almost everything and it is perhaps from that time that tarantulas, crickets, bush rats and red ants were introduced as food and remain as such today.  Fried spiders are considered a delicacy, although I am not prepared to find out why.
Fish Amok is one of my favourite Cambodian dishes, chunks of white fish are gently cooked in a fragrant and mildly spicy coconut broth and typically served in banana leaves or maybe a coconut shell. Back home I make do with mine in a bowl. 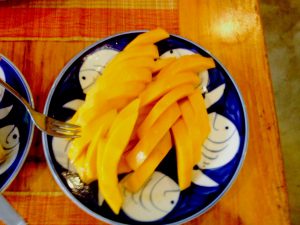 Rich with fresh produce the markets are a delight and among the mountains of almost every conceivable fruit and vegetable I am thrilled to find some early season mangoes. Lusciously sweet and juicy, I make the most of my find as the main mango season is not until April.

My trip to this country has been an unusual combination of pure joy and sheer horror – with a whole lot in between.

As Robert Oliver in the Huffington Post says of Cambodia  “Have you ever visited somewhere and it stayed with you for a time after you left? Not in a nostalgic way, but in a way that lingers, like it has reached in and altered you slightly. “

His words, sum up my brief foray in Cambodia so well.  Yes the people are amazing, as is the food, weather and scenery. Yes we have seen breathtaking sites, bought some bargains, made new friends and now feel fit and invigorated after all our cycling.
But given this country’s troubled past it will take time for us as well as Cambodia to come
to terms with the scars that are still so raw. 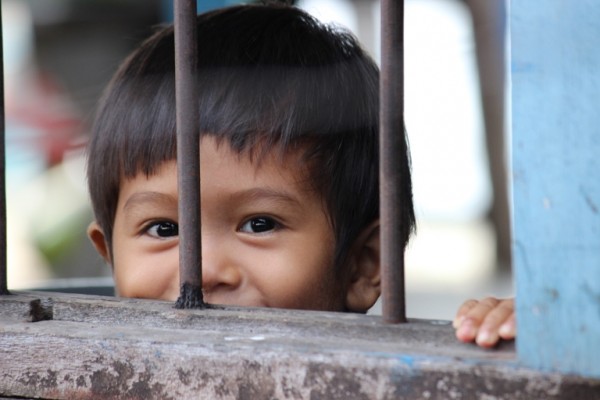 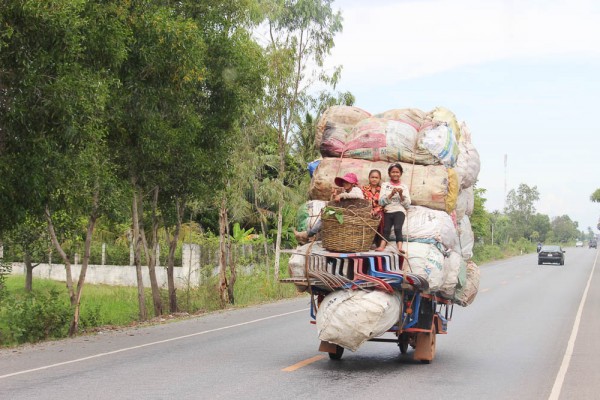 A Little Taste of Mexico