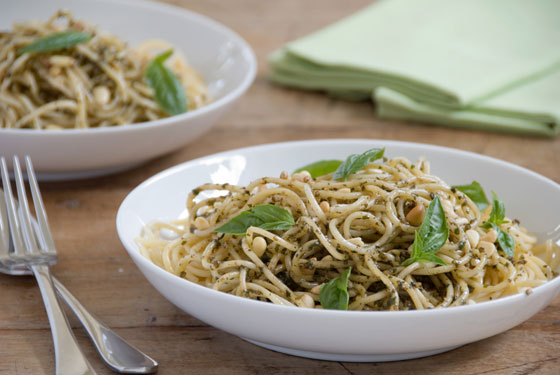 I’m breaking with convention this week.  No more seasonality.  Enough already.  I know it’s bitterly cold out, but there’s only so much slow cooking I can handle.   I don’t like winter, not one bit, and over exposure to slow-cooked stew-y things just reminds me of how far we are from summer.  I find pesto in its various forms and uses a perfect midwinter tonic. With its breezy and evocative taste of sunshine and warmth, who cares if it’s not strictly seasonal?  Don’t get me wrong,  I agree with and largely practise the philosophy of eating seasonally, but I don’t think it needs to be viewed as an inflexible manifesto.  Do the best you can, but not at the expense of all pleasure.

The thing is, I don’t feel too rebellious making pesto in winter anyway because a) my basil plants only kicked the watering can a couple of weeks ago, so by my reckoning we’re only just clear of the basil season and b) hydroponic basil is grown locally all year round.  Not that I’m totally swayed by the food mile dilemma anymore. The more I look at it, the more I find flaws and hypocrisy.  (But more about that in a future article – I need to mull over it a little longer.)

For now, let’s sidestep into summer. For a spell.

Although on its own the word pesto is a simply the generic descriptor for a large family of pounded Italian sauces, to most of the world it is synonymous with pesto alla Genovese , the version made from  basil, pinenuts, garlic, grana cheese and olive oil.  This is the one that was featured on every restaurant menu from Auckland to Amsterdam and in many lurid forms about 20 years ago, and now appears regularly as a potato-chip flavour. You know a flavor has really entered our food consciousness when it turns up as a chip.

But it’s with good reason that pesto alla Genovese has been so readily embraced by the world. However overused it may be, there’s no getting away from the fact that a well executed rendition of the sauce is a virtuoso performance of fragrance, richness and grainy complexity.  It’s versatile stuff too, working beautifully with lasagna , tagliatelle with fresh cream and a little bacon, mixed with sour cream and tossed through roast vegetables, used to baste or marinade a bird   , in pizza and calzone, or in sandwiches with fresh mozzarella and semi-dried tomatoes.  And that’s just the tip of alle Genovese iceberg.

Pesto alla Genovese probably evolved from the various pounded cheese and nut sauces favored by the ancient Romans.  Basil, however has been cultivated in Asia and the Middle East for about 5000 years, but did not get its hooks into European food until around 500 years ago.  It eventually became the go-to herb in the cuisines of Liguria and Provence, particularly in the port cities of Marseilles and Genoa, probably due to the many Arabic and Indian sailors passing through and eventually settling here.  Today pesto alla Genovese is very much loved in Genoa and everyone has big opinions about how it should be made, what basil should be used  and which cheese is best.  Across the border in Provence, pistou is similarly fussed over. This is essentially pesto minus the nuts, and is used most famously in soupe au pistou . Just don’t ask a Ligurian or Provencal which is better; you’ll never hear the end their parochial sniping.  For the record, I think both have their merits; it’s a contextual thing.

Anyone with a mortar and pestle or a food processor is capable of making pesto alle Genovese. Making perfect pesto, however, requires an understanding of the process and, most importantly, knowledge of the sparse but all-important ingredients.

Despite what I said earlier about seasonality, I must concede that hydroponic winter basil is but a pale shadow of its garden-grown summer counterpart.  It gets too much water and not enough heat to develop the optimal clove-like intensity, but sun-starved beggars can’t be choosers.

When choosing basil avoid the giant, lettuce-leafed and purple varieties.  These are more about looks than substance and won’t do for pesto at all.  Keep away from Holy and Thai basils too- wrong flavour altogther. The best pesto basils are the intensely flavored small-leafed varieties- fino verde   and  spicy globe  .  Although not usually available in hydroponic form, these are well worth considering for your summer garden. Use only the leaves and tender stems ; tough stems make for fibrous pesto.  NEVER use dried basil.

Pine nuts are accepted as the standard for pesto, but in Liguria, almonds and walnuts  are popular too.  Personally I find walnuts a bit strongly flavored, but that’s just me.  Pinenuts are lovely but are prohibitively pricey and are often rancid by the time we get them in New Zealand.  As a long term investment you could try growing your own  .  Be warned though that even if you do live long enough to reap the rewards , the nuts are very fiddly to extract from the shell.  Nothing like a fresh pinenut though… But my nut of choice for pesto is the cashew. These are a relatively affordable option, and have a sweetness that works as well if not better than pinenuts.

Pesto needs a robust backbone of strong, raw garlic. I like it to be almost hot with garlic – 5 or 6 large cloves to a cup-sized batch works well for me. Steer clear of Elephant garlic (actually a bulb-forming leek) and those alarmingly white Chinese imports.  Both are too mild for use in pesto and the latter is doing a good job of killing our local garlic industry. Avoid.

They main choices here are imported pecorino, parmesan and grana padano, or the locally produced Meyer Vintage gouda – an excellent cheese however you look at it.  Use cheaper substitutes at your peril.  The cheese in pesto adds salt and a certain meaty depth, as well as helping the sauce to adhere to food when heated.  A cheese-starved pesto will taste thin and grassy, so don’t hold back.

Apart from acting as a binding agent, the oil rounds out the flavour of pesto.  It would be wasteful to use only your best qualityextra virgin table oil , because much of its delicate flavour would be lost under the pungency of the garlic and basil. Try 2 parts cooking grade olive oil to 1 part table oil.

I used to be of the opinion that pesto should only ever be made in a mortar & pestle. The very word pesto is derived from pestle, after all.  Many great food writers concur, suggesting that garlic should only ever be pounded, that basil must always be torn, etc.  Whatever. This is all fine and good but the world has moved on. Food-processor pesto can be just as good as anything pounded, but it will take a lot less toil.  But if you fancy yourself as a stone age recreationist go right ahead.

Pesto does not freeze well. The flavours seem to curdle. If you find yourself with a basil glut (rather unlikely in winter) process it with olive oil – about ¼ cup per cup of chopped basil and freeze.  This can then be used as base for pesto all year around.

So if, like me, you need a flavor break from winter, why not whip up a batch pesto and breath in that summery bliss?

The Rise Of Risotto

3 thoughts on “The Pesto Manifesto”