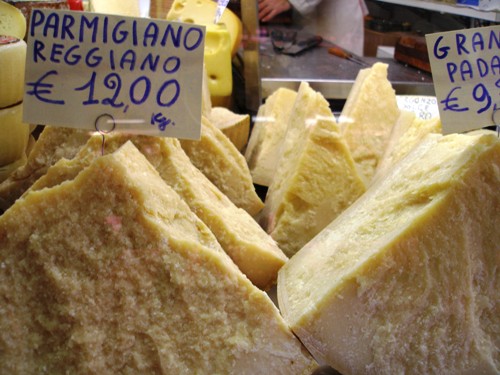 Today the variety of Italian cheese available in New Zealand is broad and exciting, but to many consumers they remain a pricey mystery.  So, being quite the Italio-phile and a prodigious consumer of the nation’s cheeses, I thought I’d help you out a little with the following beginner’s guide to Italian cheeses. Aren’t I nice? Nothing but the basics here, you understand.  All are available in New Zealand, some more widely than others, and all in my very humble opinion are worth seeking out.

This fine family of hard sheep’s milk cheeses is sort of like a sheepish counterpart to the strictly bovine grana clan (Parmesan, Grana Padano etc).  The name Pecorino  is highly generic and can be applied to a wide range of cheeses.  As with all cheeses, age, style and provenance are what truly set them apart from one another

The more common Pecorini sold here are dry, crumbly and rather salty young versions of Pecorino Romano, and to a lesser degree Sardo. These work well in cooking, but to most tastes they’re a little underwhelming on their own.

The name Pecorino literally translates as ‘little sheep’ and the various suffixes (e.g. Sardo, Toscano, Romano etc) indicate the region of production, and to those in the know, the cheese’s individual style.

Mozzarella is a stretched curd cheese- meaning that the curds are mildly acidulated, heated, stretched and folded to impart a filament-like structure, and distinctive elasticity upon heating. Good mozzarella has a delicate texture and sweet milky flavour and fragrance.

Originally the name mozzarella referred specifically to a buffalo milk cheese, while the cow’s milk equivalent  was known as Fior di latte (‘milk flowers’). This distinction has mostly been lost over time, so that now, unless otherwise stated, all mozzarella is made from cow’s milk.

Mozzarella di bufula is however widely available, and even produced here in New Zealand but always attracts a premium price. Although both versions are conspicuously white , di bufula is positively virginal in this regard, and considerably creamier than ‘di latte. In Italy di bufula is usually eaten uncooked in salads, or with a little oil on crusty bread. Cooking with it is considered rather ostentatious with most favouring the cheaper ‘di latte for this purpose.

Note: Bocconici is a size of mozzarella, not a cheese in its own right. The name means ‘little mouthfuls’

Gorgonzola is Italy’s most famous contribution  to the blue cheese cause, and is one of the most revered and feared cheeses in the world today.

The vast majority of Gorgonzola is made from full cream cow’s milk- although a goat milk version does exist. It is truly a cheese to be reckoned with- lusciously rich, opulently creamy with an assertively  ‘blue’ fragrance and spicy finish (thus the ‘piccante’ suffix added to mature versions). The best fully ripened gorgonzola oozes like malevolent honey.

This is not a cheese for the faint hearted, or those suffering any sort pulmonary impairment for that matter. But for lovers of angrily fungoid cheese it is the stuff of pure fantasy. Use sparingly in cooking and generously on a cheese board, with crisp apples, juicy pears a dried figs.

Provolone is the Italian equivalent of supermarket cheddar. It’s a day-to-day work-horse cheese, particularly popular in sandwiches with cured meats and preserves.

Provolone starts its life much like Mozzarella,  as a stretched curd cheese, but is then salted and aged in the form of huge pear-shaped dollops, suspended from the ceiling by ropes. This process gives the cheese its distinctive two-lobed form.

The most common form of the cheese is provolone dulce, but the delicious affumicato (smoked) version is available too. Essentially, Provolone is a mild, slightly rubbery cheese meant to compliment and balance  more robust flavoured foods.

Most of the so-called grated Mozzarella sold here is in fact a rough approximate of provolone.

At its best Parmesan, or Parmigiano-Reggiano is a real class act. With a crystalline yet creamy texture, and a complex fruity flavour, it is everything you could ever want in a vintage hard cheese.

The trick however, is in finding the really good stuff. Far too much of the parmesan sold here is of the inferior reject grade. This is easily recognisable by the X pattern stamped into the rind. Under European law it is cannot be sold as parmesan at all, but these regulations only seem to apply within the EU. The main problem with such cheeses is not whatever minor flaws saw them removed from the production line, but that they are usually far too young for consumption. Parmesan is best at around 2 ½ -3 ½ years old but reject grade cheese may be as little as 1 year old.  It can taste soapy, thin and wholly underwhelming.  So- check the rinds carefully and if possible –try before you buy.

Grana Padano is sometimes seen as a sort of poor man’s parmesan, but this is simply not the case at all. It is a very fine and highly regarded cheese in its own right with a history just as long and complicated as Parmesan .  Parmesan and Padano are however mostly interchangeable in cooking or on the cheese board, providing they are well-aged specimens.

This exuberantly creamy soft cheese from northern Italy deserves to be far better known around these parts. Taleggio is very much a ‘bark worse than its bite’ sort of cheese, with a pungent ripe odour but a delicate flavour.

Like Camembert and Brie, Taleggio has a powdery mould rind and often liquefies as it ripens, making it a superb and rather showy addition to a cheese board. In Italy it is most popular as a grilling cheese- rather like Racclette – and is often paired with vegetables such as radicchio and Florence fennel.  Hailing from Lombardy, Taleggio is also very popular and well placed in the region’s most famous dish- risotto.

There are over 400 officially recognised and EU-protected cheeses made in Italy today, and undoubtedly many others besides.  The above selection is not necessarily the best, but is certainly a good start to life time of Italian cheese appreciation… or obsession as the case may be

The Rise Of Risotto

Cheese at its Best