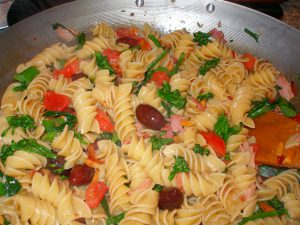 Virgil Evetts
I’ve been thinking about the term ‘peasant food’ lately. It’s become such a clichéd part of the western food lexicon. We use it to describe anything vaguely rustic and it makes us think of crumbling Tuscan farm houses, wood fired ovens and good-natured, salt of the earth country folk. Can’t you just smell that spit roast lamb? Yes, well it’s also deeply patronising. Describing the culinary traditions of rural Europe as peasant-like is about as flattering as calling African American culture slave-like.
I think the only reason most Europeans don’t noisily object is that they know they’re on to a good thing. Ignorance may breed bigotry, but it also breeds rampant stupidity. The attraction of living in a restored farm house is a complete mystery to most Italians. Why would you want to live in a crumbling old dump that has no indoor plumbing and is full of snakes and scorpions? Who cares, if you’re willing to pay a million Euros for it.

But that’s not to say that there isn’t genuinely humble country cooking in Italy and the rest of Europe. Many of my favourite dishes would be described in Italian as cucina la povero. This literally translates as cuisine of the poor, but is meant to be complementary rather than chin-ticklingly patronising. The logic being that cash-strapped folk can work miracles with very few ingredients. I think this is a truth that extends (or at least, used to) well beyond the borders Italy.  We were as poor as particularly down-trodden church mice when I was growing up, but we still ate very, very well every night. But then, I had the good fortune to be to be born into a family that cared deeply about food- more so than each other in some cases. Thanks to the fungoid spread of convenience foods and cheap takeaways, whole generations are now missing out on learning to cook. Jamie Oliver’s School Dinners anyone? I rather fear that that the modern New Zealand equivalent of cucina la povero would either come from a box in the supermarket freezer or via a drive through window.

But I digress; I was talking things Italian…

If you paid too much attention to the advertising campaign of a certain pasta sauce company (the one with the horribly stereotyped puppets) you would think that Italians always smother their pasta (which is the only food Italians eat according to these puppets) in rich tomato, cheese or meat-based sauces. This is hyperbolic at best, and the further south you go in Italy, the more wildly inaccurate it becomes. The harsh climate and poor soil of southern Italy has traditionally made meat, dairy and even tomatoes luxury items. Sure, they still eat plenty of pasta down Napoli way, but it’s often dressed far more frugally than in the relatively affluent north. Gone (or at least less common) here are the Bolognese and Carbonara, replaced instead with simpler but deeply satiating dressings of good quality olive oil, garlic, chillies, perhaps a scattering of salami or pancetta and some seasonal greens. These sorts of dishes are designed to be made in a flash, by anyone – be they a lone shepherd high in the myrtle scrub or an urban mamma with a gang of hungry mouths to feed in a Neapolitan housing project.

Ask a southern Italian what their favourite pasta dish is and they will probably tell you fettuccine al aglio e olio or something very similar. This is just about the simplest recipe imaginable, containing, in its purest form nothing more than garlic (LOTS of garlic), olive oil and seasoning. With deft execution, this is about as good as eating gets. It confounds the taste buds every time. How can something so simple be so damn good?

This, and myriad other oil-based pasta dishes, are classics of Southern Italian cooking. Despite their simplicity they offer some of the best eating of Italy’s vast and varied cuisines.  The ingredients of this family of dishes are either fried or steamed quickly before being tossed together with cooked pasta. There are some established classics such as fettuccine al aglio e olio, which save for a few regional variations, are made according to strict tradition. But, as with fried rice in many Asian cuisines, you can add whatever you have at hand. Just use your best judgement and good taste to match flavours and textures.

Oil-based pasta dishes are best made with shells, orecchiette, spirals or in some cases flat noodles such as fettuccine. These shapes snare plenty of delicious little nuggets of garlic, chilli and other tasty things. Avoid macaroni, penne, and other tubular pasta – these are designed for very wet sauces and won’t work so well here.  I have an irrational aversion to bow-tie pasta (Farfalle). Perhaps it’s because I once worked for a man who wore actual bow ties everyday as his signature dress thing. How I loathed those bow ties…

Anyway – here are a few recipes that are on a regular turn around at my place. As is typical of this sort of dish, they’re quick and easy to make – being far more about assembly than actual cooking – and are an affordable way to feed a crowd. In my experience all of these recipes go down well with kids too, which is always a bonus.

In a dry pan sauté the bacon until crisp. Drain on kitchen paper.
In a deep pan/wok heat the olive oil. Add garlic and chilli, stir until fragrant. Remove from heat. Do not allow to brown.
Bring a large pot of well salted water to boil. Before adding the pasta use this water to either steam of blanch the broccoli- it should still be vibrantly green and slightly crunchy.
Cook and drain the pasta. Return the oil to the heat and add the pasta. Fold in all other ingredients, season to taste .
Serve immediately with a little shaved parmesan, pecorino or fried bread crumbs (recipe below)

In a deep pan/wok heat the olive oil. Add garlic and chilli and anchovies, stir until fragrant. Remove from heat- do not allow to brown. Cook and drain the pasta. Return oil to the heat and add pasta. Fold in any other ingredients, season to taste and remove from heat.
Serve immediately with a little shaved parmesan, pecorino or fried bread crumbs (recipe below)

Chorizo, garlic and other good things with spiral pasta

This is a dish entirely of my own creation. It’s a good example of how well this style of pasta lends itself to improvisation.

In a dry pan sauté the sausage until fragrant and crispy. Drain on kitchen paper.
In a deep pan/wok heat the olive oil. Add garlic and chilli, stir until fragrant. Remove from heat- do not allow to brown.
Cook and drain pasta.
Return oil to the heat and add pasta. Fold in other ingredients, season to taste and remove from heat. Serve immediately with a little shaved parmesan, pecorino or fried bread crumbs (recipe below)

In the past, few southern Italians could afford expensive hard cheeses such as pecorino and parmesan, so to dress their pasta, they came up with this quite passable alternative. These bread crumbs bring a very pleasing crunch and a deliciously salty, toasty tang to each mouthful of silky pasta. They’re also a doddle to make. Roughly zap a few slices of good quality stale bread in a food processor. Heat a generous amount of olive oil in a pan, add the bread crumbs. Stir until dark golden-brown and super crunchy. Don’t be stingy with the salt, these need plenty- blood pressure, be damned.
Drain on kitchen paper or a tea towel.

So whether you’re poor or flush, why not give these recipes a whirl? If this sort of food is anything to go by (and in reality it probably isn’t) poor Italians must eat a damn site better than your average financially buoyant kiwi, don’t you think?

Of Pasta and Pasta Sauce

6 thoughts on “Pasta the poverty line”