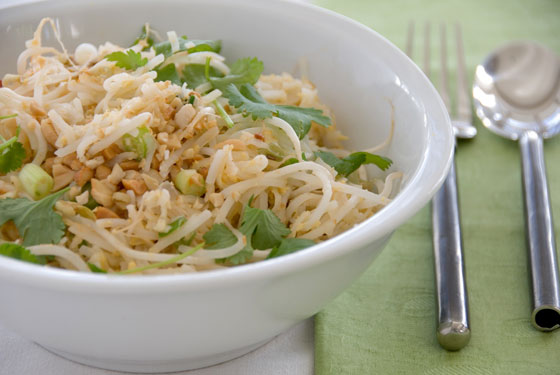 Who can be bothered with the whole galley slave routine this time of year? It’s far too hot to hang about over the stove, and as heat-heckled appetites grow spartan, the food should too. Of course if you want to labour over a rich stew or something equally leaden and steamy be my guest; but personally, until further notice, light and zingy will be the order of the day.

Before I can so much as switch on an element, I need a cool drink in hand. A recent stomach upset and the cloying heat of late has put paid to my appetite for inebriants, and I’m once again enjoying the bitter- sweet charms of iced tea . You might recall I banged on about this last year when our bairn was still a-cooking and I’d opted out of libations (click here if you want a refresher both literally and figuratively).  I’ve since devised a rather nifty iced tea concentrate, which can be made up with iced water whenever you feel so inclined. Bring 1 litre of water to the boil with eight English Breakfast tea bags, the juice of five lemons and two cups of sugar. Allow to steep off the heat for about one hour and bottle.  Dilute to taste and refrigerate once opened.

Revived thusly, I can focus on the flavours and substance of whatever I’ve decided to cook. Call me clichéd, but when I think of hot weather food I rarely stray from a South-East Asian vibe. There are plenty of fine tropical cuisines outside of South East Asia to be sure, but because I’ve travelled widely in this region it’s my first and frankly favourite point of reference.

Just lately I’ve been on a big Pad Thai kick. This zingy mound of noodles, sprouts, peanuts and whatever protein tickles your fancy all bound up in a sweet/sour/salty/hot sauce, is about as perfectly pitched to the Auckland summer as any dish will ever get. Click here for Helen’s first rate take on this classic.

Another seasonal revival doing the rounds at our place is gado gado – the sublime Indonesian salad of steamed vegetables and boiled eggs, dressed with an appallingly good (and highly calorific) peanut sauce. If you’re after a failsafe way of getting your kids to greedily scoff their greens, then look no further.

Despite its reputation for fiery fragrant curries, Thailand is much more a cuisine of expertly balanced and highly nuanced salads. These typically consist of very finely chopped herbs (coriander, lime leaf, galangal, Chinese keys etc), vegetables, seafood, meat and nuts with a lime and fish sauce-laden dressing. Although often served warm, they are among the most refreshing yet oddly satisfying genre of dishes in the vast Thai repertoire. Tread carefully when following authentic Thai recipes though – Thai salads (“Yum” or “Yam”) can be unbelievably spicy, as in you really won’t believe what is happening to your tongue, throat and later, regions best left unmentioned.  But made at home with due care and discretion, they can be edible artistry. Click here for family friendly (ish) versions of Yam and Gado Gado.

But I’m not an Asia-phile though and through (just mostly). One of the few meals that I make every week of the year is pizza. Both of us eagerly await ‘pizza Friday,’ and just as soon as our wee girl sprouts a fine set of gnashers, I’m sure she will too. The beauty of pizza is that with just a few deft substitutions according to what’s in season, it hits the spot year-round. In summer I keep things warm and sunny: vine-ripened tomatoes, Kalamata olives, maybe a few slices of chorizo, dewy fresh mozzarella (fior di latte – bufala is best kept for salads), and great drifts of basil scattered atop when it comes out of the oven.  Although, despite my current iced-tea sympathies, pizza really needs wine and pines away without the brash company of rough and red-y wine.

We’re not much of a dessert family at the best of times, but in summer when I’m even less likely than usual to re-enter the kitchen post-dinner, we lean on the benevolence of our various fruit trees. So far we’ve enjoyed babaco (to the point of comical excess), peaches, plums and brambles. Still to come are bananas, more peaches, figs, apples, capulin cherries and hopefully melons. It sounds smug on many levels I know, but home grown, tree-ripened fruit simply needs no help to shine. Of course it can shine even brighter with a little cream, or a splash of grappa and a dusting of icing sugar.

Ultimately, even to the keenest cook, time spent in the kitchen between now and around mid-March can seem like servitude. Until then forget about any elaborate culinary ambition and stick to effortlessly tasty creations using summer’s abundant, affordable and exquisite produce.

Try this stunning recipe from Kapiti on for size! 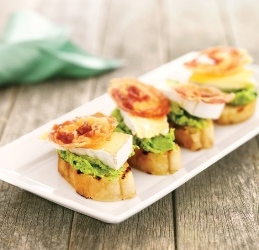 Put the beans in the blender and blitz with some olive oil, but still leave a little chunky. Place this in a bowl and add the garlic, a good squeeze of lemon, 2 tsp of good Dijon mustard, the chopped herbs and some salt and pepper then combine.

Add more lemon juice, salt and pepper until the desired taste is met. Bake pancetta between two flat trays at 170 degrees until crisp, then reserve. Spread a good amount of the hummus on the grilled bruschetta, and then top with the Brie, a little olive oil, and the crispy pancetta. 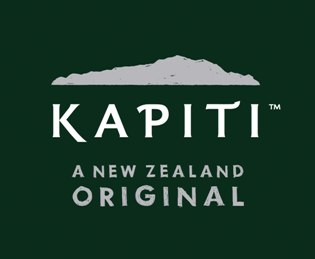