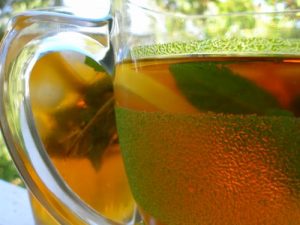 My current hiatus from wine and other delectable inebriants (coupled with typically oppressive high-summer weather) has forced me to plumb the depths of sobriety for a range of refreshing but chaste alternatives.

Actually the break from the demon drink has been a welcome test. You see, I have habit of obsessing over small things. Dad has had his issues with the bottle so I’ve forever been fearful that my fondness for a tipple might be a sign that I’m heading down the same sordid street- despite my rather modest intake.

Well apparently it isn’t. Having tossed it all in for a 9 month solidarity sabbatical, I realised very quickly that I don’t really need, or even miss, the softening effects of polite society’s’ drug. What I’m more attached to is the fair and gentle sense of calm that comes from sitting with a glass in your hand, reflecting  and breathing out just a little before the night overwhelms you completely. The contents of the glass, I have discovered doesn’t really matter.

Now before I go any further, I’d like to assure you that this is not some sanctimonious prohibitionist piece. I enjoy wine and a number of its kin immensely (yes, yes, in moderation) and have every intention of relapsing just as soon my best beloved is free of the foetus and able to imbibe with me in the vine.

Apart from the occasional tryst, I’m not much of a tea drinker. I just don’t see the point of the stuff, but I’ve learned to make an exception, (in the parched interior of summer at least), for iced tea. In fact it’s become my trusty social side kick these last few months.

In recent years, thanks to the efforts of Lipton, Nestlé and one or two other minor players, iced tea has become an almost mainstream soft drink around much of the world. Unsurprisingly these readymade approximates are a pretty long ways from what most people would call tea, irrespective of frigidity. ‘Tea-like’ substance might be more accurate. But credit where it’s due – dubious provenance and preposterous flavours aside, ready-made iced tea can be perfectly drinkable stuff, when needs must. When you’re lost in the Western Desert with nowt to drink but a flask of peach Nestea, for example.

However there is a big difference between drinkable and dreamy, which is what the best ice tea really ought to be.  Not a word I use freely, or even very comfortably, but if the hat fits, you know. Real iced tea, homemade and by the jug, can be a drink worthy of high praise and the deepest draughts.

Although it’s popular all over in various tame and elaborate guises, iced tea has acquired a uniquely fanatical following in the USA, particularly in the cloying, devout states south of the Mason-Dixon. Recent research conducted by tea industry marketing-monger types indicates that upwards of 85% of all tea consumed in the United State is in the form of iced tea, most of which is indeed quaffed down south in bayou country.

I’m yet to travel to the Deep South myself, but have pieced together a pretty good understanding of the regional culture from television, which like the internet, never lies. In a nut shell I can tell you this of the Southern USA: it’s full of vampires, pecan pie and iced tea. And the odd hurricane too.

In fact, according to my favourite series of the moment, True Blood (based on Charlaine Harris’ wickedly trashy and darkly comical Sookie Stackhouse novels), the good folk of the steamy south spend their days languishing on porches, drinking gallons of iced tea and shooting the breeze in their deliciously Cajun inflected drawl. This is all frightfully attractive to me, even if what goes on at night in the True Blood universe is a little less my – ah-hmm – cup of tea, what with the blood drinking, inter-species sex and all.

So, inspired by Sookie Stackhouse and her polite, if rather vapid, southern sensibilities, I bring you…

Bring the water to the boil with the sugar. Remove from heat and add tea bags. Allow to cool and add lemon juice. Remove tea bags and strain through a sieve.

Refrigerate until fully chilled. Serve over ice with a slice of lemon and a sprig of bruised, fresh mint.

Note: Sweetness can be adjusted to taste. In the true spirit of the North American palate, most ‘authentic’ iced tea recipes suggest quite staggering quantities of sugar. Personally, I value my teeth and lack of diabetes, so have taken a more conservative approach, but hey- it’s your funeral.

Angostura  does contain alcohol but with the proportions used here or in any halfway sane recipe, you’d get a bigger buzz from an over-ripe piece of fruit.

Various fruit based and herbal teas can be used in place of the more traditional ‘gumboot’ prescribed above, if you’re that way inclined. Personally I find most of the beverages in that whole hibiscus flower and dolphin sphincter genre tend towards a rather predictable formula of alluring fragrance and flaccid flavour. Suit yourself though.

So effectively and completely has iced tea replaced wine in my life (for the time being) that I find myself salivating at the very thought of a tall, cool glass from around 4:30 each day. How sad am I?

Do you have favourite non-alcoholic summer-time tipple? I’m all ears for inspiration! 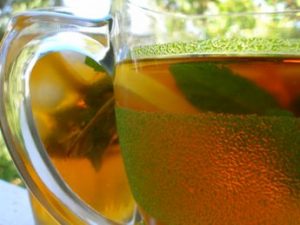