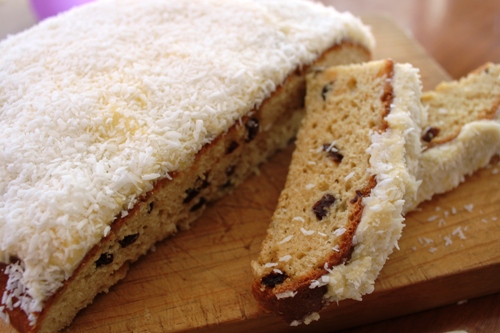 When I was very small, I couldn’t be reasoned with about Sally Lunn. To my mother’s vexation I refused to allow so much as a sliver to pass my lips, but greedily wolfed down other very similar breads. Eventually she learned I was under the bizarre misapprehension that it was called ‘Sally’s Lung’ and had some unspeakable connection with offal. As I recall, my sister had some  part to play in this confusion.

Once disavowed of this nonsense, I fell in love with Sally, or with her the buttery, coconut-strewn icing anyway. The bread I could take or leave.

That was a very long time ago. Well over 30 years. Bakery fashions have changed, and so many of those old-fashioned standards, have become… well somewhat less than standard. Until very recently the last time I could remember eating a Sally Lunn was at intermediate school. Our tuck shop sold Lunns and various other things sweet and delectable, and a friend and I would partake every morning before classes. That friend, who really ought to remain nameless, was not in possession of a physique that needed much in the way of enriched breads, and I fear I may have led him astray.  Halfway through those disjointed Intermediate school years , a group of  tediously well meaning parents forced a doer purge of the tuck shop, which meant goodbye beloved Sally, and hello… fruit.

Anyway, I was reminded again of Sally Lunn recently when an elderly friend arrived for morning tea with a fine example in hand. She’d found a bakery nearby that specialises in Penny Lanes-era baked goods. Sally was just as I remembered her, thick buttery icing (made with salted butter, naturally), drifts of barely adhered desiccated coconut, and an inoffensive but fairly unmemorable raisin-strewn bun.   She got me thinking.

Now you must know of me by now that I’m not one to take a recipe lying down. I need to know how it works and where it came from, so I began to dig around. Turns out the history of Sally Lunn is strewn with more mistaken identities than a Shakespearean comedy, and had, by the time it arrived in New Zealand, mutated from a second cousin to a brioche into something akin to a dumpling.

The original Sally Lunn first appeared around the mid 1600s in the English town of Bath. This rich, buttery tea bread featured neither raisins nor icing of any kind, and was served with lashings of butter.  The recipe- still widely used today- is often attributed to a strapping French émigré, one Solange  Luyon, who according to a suspiciously Molly Malone-esque myth, peddled the buns from a cart around Bath’s ancient cobbled streets, presumably to the call of ‘ooo will bay may loveryly buns?’ or similar. With her baked goods turning heads,  Luyon splashed out on fancy tearoom digs, and her cakes entered the history books.

The only trouble is, there is no proof that Ms Luyon ever existed (despite a small museum existing in honour) and quite alot of evidence to suggest that most of the above story was invented during the 1930s to drum up business for a local tearoom, which claimed to be the home of Sally Lunn   What is far more likely is that the cake named Sally Lunn is a bastardised version of the French Sun and Moon cake (soleil et lune), probably introduced to Bath by a French baker (who in all probability would have been male) in the late 1600s.  Despite this far more plausible explanation, the myth of Sally Lunn/Solange Luyon continues, and is rather crossly defended by many an English baker.

The versions of Sally Lunn produced  in England today remain mostly very true to the 18th century ‘original’. Very occasionally they are flavoured with lemon zest, but nothing more. There does seems to be a bit of regional debate about whether clotted cream or butter are the most appropriate accompaniments but you will never hear mention of icing- let alone coconut

So what happened to the English Sally Lunn when it reached New Zealand? How did it change so completely?

Bizarrely it would appear that while the name was adopted by kiwi bakers in the mid 1900s, the recipe seems to have vanished en route.  The thickly iced fruit bread we call ‘Sally Lunn’ bears no resemblance at all to its English namesake.  Put very simply, it is completely different bread. In some parts of New Zealand – particularly in the South Island – this bread/cake /fraudulent confection is called a Boston Bun, although even more confusingly this appears to have no connection to  either the US or UK Bostons and their respective  baking traditions. As far as I can tell, traditional Bath style Sally Lunn has never been commercially produced in New Zealand. My personal guess is that the bread passed off here under that name is made with  very similar recipe to hot cross or pink buns, plus or minus a few embellishments.

Many New Zealand Sally Lunn and Boston Bun recipes rather alarmingly include mashed potato. Potato was frequently used to bulk out baking during the years of war time rationing . You’ll not find anything like that here. Rationing ended in 1950 you know.

In making my own Sally Lunn, I decided to work up from a traditional English recipe, and incorporate my favourite aspects of the New Zealand version i.e. the raisins and icing.

Dissolve yeast in a little warm water with a pinch of sugar.

Beat together milk, cream, butter, eggs and yeast. Combine with flour, raisins and lemon zest. Knead into a smooth, elastic dough/batter. Note: This much easier if done in a mixer.

Bake at 190c for around 20-25 minutes, until golden brown in colour and a skewer inserted into the centre comes away clean.  Allow to cool on a cake rack.

To make the icing beat together butter, sugar and lemon juice until pale and fluffy.

Serve with plenty of strong tea or coffee.