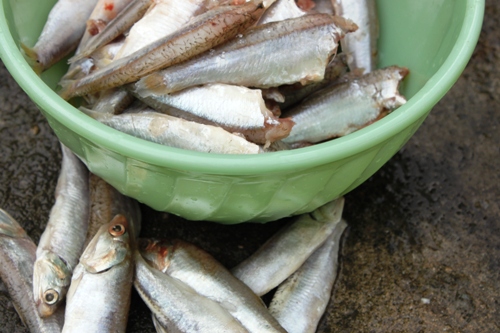 Pity the poor anchovies. In the minds of many they’re a thing of derision: too fishy, too salty, too pungent and rank.  But the joke of it is that even the most committed anchovophobes wolf them down unwittingly in everything from Worcester sauce to the best Thai curries. Like it or not, the anchovy is an insidious dark horse, bringing depth and complexity to dishes spanning untold cuisines and thousands of years. It has built fortunes and nourished empires.  Without question, anchovies are amongst the most important foodstuffs of all time. So it’s time to adjust your thinking.

I don’t mind admitting, I’m no great fan of the unaccompanied anchovy – irrespective of quality. They’re just too salty and strong. But for the most part, this is not the function of the fetid fish. They are better thought of as strange little stock cubes. Treated as such they impart a deep, indefinable meatiness to pasta sauces, soups, pizza, salads dressings more.

Curiously, the influence of anchovy is rarely ever fishy (unless overused).  As a cured and fermented product they are somewhat removed from their piscine origins, and are rarely added to seafood dishes. As a rule, anchovies show a greater affinity for flavours of the land such as red meat (especially lamb) and tomato based sauces and stews.  But irrespective of how we regard anchovies in the kitchen, they are- or at least were at one point – actual fish.

The name anchovy can refer to several allied species of fish related to herrings and pilchards. They are found in shallow coastal waters of all but the coldest parts of the world, including New Zealand. As one of the most abundant small fish in the sea they are an important food source to pretty much everything predatory, from mackerel to whales. And that’s  before humans enter the fray.

We’ve been catching anchovies for thousands of years. As a naturally fatty fish, anchovies are an excellent source of energy, and of course protein, and although highly perishable (like all fish) they are easily preserved by drying (as is still practised throughout Asia) or salt-curing.

The salt-cured anchovy (the one you think you hate) is a truly ancient food. The Romans consumed them, but mostly as a by-product of their most famous – and some might say dubious- gift to the culinary world: garum.  Garum was in many ways analogous to Thai sauce. It was the liquid run-off produced by salting and pressing anchovies, and was used in almost every recorded savoury dish of the Roman era. Evidence of Rome’s vast and lucrative garum industry has been found all around the Mediterranean, in the form of ruined processing plants, store houses and even wrecked garum freighters. Fish sauce (Thai, Vietnamese and others) is so similar to garum that some historians believe it to be the same product, introduced into the South East Asian region by Roman traders in ancient times. 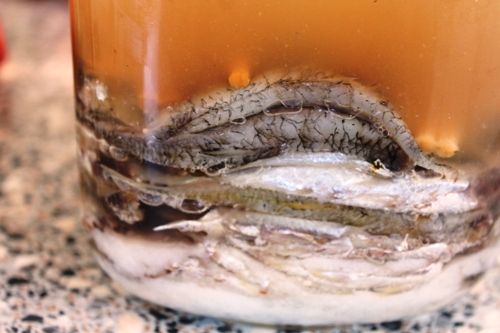 The modern salted anchovy is made in much the same way as garum, except we  now dispose of the liquid and value the solids. Fresh anchovies are beheaded and gutted, usually in single movement  by hand. They are  laid down in barrels between alternate layers of course sea-salt, (and occasionally bay leaves) before a weight is placed directly on top.  Over six months or more, the salt liquefies and draws water and oils from the fish, which are by now fully submerged in the brine where they gradually ferment. The fish are then drained, rinsed, filleted and packed in oil or re-salted and canned whole. The latter version is considered the best by those in the know, but they’re impossible to get hold of in New Zealand. So naturally I’ve set about making my own. Pictured above is my progress so far. Stay tuned for updates…

When buying salted anchovies look for big, pinky-brown fillets packed in clear oil. Most supermarket brands will have come from the same places (Morocco and Tunisia) so are of a similar quality. I’ve never actually found bad anchovies. The very best available locally are the Spanish Ortiz brand. Although bank-bustingly pricey, these really are good enough to eat straight from the tin – and that’s coming from a guy who’d out-law tinned fish if he could…

Dried anchovies are popular in many Asian cuisines. These are the crispy little fish that are deep fried and served with the traditional Malay breakfast, Nasi Lemak.  They’re available by the rather whiffy bag full from Asian supermarkets. As with salted anchovies, they taste far better than they smell.

Fresh anchovies are hard to find in New Zealand, but occasionally turn up in larger fish markets, usually pre-frozen but they’re still very good. These are best grilled with lots of olive oil, oregano, lemon juice and pepper, or filleted and “cooked” in lemon juice, garlic, chilli and olive oil. As with fresh sardines, they’re a woefully underrated fish in these parts, most end up as bait.

But enough with biology, provenance and endless variety. We’re cooks here first and foremost.  So how can I convince you to use anchovies?

The following few recipes from the Foodlovers archives all use anchovies to some surprising effect or another. If these don’t teach you to value this transformative little fish, nothing will.

Basically a Tuscan twist on chicken liver paté. Here the anchovies work by rounding out the bitter edge of the livers and adding a deep, smoky background note. Deserves very good bread and no lack of wine.

Rubbed into the lamb along with garlic, olives and various herbs, the anchovies accentuate that gorgeous lanolin-spiked lamby flavour. Miraculous.

The anchovy’s affinity for big, meaty brassicas is never more apparent than in this dish. Simple, but brilliant stuff from central Italy.

This famous parsley driven sauce is extraordinary smeared on roast meats, mopped up with crusty breads, or splattered over salads. Without the umami influence of copious anchovies it would just be a forgettable paste of rank herbs.

20 thoughts on “Why Anchovies Matter”