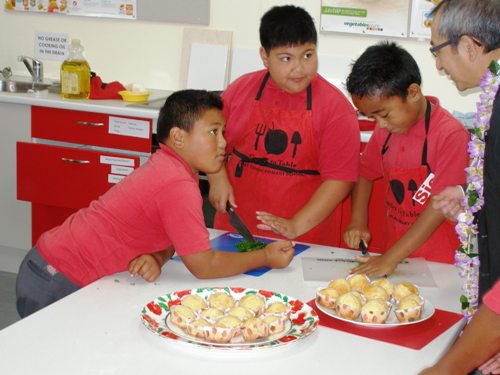 A few years back, HRH Prince Jamie of Oliver did a sterling job bothering UK schools, parents and politicians into making some pretty far-reaching changes to the way they approached child nutrition, through his super-hyped School Dinners campaign.

Yes there were budget blow-outs, yes there were subversive mothers peddling chip-butties at the school gates, but overall, this was a sincere and groundbreaking success, not to mention a herculean effort from a man who doesn’t really need to get out of bed anymore.

This  is just one of many similarly focused programmes that have emerged around the world in recent years in response to the worrying degree of cluelessness and misconception many children demonstrate about  food and nutrition.

In many, many homes even right here in verdant and bountiful New Zealand, food and nutrition are not discussed. Even if there is an actual dinner table around which to deconstruct such issues, television often takes precedent. As a result, today our world is  increasingly awash with children and young adults who believe cheese comes from chickens, lamb chops are made in factories, and bread is a kind of vegetable.  ‘Health’ is seen as a judgemental word, sustainability is an entirely abstract concept and quality equates to recognised brands and convenient packaging. This isn’t a matter of lazy choices, as is sometime suggested; it is often behaviour learned over several generations.  Nor is it exclusively a disease of the ‘under-class,’ as the financially buoyant may like to imagine.

If you’ve read this far then I’m probably preaching to the well and truly converted. More than likely, your children have a reasonable understanding of where their food comes from, how it’s prepared and how it affects their wellbeing (even if they do routinely ignore this last one). And that’s great. But the thing is, you and I are the absolute minority. For many different and complex reasons, this basic knowledge just isn’t getting through to the majority. We can quietly tut and shake our heads, thank our upbringing that we’re not like that.  But this is not just some small-scale tragedy that we can afford to smugly watch from afar -project this societal mess forward 50 years.  What affect will several billion nutritionally and environmentally ignorant consumers have on the already fractured planet? How will even the most robust healthcare system afford the costs of treating a morbidly obese and diabetic population? What will become of the great culinary traditions that define so many cultures today? At this risk of trumping myself in the art of dystopian high drama, let me conclude this miserable interrogation with one irrefutable fact: ignorance begets ignorance. Yet ignorance is so completely treatable.

It’s very easy to see why the right royal Essex boy, Slow Food, Stephanie Alexander and many others in the world of food media have established or contributed to school-based programmes designed to encourage children to care about food, to understand where it comes from and the relationship between diet and well-being. Although generally speaking, I find nothing less appealing than pithy celebrity endorsements, I can see a true nobility and importance in this particular cause.

The first such initiative to emerge in New Zealand schools (excluding the woefully funding deprived and somewhat differently focused Enviroschools programme) is the Garden to Table programme.

Based in schools, Garden to Table aims to instil in children a love of food, cooking and horticulture, as well as an understanding of how their actions and choices impact upon the natural environment.

One of the core values of the programme is the notion that involving children in the growing, harvesting, preparation and ultimately sharing of food will positively affect the dietary choices they make throughout their lives.

This week I attended the official launch of the Garden to Table programme at East Tamaki School in South Auckland. I don’t think I’ve ever been so completely and rapidly smitten with a cause.

East Tamaki School is one of three pilot schools in the programme (with many, many more on the waiting list). Upon arrival and in a gesture of true South Auckland Pasifika hospitality, we were presented with leis and partnered up with student hosts. Year 5 student Jenny literally led us by the hand and down the garden path. 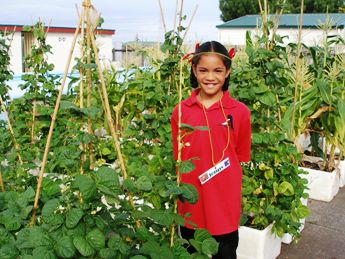 The school garden is a vast and immaculately managed series of beds, borders and tubs. Row upon row of magnificently vital beans, beetroot, silverbeet, brassicas, pumpkins, zucchinis, melons, taro, herbs and more are carefully tended by an army of earnest, but enthusiastic, student gardeners. Flanking the beatifully managed vegetable beds is a small orchard in the making,  comprising of apples, plums, feijoas, figs, citrus, olives, guavas and various other food-bearing trees.

With the help of specialist staff and volunteers the students have hands-on involvement in all aspects of the garden’s organic management, from the sewing of seeds to pest control, fertilising, harvesting the crops and eventually composting the waste. The students I spoke to were highly knowledgeable about their various crops, were clearly having a great time of it and showed genuine pride in the work. Despite my years of experience and best efforts, this garden puts my own to shame. 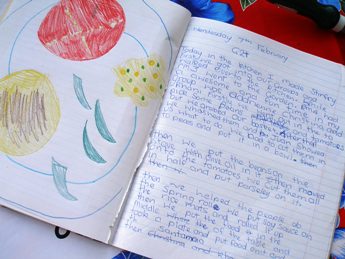 As per the core values of Garden to Table, the school also has a fully kitted-out kitchen, where students learn to prepare their harvest. They are introduced to various cooking techniques such as stir-frying, baking, steaming and stewing through numerous different recipes, and drawing on a wide range of curriculum topics such as maths, science and health. A conscious effort is made to avoid heavily loaded terms such as healthy/unhealthy, good for you/bad for you, instead allowing children to develop their own informed, but unprejudiced, views on nutrition.

The programme is run by the Garden to Table Trust and is modelled on and endorsed by the highly successful Stephanie Alexander Kitchen Garden Foundation in Australia. The trust is supported by a number of high-profile sponsors, who have in the case of East Tamaki School provided equipment to the value of tens of thousands of dollars. It is hoped as the programme moves from trial to wider implementation that it will also attract Government support.

I’m certainly prone to the odd bout of hopeless gloom about the future of our species, but the work being done by Garden To Table and East Tamaki School fills me with a real sense of optimism. It’s such a tired cliché, but the fact is, kids really are where it’s at. What greater way to empower future generations than to teach them to love good food and to care about their environment, their health and each other?

To find out more about the Garden To Table trust visit www.gardentotable.org.nz 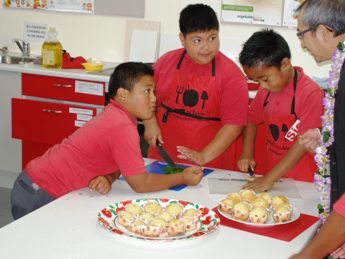 Bali with Our Teens