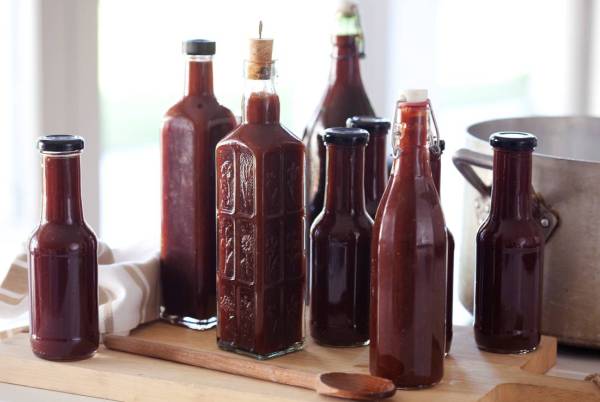 1. Place the tomatoes and onions into a large heavy based preserving pan.
2. Cook over a gentle heat until a reasonably amount of liquid has been released and then add the sugar and salt.
3. Tie the peppercorns, cloves and allspice in a piece of muslin and add to the pan.
4. Gently boil the mixture for 2-3 hours until the mixture is thick, stir at times.
5. Pass the sauce through a mouli to remove seeds and skins. Alternatively you can remove skins manually and puree with a blender. Return sauce to the washed out pan and bring to the boil. Remove from heat and add acetic acid and cayenne pepper, stir to combine.
6. Pour the sauce through a funnel into sterilised bottles and seal when cold.