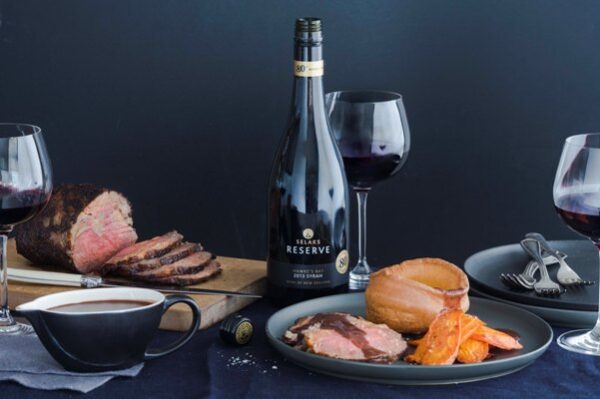 A spectacular dinner for friends matched with Selaks Reserve Hawke’s Bay Syrah. The Dutch babies will be a hot topic of conversation at the table as they will have risen like the best soufflé style Yorkshire puddings. My mum often cooked these with our roast dinners and I can tell you they will be great to mop up the delicious sauce in this recipe.Match with Selaks Reserve Hawke’s Bay Syrah
Serves 6-8

1.5kg Scotch fillet or Sirloin
3 carrots, peeled and sliced on an angle about 2 cm thick

You can make them whatever size you like – they’ll even adapt to being cooked in one large dish. A word of warning, though: avoid putting them too high in the oven, or when they rise they will stick to the top of the oven. Cooked individually, they can be hollowed out and filled with soup. Make the batter at least four hours before baking, or a day ahead.

Place the eggs, flour, salt, milk and melted butter in a blender, cover and blend for 30 seconds at medium speed until smooth. Scrape the sides with a rubber spatula and blend again. Cover the batter and set aside for up to four hours at room temperature, or chill overnight.
Preheat the oven to 220°C. Using ½ tablespoon of shortening for each, grease 6 x 400ml ovenproof ramekins and place in the oven for 5 minutes or until super-hot.
Pour the batter into the hot ramekins return to oven and bake for 15 minutes. Reduce the oven temperature to 180°C and bake a further 5–10 minutes until the edges are puffed and golden. Remove from the oven and serve immediately.

Using lard instead of vegetable shortening will give the Dutch babies a delicious flavour and if you don’t have ramekins, muffin tins will work perfectly.

Preheat the oven to 185°C. Remove the beef from the marinade and dry with paper towels.

Slice the carrots and toss in the remaining marinade and pour on to a roasting tray. Place the beef on top of the carrots and marinade. Place in the oven for 45 minutes or until it reaches an internal temperature of 53-55°C for medium rare. Remove from the oven and place on a cutting board to rest for 20 minutes. Strain the juice and set aside reserving the carrots to serve with the beef.

Into a saucepan place the Selaks Reserve Hawke’s Bay Syrah, Simon Gault Home Cuisine Moroccan seasoning and mustard. Reduce by half over a high heat. Add 1 cup of water and Simon Gault beef stock. Bring to the boil then reduce to a simmer. Mix the cornflour and cold water together and whisk into the sauce to thicken. Remove from the heat and pour into a gravy jug.
Slice the beef and serve with Dutch babies, carrots and gravy.
Pair with family, friends, laughter and a glass of Selaks Reserve Hawke’s Bay Syrah.