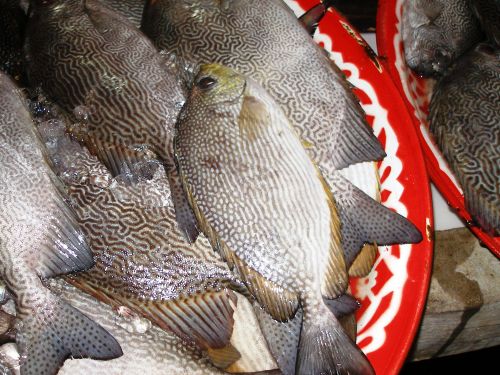 I’m going through a bit of internal conflict just now. Fish. I enjoy eating it or them very much, and considering some of the other things I eat, the nutritional benefits can’t hurt either. No I don’t enjoy the steep prices of fish these days, but that is not where my discontent lays.  It’s my niggly, needling ethics that are really getting me down. It’s been said that too much knowledge can be bad thing, and when it comes to enjoying a rich and varied diet this is certainly true. To be a truly happy and unencumbered foodie, the less one knows about biology and ecology the better. So, without further ado, please allow me to inform you of a few cool, wet facts, and thus share my unease.

It is barely hyperbolic to say that Homo sapiens have roundly raped, pillaged and defecated in the oceans for thousands of years. We have gathered and consumed almost all they had to give, pausing only very recently to assess the scale of our damage and put in place cynically motivated quotas and size restrictions. That we still view the oceans as a larder for the heaving masses (all 6 billion of them) is extraordinary.  Try as I might, cannot find a way to reconcile all we have done and continue to do in this regard with my love of fish and other seafood.

I have no qualms at all about eating animals per sé. As long as the animal in question has lived well and been offed humanely, I’m more than happy to tuck in. But my appetite withers somewhat when the main attraction is among the last of its kind.This is not a concern with livestock such as pigs, cows, sheep and poultry – these species are all in rude health, and are rather ironically afforded permanent protection from extinction by virtue of their deliciousness. But wild-caught seafood, particularly fish, are an entirely different, kettle of, well… fish.

As an expository case study, you don’t get much better (or worse) than the recent history of our very own snapper fishery. Snapper are our most beloved food fish (although eclipsed by blue cod in some parts of the south), and were once among the abundant in northern waters.  As a coastal schooling species (i.e. easily netted close to shore) with excellent eating properties, they were always an easy and popular target. But as our population grew, and fishing methods became more mechanised and effective, our snapper populations showed alarming signs of decline. But worse was yet to come. As foreign fisheries in Asia and Europe collapsed after centuries of unchecked and increasingly industrialised plunder, demand for relatively untapped species like New Zealand snapper surged. Snapper became a precious commodity, and we flogged it abroad for all its considerable worth. And we merrily kept going (particularly in the conveniently accessible Hauraki Gulf), until we came perilously close to the species’ tipping point. This is the minimum population point beyond which a species cannot easily recover. This tipping point is different for every species and is dictated by a complex web of factors.  Well-known examples of species that have fallen well beyond their individual tipping points include Kakapo, Black Robin and Takahe. It is doubtful that these species will ever return to self-sustained natural populations, with the possible exception of the black robin.

Snapper, even at their most diminished state, were never close to total extinction, but they were close to localised extinction in overfished regions, and certainly faced dangerously protracted interruptions to breeding cycles. Fortunately the fishing industry and the government recognised that something needed to be done.

But what do you do when a commercial fishery is threatened by over fishing? Close the fishery in the interests of future profits? No doubt this would help, but then what do all those snapper-dedicated fishing boats turn to? And what happens when you reopen the fishery in a decade or two and the market no longer recognises the species? Very reasonable questions from a business point of view, but do the needs of big business really outweigh a species’ fundamental right to endure?  Of coarse not, but money talks in fact it positively roars.

So snapper quotas -outdated by decades- were adjusted, size limits reduced by another cm or two and all invested hoped for the best. Those partial to the mild flaky fish muttered darkly as prices steadily climbed to seemingly absurd levels. Species once regarded as second rate fish (such as terakihi) soared in popularity, and snapper became- and remains – a luxury fish.

So, now many years on, have these stock management/conservation measures affected any meaningful change?  Rather depends who you ask. Fisheries flunkies can roll out various heartening statistics about snapper and kahawai regeneration in the Hauraki Gulf .These figures are undoubtedly accurate at face value, but must be seen in a broader context. Fishery statistics are taken from average catches of landed fish – in other words, only fish of legal size are countable. It is therefore entirely possible that much of what we are assuming as population growth is simply the inevitable spike of fish that have reached maturity during the years of protection.

More importantly though, the ecosystems which snapper once occupied as apex predators (the ones that eat everything else), have been catastrophically altered by their absence. For example, in many regions sand flat shellfish beds (cockles, pipis etc), already under extreme pressure from excessive harvesting, are unable to regenerate because of a population explosion among voracious paddle crabs- a species previously controlled by snapper. There is now a suspicion among some marine biologists that the recent increase in toxic sea slugs numbers on some Auckland beaches may be related to another snapper-centric imbalance. When a species falls into serious decline, the damage to its entire environment can be vast and almost unstoppable. Simply leaving well alone for a decade or two is no guarantee order will be restored.

So what does this all mean to you and me as consumers? Obviously it is a matter if personal ethics.  Personally, I don’t believe it is acceptable to push any species to the edge of  extinction or wreak havoc upon an ecosystem for any reason. Despite our innate sense of entitlement, as a single species removed from any natural food chain we simply don’t matter that much. Nor do we even need fish to survive in the developed world.  Certainly it’s very good for us, but these nutritional advantages can be found elsewhere.

So, then should we simply boycott “bad” fish like snapper or tuna etc, and focus on less popular species? This has certainly been my approach in recent years, but unfortunately it has been the approach of much of the food service industry too (for economic rather than ethical reasons methinks). As it stands now, species like Terakihi do not have a very rosy or populous future.

Perhaps it’s time then for an all out boycott ?  Only problem is, New Zealanders have something of  the ‘roaring mouse’ syndrome. Our population is  tiny, and however lofty and noble a stance we take on this issue, our fishing industry really doesn’t need us.  It would be the easiest thing in the world to sell our entire catch and more to foreign markets. So even if the whole nation (all three of us) gave fish the cold shoulder, the fishing industry would adjust and probably be better off in the long run.

Then surely the answer – the karmic ‘get out of jail free’ card – lies in aquaculture. Well, theoretically yes. Only trouble is, salmon and tuna, the preferred species for farming for western markets, are predators. As such they need vast quantities of animal protein in order to reach a saleable size. At present the primary ingredient in pelletized salmon and tuna feed is other fish. Each kilo of farmed salmon or tuna takes several kilos of wild caught fish to produce. The same is true of wild salmon and tuna, but farming creates populations far greater than could ever be sustained in the wild.  In the long run this colossal false economy may be more ecologically destructive than fishing from the wild. But there is hope yet. Commercial feed can also be sourced from meat and seafood industry waste and even soy protein- although both present potential problems for human health and food production. Alternatively, we may need to adjust our tastes. Western consumers typically favour the flavour of predatory marine fish species, because that it what we are used to. Many herbivorous freshwater species (such as carp) are far easier to farm, and more profitable to farm on account of their cheaper plant-based dietary needs, but western consumers often find that such fish taste muddy and insipid. If we can get over this relatively minor hurdle of perception, we may never need to feel guilty about eating fish again. That said, I tried carp once and frankly I’d sooner starve than subsist on its swampy tasting flesh. At least I tried.

For me fish is an occasional treat. I can’t afford it be anything more. I follow the advice given by the Royal Forest & Bird Society in their “Good Fish” guide as far as is practicable and palatable. I opt for species that are more often line-caught than netted – such as gurnard. I eat farmed salmon occasionally too, not because I agree with all of the industries current methods of production, but because I believe in its future. The rise and rise of fish farming is an inevitability.  With the best of intentions here and worldwide, it is only a matter of time before wild commercial fish becomes largely a thing of the past. Probably not in the life time of anyone reading this now, but it will happen. It must.

Until then, especially in a country as small (and dare I say it globally inconsequential) as New Zealand; we can only really do our best individually. Shunning fish altogether is not sending any real message to the Government or the Fishing industry.  This may sound a bit defeatist and glum but it’s true.

Each of us though, as members of the dominant species, has a duty of care to all others. That’s just the deal, and it is up to each of us to act upon that duty as well as we can. However, it’s not for me to tell you what that means.

Morality is a bugger sometimes don’t you think?

Thanks to Lucinda, Jo & Will for rekindling my fish-dilemma fires…

5 thoughts on “Fish- An Ethical Minefield”