Home » The boys are back in town 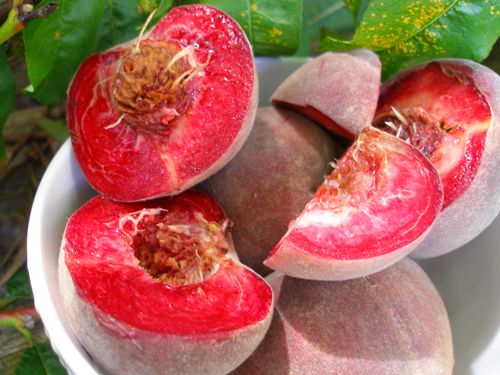 And as we bid a fond adieu to another summer (technically speaking anyway, still plenty hot around my neck of the woods), the final flurry of fruitfulness arrives on shop shelves.  Among the season’s last orders are some of its very finest, including my all-time favourite summer fruit- the Black Boy peach.

However great this fruit might be (and believe me, it is), there’s no getting away from the fact that its name is seriously off, and harks back to an earlier, and alarmingly bigoted, age. Even more cringingly, the fruit does not exist under that name anywhere else in the world; in fact it barely exists anywhere else, full stop.  The Black Boy, hereafter known as the red-fleshed peach, is (in spite of a lucrative cult following in foodie circles) very rare in cultivation.  It’s not a hybrid of a peach and plum as some have suggested (although such hybrids do exist), but a natural mutation of a white-fleshed peach, selected and propagated in France, several centuries ago. The infinitely preferable French moniker, Pêche de Vigne, translates as ‘vineyard peach’ and refers to the old French habit of growing the trees in vineyards, as pest and disease indicators.  Rosaceous plants (roses, stone fruit, pip fruit, brambles etc) are susceptible to many of the same undesirables as grapes, and are often grown alongside vines to help vintners identify problems early. Obviously the French never waste an opportunity to eat well, and made damn sure that their sacrificial trees bore the very best fruit.

How this obscure fruit made its way to New Zealand, and practically nowhere else in the world, is more of a mystery.  At my most romantic I like to attribute its arrival to the efforts of 19th century French settler to Akaroa or similar, but the truth is probably far less interesting.  Back in the golden, and regularly disastrous, days before the notion of bio-security existed, keen nurserymen could stroll off the ships with cuttings of whatever took their fancy under their arms, or a brace of monkeys on their shoulders for that matter.

The red-fleshed peach, or Black Boy if you must, is very much a substance-over-style sort of affair.  Put simply, it’s a bit of a munter. Although typically peach-shaped, the skin is of a sort of clotted mauve colour, off-set by a pelt of thick and rather gloomy greyish fuzz.  It’s really no wonder that supermarket produce buyers have shunned them so assiduously until quite recently.  However, to anyone bold enough to plough on past its ‘face for radio’ exterior, what lies beneath is just about as rewarding as fruit eating ever gets.  Dense yet burstingly tender crimson flesh gives way to indelible juiciness, and a flavour combining the finer points of plum, peach and the richest red wine.  The fragrance is heady, complex and intoxicating peachy.  I know I’m prone to throwing around hyperbole with gay abandon, but if anything I’m probably underselling this peach.

My Grandmother used to bottle Black Boys every year (taken out of context that is one disturbing line!), and a jar or two nearly always made its way up to us in Auckland.  These were treated with great reverence – the fruit being so painfully seasonal – and were carefully rationed out as an ice-cream accompaniment, or used in exquisite fruit tarts.  Given a moment alone in the kitchen I would drink the velvety, sanguine syrup straight from the jar, leaving my lips treacherously stained.  In addition to standard preserving Black Boys make a rather fabulous fruit paste too, and, if you happen to have enough peaches to justify the effort, can be squeezed and rendered down into peach nectar par excellence.  French juice and jam masters Allain Milliat produce  Pêche de Vigne nectar, and while very, very good it’s really not a patch on homemade.  This ambrosial stuff can be used to show-stopping success in Black Boy Bellini’s.  With just a drop or 2 of cassis, and a very decent measure of Prosecco or Champagne, this little number is one of the reasons I could never be a long-haul teetotaller. 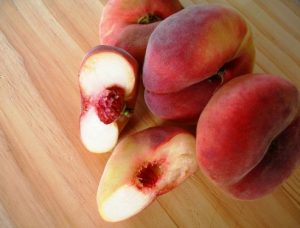 Also in the shops right now, and a nice contrast to the Black Boy, is the bizarre and beguiling Flatto peach.  This relative newcomer to the local stone-fruit scene is most notable for its seriously tacky name, and strange, seemingly mutated looks which have led some to mutter quietly about genetic modification.  In reality, China flat, Doughnut or Saturn peaches (as they are known overseas) have been cultivated for over two hundred years in China, and many decades in North America and continental Europe.  Flat peaches are almost exclusively white-fleshed, and when properly tree-ripened are juicy, luscious and wonderfully fragrant.  Unusually for peaches, they develop sweetness long before the flesh softens, meaning they can be picked, sold and eaten while still relatively hard and unripe.  This quirk of the fruit’s unique chemistry imparts an extraordinary shelf life, making it a produce manager’s dream.  Neither this apparent advantage, nor the peach’s lunch-box-friendly shape really interests me; I only care that at its best and ripest it tastes really, really good. It’s worth any amount of ire from your fruiterer to find the ripe ones via the squeeze test.

In my occasionally humble (but mostly smug) opinion, the best way with the best produce is invariably the simplest – and peaches are no exception.  Almost every restaurant in Italy features macedonia di frutti di pesca on their summer dessert menu, and it takes about one mouthful to work out why – it’s a true revelation.  Despite the Balkan suggestiveness of the name, it really just means macerated (in sugar and grappa) and/or mixed peaches.

Peel and chop equal quantities of Black boy and Flatto peaches (actually any tree-ripened peaches or nectarine will do) into eighths.  Sprinkle with a tablespoon of icing sugar and half a tablespoon of grappa or brandy per peach.  Toss together and refrigerate for at least 2 hours.  Serve with fresh cream or mascarpone, and a scattering of roughly broken crisp amaretti biscuits.  This sounds almost pedestrian, I know, but is to my mind the most respectful, nay reverential, treatment of peaches ever – apart from sun-warmed and straight off the tree.

For those with room and ambition to grown their own, Black Boy trees are available through most garden centres and nurseries from late autumn until spring.  They seem to perform better in some regions than others, but as with all peaches, should fruit at least modestly in all but the coldest parts of the country.  Flatto trees are available to the home gardeners for the first time this year from garden centres. Supplies will almost certainly be limited, so don’t mess about.

What are your favourite ways with summer stonefruit? 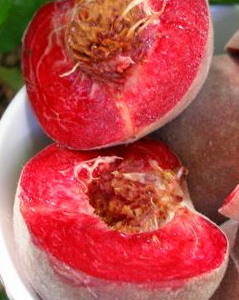 25 thoughts on “The boys are back in town”