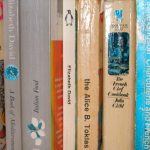 How many times have you heard it? Usually from the young and fervent, or the bored and vapid: ‘this book changed my life!’ I tend to stop listening at about that point, because what follows is usually a florid description of the latest self-help tome from the Oprah list. You know the sort of thing- three hundred pages of that very American brand of uber-politeness all to state the bleeding obvious: stop whining and pull yourself together. Not a bad title for a book actually.

So I won’t be offended if you decide to quietly back out of the room when I tell you that these books – the ones described below – really have changed my life. This is Foodlovers, so, yes, they’re all food books, and it might sound shallow and trivial when I say these titles have not just informed how I cook, but how I think about food, life and the world in general.

I don’t expect you to agree – nor do I claim that this is any kind of essential reading list. These are just the books that helped shape me into the sad little food-o-phile I am today. These books make me happy, hopeful and hungry.

I was a weird kid by kiwi standards. I didn’t like sports, my wardrobe was heavily influenced by my mother’s hippie-dippy sensibilities (I thought nothing of going to school in cow-skin moccasins, gold silk jeans and a red velveteen sweater), I was forever chasing butterflies – literally – and my idea of recreational bliss was an afternoon spent baking.

The first book that really opened my eyes to flour, butter and a nice hot oven, the one that taught me that the kitchen wasn’t a scary place at all, was Edmonds. Every Friday after school (once Ollie Olsen had signed off) was baking time, and slowly but surely I worked my way through each and every recipe – several times.  Of course, I still needed my mother’s hands-on instruction to learn what was involved in creaming butter, folding-in flour and bringing egg whites to stiff peaks (that was assumed knowledge in even the most basic cook books back then), but otherwise it was all straight forward and easy to follow stuff, even as a total kitchen virgin.

Another of my childhood abnormalities was a precocious fondness for flower gardening. Oh, how I longed to visit the Edmonds factory with its garish, twee plantings out-front, but my dreams were dashed, unrealised, when a developer knocked it down back in 1990.

I’m not mad on the updated, slightly la-de dah new version of Edmonds, which features all manner of supposedly modern recipes involving pesto, hummus and other things done better elsewhere. I think I’ll just stick with the copy I learned to bake from – complete with oil stains and a liberal dusting of flour – if you don’t mind.

My first copy of this, perhaps my favourite food book of all time, was a rather dog-eared 1960’s edition with charmingly kitsch cover art. I was in my late teens before I found it, long-forgotten at the back of a wardrobe, but was instantly hooked. It taught me that la cucina Italiana is a whole lot more than the ‘spaghetti and sauce’ idea I had in my head, and that glossy photos aren’t necessarily the measure of a good cook book. Save for a few line drawings, Italian Food is all text, cover to cover. Instead, the emphasis here is on the quality of the writing and the authenticity and reliability of the recipes.  Although published in 1954, Italian Food is still, in my opinion, the greatest English-language book on the subject ever written – and I’ve read more than I care to recall. Unusually for the time, Elizabeth David writes with a deep respect for the Italian people and their cuisine: patronising pomposity was the usual tone in those days.  Her work here is at times laugh-out-loud funny, but unerringly intelligent throughout. I remember being shocked to the very core of my know-it-all teenage being to find recipes for such modern and fashionable delights as pesto, saltimbocca and gelato, in a book that was nearly as old and moth-eaten as my parents.

There is natural progression from Elizabeth David to Jane Grigson. The two often referenced each other in their work, and both had a similarly authoritative, waspish tone and reverence for their subject matter. French Charcuterie and Pork Cookery was the book that first demystified the murky, frankly frightening world of charcuterie for me, and thereby triggered one of my most enduring food passions – home-cured meats.

Again, this book highlighted that all food fashions are really just revivals, featuring as it does recipes for Spanish style hams, pork rillettes, potently seasoned suacisson, and many other a la mode meaty pleasures. This book, more than any other, taught me to be brave in the kitchen, to take risks for good food – after all, the difference between a good ham and a bout of botulism is only a few grams of salt. I can think of no greater virtue for a food book.

This was the first book I found which successfully brought together my biggest extracurricular obsessions – growing good produce and cooking great food. Sure, there are plenty of other books for cooks who garden and gardeners who cook, but most seem to be either soulless affairs aimed at trainspotter types, or overly obsessed with pulses and respect for the Earth Mother. Maggie’s Farm is definitely a food book first and foremost, but it’s written with not just a cook’s love of good food, but a farmer’s love of the land.  And although written from a decidedly Australian perspective, with a good measure of German-influenced Barossa cooking, I found a lot of familiarity here. The seasons were around the right way for one thing, so it didn’t make me feel excluded from the cool clique in the way northern hemisphere cook books sometimes do. And apart from just extolling the pleasures of cultivated food, Maggie’s Farm also delves into foraged food, another pet passion of mine. Using Maggie Beer’s instructions I even collected, purged and eventually poached a pot full of fat garden snails (which taught me I do not like poached snails). Forget A Year in Provence: this is the book to make you long for the lifestyle block idyll.

In the 1980s this series of books was everywhere. The glossy, magazine-style publication presents mouth-watering, accessible Chinese cooking in an idiot-proof format, and with competent but unintimidating photography. Admittedly many of the recipes are rather tame by today’s standards, but when I was growing up this book was like training wheels for Chinese cooking to me. Mum worked nights throughout my teens, so I had plenty of time to experiment with its many excellent, mostly Cantonese, dishes. While my friends and their families were presumably supping on stew and packet-mix macaroni-cheese, I was home alone, gorging myself on homemade crispy-skin chicken. Those were the days.

The Chicken with Lychee recipe from the Chinese Cooking Class Cookbook is still a much loved part of my family’s food repertoire, and the deep fried toffee apples… oh my God the deep fried toffee apples! This book looks a little sad and dated now, but I’m yet to find a more clearly laid-out beginners guide. Not only are the instructions simple and reliable (with step-by-step photographs), but the dishes taste great too.

Although actually a serious of small books, I tend to think of these as one title, and it’s a shame they haven’t been released that way. I have a lot of time for Antonio Carluccio; he writes so lovingly of his native Italy, but with none of the patrician haughtiness of writers such as Lorenza de Medici. The phrase ‘salt of the earth’ comes to mind. This might just be the carefully crafted public persona of a shrewd businessman (which he surely is), but I’ll buy it.

Rather than just regurgitating clichés of Italian food, these books present reliable recipes for the sorts of dishes you might find in a small village trattoria, including tofeja del canavese (pork and beans), insalata di neonata (salad of baby anchovies),  fichi al forno (baked figs) and many more.

And certainly, there are  many other food books I have loved and learned from in various ways, but so far only this modest selection have actually changed my point of view. I hope this list will grow.

So have you too been moved by a cook book? Has Delia rocked your world or has Julia shown you the light?

Bake Me A Pie! 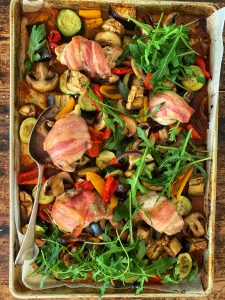