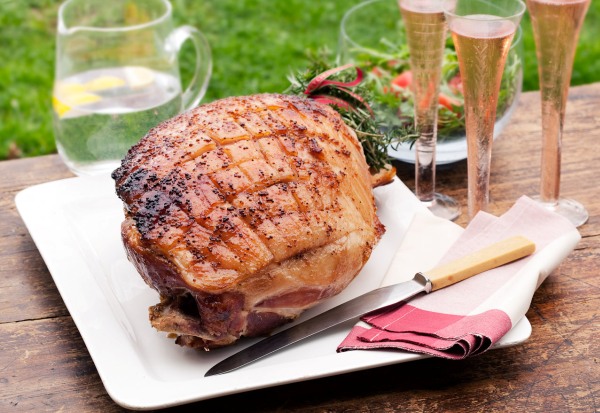 Preheat the oven to 180 C. Remove the ham from all packaging and using a sharp knife make a zig zag pattern in the ham skin where the shank (narrow end) joins the ham leg.  Be careful not to cut into the white fat, the aim is just to cut through the skin.
With the shank towards you, lean over the ham and gently use your thumbs to loosen the skin of the ham away from the fat layer across the rounded end of the ham, (ie the opposite end to the shank)  carefully ease the skin off, trying not to disturb the layer of fat.
Once the skin is removed then score the fat by marking lines with a sharp fine blade knife, horizontally and vertically across the ham to make diamond patterns. Take care not to cut below the fat layer and into the meat
Place the jam, orange juice and mustard in a small saucepan and stir over a gentle heat just until the jam starts to melt.

Sit the ham in a large roasting dish, spread the glaze evenly over the ham.  Any excess can be used to baste during cooking.  Pour 1 cup of water into the ham or you could use orange juice if you prefer.  This essentially is to stop the glaze burning as it drips off.
Cook  for 30-45 minutes until the ham is a rich golden colour,  basting with extra glaze  several times during this time.   You may need to turn the ham around during cooking if one side colours too quickly.

Serve the  ham warm or at room temperature.

Left over ham can be covered with a clean, damp tea towel and stored in the fridge for 1 week.  Change the tea towel daily.

Glazed Chicken with Garlic and Ginger