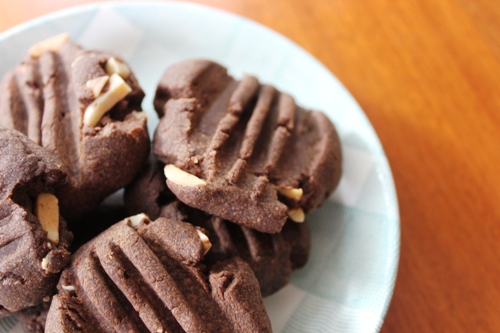 I’ve said it before I’m sure, but I don’t like substitutions. Not in cooking or in any other aspect of my life. When I was a child back in the now distant 80s, dietary substitutions were all the rage, from nut-meat patties (thank YOU very much Linda McCartney), to chicory coffee and of course carob, our supposed savior from the tyranny of chocolate.

You see, for a time theobromine (an active ingredient in cocoa) was considered a great and terrible corrupter of young bodies, a harbinger of bad behaviour and haughty headaches. Chocolate was something to be avoided at all costs, or at the very least concealed until the kids were in bed. Even my own level-headed mother fell prey to this nonsense for a spell, and inflicted me with carob bars, carob drinks and carob cakes at every opportunity. Even then I knew it was nowt but airy fairy nonsense and resented it all deeply- more so because I knew she had a stash of the real McCoy in her dresser draw.  Fortunately common sense eventually prevailed, and real chocolate re-entered my life.

The sad result of all this was that I never really trusted carob again. It was forever tainted by the patchouli and kaftan aesthetic of new age ‘wisdom’. But it’s funny how the years soften one’s views. When I stumbled upon some fruiting carob trees just up the road recently, the fragrance of the pods immediately and very fondly took me back to my childhood.

Our enjoyment of food is strongly affected by how it is presented to us. When you’re force-fed carob as a cocoa or chocolate substitute it’s deeply disappointing stuff.  It really doesn’t taste like chocolate at all- well not much anyway. But if you approach it as an ingredient or foodstuff in its own right, there is much to like. The flavour is strong and complex, with hints of coffee, molasses, honey and yes chocolate, but only very vaguely. More than anything, carob tastes like carob, and that is no bad thing at all.

The idea of using carob in place of cocoa is a recent conceit. Humans have been cooking with and consuming naturally sweet raw carob pods for thousands upon thousands of years, far longer than we’ve had access to cacao trees, let alone the knowledge of how to process their seeds into something palatable. If anything, cocoa should be seen as a carob substitute.

Although carob is available in various processed forms, it was carob powder that stood in for cocoa in many a liberal households during the 70s and 80s. Composed of nothing more than dried and ground carob pods, the powder resembles, and for the most part behaves, like cocoa – except that it’s naturally sweet and has a tendency to thicken liquids if overworked. A good way to get a proper feel for the flavour, fragrance and general demeanour of carob powder is to dissolve a few teaspoons full  in a cup of hot milk. Not a bad drink at all and a fine entrée to the charms of the pod.

One of the few carob products I actually liked as child was the carob and peanut shortbread made by Kohi cookies. These were very popular and widely available for many years and will probably ring bells with fellow Kiwi Gen-Xers. To my disappointment though, when first flushed with newfound carob fervour, I learned that these quietly fell out of production some years back. So naturally I decided to make my own. These were based purely on memory, and I used slivered almonds in place of peanuts. I don’t care much for peanuts.

According to my memory  these are a very close approximate to the Kohi biscuits of old. Although they look quite a bit like chocolate cookies, this is mere coincidence. They do not, and should not, taste of anything other than lovely, ancient carob. And quite a lot of butter. Enjoy.

Cream butter and sugar until very smooth and fluffy. It should almost resemble whipped cream.

Sift together the flour, carob and salt. Combine with the butter and almonds until a stiff, evenly coloured dough is formed.

Cover and refrigerate for 30 minutes

Shape into small balls and place on a clean baking tray about 2 finger breadths apart.

Flatten with a fork.

Bake for around 20 – 25 minutes. Allow to cool completely before serving.

Note: Although once so mainstream and common that it was stocked by supermarkets and dairies nationwide, carob powder is now something of a rarity. I eventually found some under the very reliable Ceres brand at a whole-food shop, but it took a while. I’ve since learned that it’s conveniently available here, from our good friends the Summerfields at their Edible Planet website.