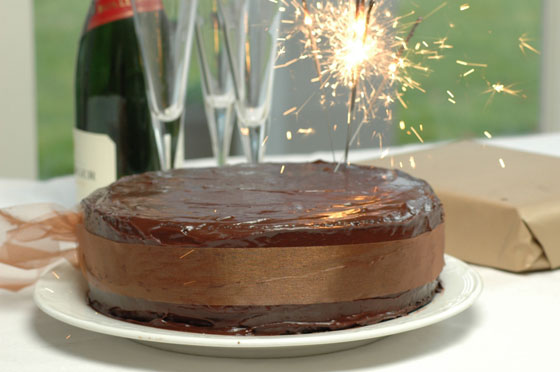 Chocolate. Cake.  Two words with such a natural affinity for each other, they almost roll of the tongue as one.  Though there are many, many different types of cake in the world, in the end there is really only chocolate cake.  In the presence of a perfect slice, the rest of the world simply fades away. It’s the cake we always come back to after dalliances with sponge  and flings with flans.  It’s the cake we always aspire to perfect, yet its perfection is akin to chasing nirvana- always just out of reach.  But with a deft touch, the very best ingredients and a trusty recipe, one can come perilously close.  In the words of some play-write guy from back in the day, ‘ah me!’

In the great taxonomy of baking, chocolate cake is a genus, rather than a species.  That is to say that it is the descriptor of a vast family of cakes, the individual species of which are many and varied. (Does it show I have background in biology?)

After the ‘discovery’ of cocoa by the Spanish (meaning they stole it from the Aztecs shortly before eradicating them), it was inevitable that it would end up as a fashionable novelty in the grand salons of Europe.  The long-held attitude of moneyed society at the time was, ‘if it’s valuable and edible, put it in a cake’, a somewhat arch means of flaunting one’s wealth.  Every rare exotic spice (pepper, cloves, nutmeg, and mace  to name but a few) to arrive on the European market ended up in a courtesan’s cupcake sooner or later.  In sixteenth and seventeenth century Europe anything from the Americas was considered the last word in chic. Chocolate was an overnight sensation.

The oldest record of anything resembling a chocolate cake dates back to the mid 1600’s. These early efforts were simply rich sponge cakes, thickly lathered with a chocolate based icing, very similar to a ganache.  These prototype chocolate icings eventually paved the way for the development of eating- chocolate i.e. bars and bonbons.  This makes me feel vindicated in my belief that icing is a legitimate snack food.

Although seventeenth-century bakers experimented with adding pure chocolate to cake batter, yielding rich and heavy results, the modern spongy, cocoa-based chocolate cake did not appear until sometime after 1828. This was the year Dutch man Conrad Van Houten  revolutionised the chocolate business and changed the world, by developing a method of removing the fat from cocoa mass.  The resulting new product, cocoa powder, led to the myriad chocolate cakes, breads, slices available today.

There is certainly no lack of recipes available to the modern chocolate cake fancier. For example, at the time of publication Google returns a staggering 12,300,000 results for “chocolate cake recipes”. That’s quite a bit more than a small army of bakers could render in a life time, and enough web content to crash the Xtra servers and send my laptop into meltdown. But, luckily for you, we here at Foodlovers have done all the searching for you, and come up with a refined list of tried and tested ‘best of list’  .

When it comes to chocolate cake, most of us are traditionalists first and foremost. This recipe is a perennial classic at Foodlovers   and with listeners to Helen’s show on Radio Live. It’s an excellent  basic recipe that delivers the goods and pleases the punters.

At the other end of the spectrum – and probably my all time favourite – is this flourless chocolate cake.  It’s about as unctuously rich as any chocolate cake gets and occupies that tenuous territory between bitter and sweet. This cake just oozes sexy sophistication- and chocolate.  If, like mine, your palate runs to kinkier places on occasion, a little ground chilli blended into the batter can make for all kinds of fun.

This Decadent chocolate cake is a good middle ground between the hard-core lusciousness of Flourless and the lighter, more traditional versions.  It’s a fine recipe and lives up to its name.

I’ve never been mad on banana cakes. They always strike me as a means to an end , sort of waste disposal cooking.  However, I have no such concerns about this unusually good banana chocolate cake  .  The two dominant flavours of banana and chocolate are perfect partners, and the inclusion of the fruit allows you to at least pretend that it’s sort of healthy.

In a similar but rather more quirky theme is this Beetroot chocolate cake . You may well cock your eyebrow, but it really does work. The beetroot contributes an earthiness which enhances the chocolate flavour and is not in the least bit reminiscent of borsht.

And although you will not often catch me advocating microwave cookery (an oxymoron by my reckoning), all of us can be caught unawares by visitors on occasion and feel compelled to throw together a cake.  This Microwave chocolate cake is hassle free and superfast – not to mention bloody delicious.

Serve chocolate cakes with tart berry coulis or fresh cherries, and  whipped cream; but never with anything cloying sweet.  Yoghurt might play nicely with other, lesser cakes, but it has no business consorting with chocolate.

Irrespective of which recipe you choose, a chocolate cake – in fact any cake – is only as good as its basic ingredients.  If a recipe asks for chocolate, use the best bittersweet you can afford.  Lindt, Green and Blacks and Caffarel are all excellent.  But of even greater importance is the quality of the cocoa you use.  It may seem extravagant and a tad pretentious to advocate baking with brands such as Valrhona and Van Houetn but they really do make for a better tasting, better smelling and better looking result.  Never, ever substitute margarine or oil for real butter, always use fresh eggs- preferably free-range, and remember that a pinch of salt enhances the flavour of any chocolate dish.

Chocolate cake is essentially a luxury food and the sum total of various luxurious parts. Why bother if you’re going to cut corners?

One thought on “Let them eat (chocolate) cake”