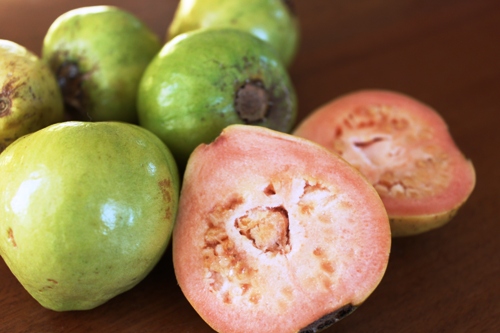 To most New Zealanders, a guava is a small red fruit, used almost exclusively for making jellies and jams. With the exception of a few morbidly obese and pathologically indiscriminate Kereru, nobody really eats them because they’re gritty, sharp and according to many, smell of cat pee. I don’t actually agree with that last bit. I rather like the smell, which may say more about me than it does about the finer points of fruit fragrance but it’s true that over all they’re not very versatile.

It’s a good thing then that there is more to the guava family than this species – the so called strawberry guava (Psidium littorale ). In fact they only barely count as guavas at all. The real or ‘common’ guava (Psidium guajava), so beloved in the tropic and the base for all those deliciously musky guava fruit drinks is a very different beast –or plant as it- were altogether.

The fruit of true or ‘tropical’ guava range can be larger than an apple (but are most often quite a bit smaller), have shiny green, yellow or rose blushed skin and either baby-pink or pearly white flesh. They pack an intensely musky, resinous fragrance and sour-sweet taste, with a granular, pear-like texture.

Although often described as a tropical fruit, the trees grow quite happily in warm temperate climates too. Here in New Zealand they are becoming an increasingly common site at farmers markets and the better fruit shops during the winter months and are gaining in popularity as backyard fruit tree. Probably the only thing holding them back from widespread commercial success is consumer ignorance and confusion with the aforementioned  strawberry guava.

In tropical Asia guava are most often peeled, deseeded and dipped in a bracing blend of salt, sugar and chilli. The contrasting flavours and sensations work together on so many levels and it’s one of the only ways guavas are ever eaten fresh. The guava is a very fine fruit- perhaps one of the finest, but it’s hardly a pick it and go affair.

As a dessert fruit they are easily on par with peaches and pears and are similarly well suited to poaching. To poach1 kilo of fresh guavas, make light syrup with 1 cup sugar and 3 cups water. Bring to boil and add the halved fruit. Simmer for no more than 5 minutes. Leave to cool, then remove and discard the gritty seeds.  Serve chilled alone or with other poached fruit, with ice cream or made into a crumble using ginger nuts and toasted coconut in the crust.

Alternatively, guavas make an excellent fruit paste for serving with cheese.  Use this quince paste recipe with the guavas in place of the quince.

Guavas are not really sweet or juicy enough for conventional juicing but are commonly used to make delectable fruit nectars. Nectars are sweetened and often quite thick fruit drinks, rather like a hybrid of a smoothy and a cordial. They are generally made with a puree of lightly cooked fruit, citric or ascorbic acid and sugar, ensuring long term shelf life if sealed.

The following recipe will produce something very similar to off the shelf guava nectar (but containing far more real fruit) and can successfully and rather deliciously be applied to strawberry guavas, feijoas, apricots and peaches. This nectar is naturally quite thick  because the very high pectin levels of guava. This quality also makes guavas idiot proof candidates for jam and jelly making!

I kilo guavas -fresh OR canned.  (or other fruit see above)

Halve and poach guavas as described above, but do not discard seeds or syrup.

Using a spoon, force the fruit through a sieve and back into the syrup. Keeping working at it until all that remains in the sieve are seeds and a little fibre.

Discard the seeds etc and return the syrup and fruit pulp to the boil along with the citric acid, salt and 700mls water. Boil for 2-3 minutes and remove from heat. Over cooking will result in a jammy flavour.

Bottle and store in a cool place. Serve well chilled. Refrigerate once opened.

Just about the most refreshing drink I know and one of the sexiest too!

Tropical guava trees are available from garden centres in the North Island, but these are usually of the same rather average South African kind i.e. small, seedy fruit with low sugar levels. Subtropica and Russell Fransham nurseries offer a good range of superior tropical guava varieties and both happily courier plants nationwide.