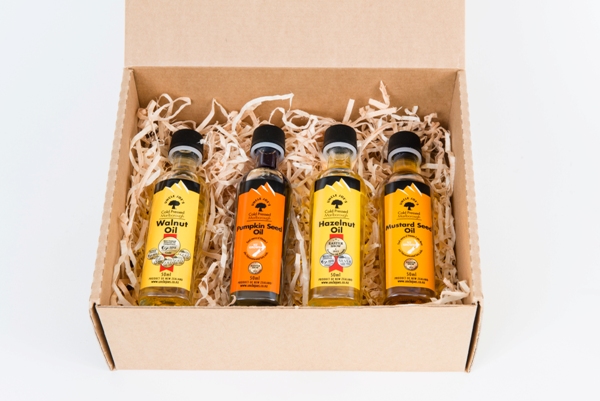 Malcolm & Jenny Horwell are the co-owners of Uncle Joe’s award winning Walnut and Hazelnut products. They have owned Uncle Joe’s since 1997 when they purchased the small entity previously based in Nelson. They produce Uncle Joe’s premium nut & seed oils which are all cold pressed, plus delicious nut spreads and kernels. Uncle Joe’s oils have been winning Gold awards both overseas and locally at Gourmet Oil Competitions since 2007.

More background on Uncle Joe’s: With growing sales and distribution Jenny & Malcolm decided to diversify and expand into growing and selling hazelnuts. They decided to plant a small grove of nut trees & because their  property lies adjacent to other small holdings, they chose to plant hazelnuts, a smaller tree as opposed to potentially much larger walnut trees. They planted their first paddock in a variety commonly grown in NZ called Whiteheart and in the following two years planted a table nut variety called Ennis.

Uncle Joe’s now has a small producing orchard of around three and a half acres planted with ten to twelve year  old hazelnut trees. Added to this supply are hazelnuts from other orchardists as well as walnut crops from local tree owners. A fully mechanized production process has been developed, making careful choices of equipment to minimize possible damage to the kernels and protection from oxidising. Above all the focus is on ensuring customers are delivered premium quality kernels & oils.

Uncle Joe’s Award Winning Mustard Seed Oil: is used in dressings & sauces worldwide; can be used for seasoning or frying (smoke point 254 deg C). Mustard Seed Oil is a rich source of Omega 3 and Vitamin E (known for protecting the heart) for cooking use a little for flavour, enjoy with watercress or steamed greens, fish, bread or pasta.

Past Ellerslie gold medal winners design gardens for the future