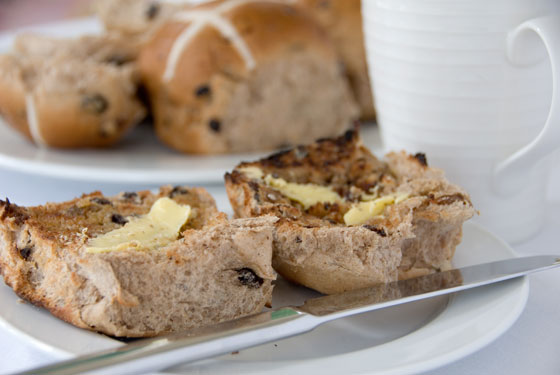 Avowed atheist I may be, but I can’t fault Christianity’s influence on baked goods. Some of the finest examples of the bakers’ art including Panetonne, Pandoro, Colomba, and of course  Hot Cross Buns have their origins in Christian ceremony and celebration.

Hot Cross Buns are a most uniquely British bread of devotion, made to commemorate and honour Christ’s time on the cross. Well sort of. Originally the buns were probably made in honour of the pagan fertility/moon goddess Eostre. The cross represented the four phases of the moon and the addition of fruit, eggs and honey represented fertility and plenty. Eostre was worshipped all across Europe in pre-Christian times, and similarly opulent breads were made in her honour all over.

When Christianity started looking for converts it was found that you could ban a lot of the things near and dear to recently renounced pagans, such as nudity, human sacrifice and the gratuitous use of woad, but you couldn’t take away their party food. So many a heathen hearth cake was rededicated to God – as opposed to gods.

And the Hot Cross Bun was ripe for appropriation. It was already branded with the company logo, after all. Hundreds of years later, during the reign of Elizabeth the first, the crosses – but not the buns – were abolished as an emblem of lethally unpopular Catholicism. That they were often made by bakeries that had formerly turned out communion wafers didn’t help matters.  Any baker who persisted with the crosses was likely to end up on sedition charges, which was effectively a trial without jury death sentence. Eventually Elizabeth relaxed her anti-papal policies (mostly because she’d rooted out and killed the entire remnant clergy), and decreed that the buns -cross and all could be made, but during the High Holiday only. Incidentally, for tips on making the perfect cross, click here.

Today, even in devout circles, the Hot Cross Bun has little spiritual significance. It’s just a delicious, enriched bread that we eat around April, as we have for thousands of years.

When I was small my mother –a fair-weather protestant I might add- bashed out batches of Hot Cross Buns every year.  The warm, heady scent of yeast and mixed spice would fill the house as the dough, torturously slow, climbed over the edges of her beat-up old enamel mixing bowl. By the time the buns went into the oven we were all half crazed with greedy anticipation, and would tear into them the moment they emerged.

Mum prefers to order her ‘Hotties’ from a local deli these days, but I still try to carry the family torch, alternating between her recipe (passed down by Evetts women for generations) and whatever new renditions I’ve found during the course of the year. But to be honest apart from  baking times and minor differences to method, Hot Cross Buns tend to be much of a muchness – and so they should be. Messing around with memory-studded food icons invariably leads to disappointment. Look at what happened when Griffins started using real vanilla essence in  Girl Guide Biscuits. They might technically taste better, but they don’t taste right…

So it’s imperative – to me at least – that Hot Cross Buns taste just like the template in my mind’s eye  (or tongue, as the case may be). They should be richly browned, with an even, creamy white cross, and sticky with glaze. Inside the bread should be semi-sweet and slightly chewy, with  warm, peppery notes from the spices (cinnamon, cloves, nutmeg and sometimes allspice), and explosive punctuation from the  currants and candied peel.  Quality of ingredients matters more than the method, more than anything really, so always use freshly bought spices (from a trusted supplier), high grade flour and the most succulent dried fruit you can find.

How you eat the buns once they’re out of the oven is rarely quibbled over either. Split them, toast them and plaster with butter. Never margarine and certainly not olive oil.  But just between you and me, I’m more than partial to a lick of marmite.

For Foodlovers’ traditional and rather fine Hot Cross Bun recipe click here, or read on for a version by Sean Armstrong, Director of Loaf Handcrafted Breads

When mixed remove the dough from the bowl and place on a lightly floured bench. Scale the dough into 120g pieces then round into tight balls. Place on a lightly greased pan with high sides, leaving a gap about half the size of each bun between them on the tray.  Cover loosely with cling film and place in a warm place, allowing them to double in size.

Pre-heat your oven to 200 degrees on fan bake.

Mix the crossing mix ingredients together. Once the buns have doubled in size, use a piping bag to cross the tops of the buns with the crossing mix and place in your pre-heated oven. Drop the temperature to 180 degrees and bake for 18-22 minutes or till golden brown.

Remove from oven and serve hot with salted butter.