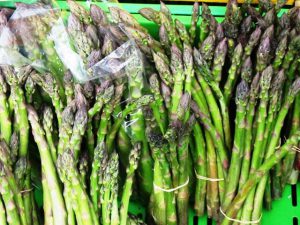 I’m one of those people who sulks and pouts their way through the dark months. I loathe the short days, cold nights and the lack of vital produce, and so desperately wait for the first tell-tale signs of spring. Buds on fruit trees, love songs from black birds and all associated optimism all help lift my spirits, but nothing quite says spring to me like the arrival of the first asparagus.

Not only does the arrival of asparagus do wonders for my serotonin levels, but it’s also one of my favourite vegetables taste-wise, and the first one I remember really enjoying as a child. But then I suppose I wasn’t exactly a normal child.

Asparagus is a bushy deciduous plant native to Europe and Asia, and is often mistakenly described as a fern on account of its frond-like feathery growth. The parts we eat are the very young shoots which start to appear in early spring and carry on up until midsummer. Although the asparagus season is quite long, with different varieties successively coming online, the very best asparagus is found in spring, when the shoot are still pencil-thin, sugary sweet and full of that uniquely asparagus flavour. But beware of thick, tree-trunk like asparagus: although it may look to be bursting with verve and crunch, it is often woody and lacking in flavour. A lot of this stuff turns up late in the season quite cheaply when the wholesalers are trying to move the tail end of the crop.

I always celebrate the annual arrival of asparagus by making a creamy, delicate asparagus risotto. This is the perfect dish for marking the end of winter, with its gentle herbaceous flavour and the delicate crunch of the barely cooked young shoots. At the most I garnish it with crispy twist of sautéed prosciutto and sprinkle of wine.

My earliest memories of asparagus stem from return trips to wellington aboard the Silver Fern. This was in the final days of rail being a viable, or even possible, way of getting about the country. It’s a bloody long journey by slow train, but a breathlessly exciting experience for a small boy from the city, punctuated by stops at obscure main trunk towns, and the periodic arrival of the complimentary refreshments trolley. Along with the gallons of tea (still served in those charming Crown Lynn cups), ANZAC biscuits and mini-mince pies that were handed out along the way, were old fashioned uber-kitsch (even in the early 80’s) asparagus rolls. Made with tinned asparagus and pappy white bread (crusts removed, naturally), these were an icon of the New Zealand tearoom scene from the 1950’s. NZ Railways never really escaped the 1950’s, and if they hadn’t been sold for a song some year back, I’m sure they’d still be dishing up the very same food and curt service today.

Although not remotely comparable to its fresh counterpart, tinned asparagus is not without its charms. Due to being cooked at very high temperatures, it has a silky (a less charitable person might say slimy) texture, and sweet, earthy, almost nutty flavour. Although I normally cross the road to avoid food like this, I have an inexplicable fondness for tinned asparagus. Call it nostalgic masochism if you will.

As summer rolls along I briefly come over all alpha-male, fire up the BBQ and, among other things charred and smouldering, indulge in good deal of BBQ asparagus. I make a marinade of 2 parts dark soy sauce, 1 part peanut oil, 1 part chilli oil and a little brown sugar. I liberally brush this over the grilling asparagus until slightly shrivelled, embarrassingly limp and utterly delicious. Serve this with whatever else you happen to be burning at the time.

Thinly sliced raw asparagus makes a beautifully crunchy and clean tasting addition to spring salads, and all on its own-some makes exquisite crudités for dipping in freshly made balsamic vinaigrette. I ignored this idea for years, thinking it to be more of that boring sort nonsense health-freaks like to pretend is tasty. I was a rash fool – its child’s-play simple but disarmingly delicious.

My grandmother was a woman of generous proportions (if not disposition), which was due in part, methinks, to her firm belief that butter was a condiment. Most of her cooking was ‘seasoned’ with salt, pepper and a liberal dousing of butter. She had particular fondness for steamed asparagus, swimming in a golden slick of perfect, molten butter. This remains one of my favourite ways of enjoying both asparagus and butter. While I may not have quite the same disregard from my arteries and girth as my late Nanna, she did have a point about butter. It’s the perfect embellishment to the very best produce.

Asparagus has a natural affinity for eggs. Steamed asparagus, served with quivering poached eggs and richly silken hollandaise, is a brunch of the most regal proportions. Back in the 80’s when complimentary vegetable sides were still the norm in Auckland restaurants, asparagus with Hollandaise or vinaigrette was a very popular choice. Having grown up in the restaurant industry, I still baulk at having to pay extra for a side salad or plate of steamed greens: labour costs be damned.

The two main colour varieties of asparagus seen in New Zealand are green and purple, but in terms of taste they are much of muchness. However, in Europe white or blanched asparagus is a popular and pricey seasonal treat. This is produced by keeping the emerging asparagus shoots in complete darkness, and thus preventing chlorophyll from developing. It’s a carefully tended crop, is picked by hand and must be kept in darkness right up until the point of sale. So it’s no surprise that it costs many times more than regular asparagus. White asparagus is produced on very small scale in New Zealand, but is almost exclusively destined for the off-season export market. It has a very sweet, mild flavour, and should be dressed with nothing more than a little extra virgin olive oil or butter. If you’re lucky enough to find some, snap it up quick smart.

The one black mark against the otherwise saintly status of asparagus is the rather antisocial affect it has upon certain bodily functions. More to the point, it makes your wee smell nasty. Noxious and obnoxious though it may be, this odour is a harmless side-effect of various sulphur compounds present in asparagus being broken down. It’s nowhere near as disturbing the post-digestive affects of too much beetroot: beetroot pigment passes through the personal plumbing unchanged and ominously sanguine, thus creating the alarming impression that you are haemorrhaging like a Romanov with a paper cut.

Asparagus crowns (dormant root clumps) are available from garden centre during the winter if you care to grow your own. They are not difficult plants to grow, and the feathery summer growth and golden autumn finale is very ornamental. But in most backyard situations, it’s not all that practical or even possible to grow enough asparagus to make it worthwhile. The plants take up a lot of room, need a permanent bed, and only produce edible shoots for a few months each year. But those of you in the provinces, with backyard space to burn should definitely lay down a bed. When it comes to asparagus, fresh really is best.

So for me, the appeal of asparagus lies not only in its exquisite taste and texture, but also because it signifies the end of the monotony of winter and the return the warmth and vitality that is spring.

What are your favourite ways with asparagus?

Spring in the Kitchen