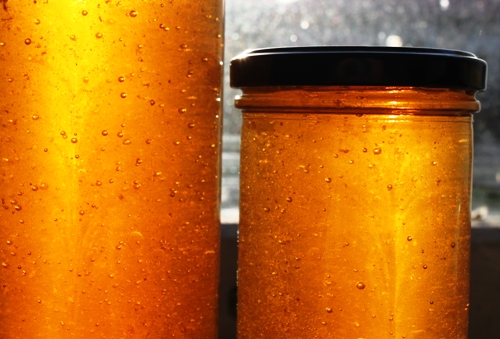 This week, after many months of quiet anticipation, I reaped the first luscious rewards of my life as an urban beekeeper – a staggering 10 litres of perfect golden honey. And I’m told this is a very modest haul…  Now,  I always get a child-like thrill out of producing food “from the land,” but this one seriously took the cake (and will probably end up in more than few). Pure smug, exuberant delight.  My current Facebook status is all about the honey, and I’ve been dishing it out by the jarful to friends, neighbours and anyone else that knocks on the door. Frankly, I think I’ve earned the right to skite. But, now, with a filled to the brim bucket full of honey staring at me from the bench, and the likelihood of three or four more before Autumn, I’m starting feel a bit daunted. What does one do with untold litres of honey, albeit gorgeous and unpasteurised?

It’s apparently been a bit of funny season for bees in Auckland – everything’s happening early:  early nectar flow (when nectar-rich flowers start to bloom en mass); early swarming (my hive did this last week, to quite spectacular effect); and very early honey capping (when the comb is full of ‘ripe’  honey which had been sealed under wax). So at the urging of my brilliant bee guru, I harvested one full box (or ‘super’) containing eight frames of said fully loaded honey comb. Let me repeat that for you -just one box,  from one hive gave me 10 litres of honey. Incredible returns, and at this rate by season’s end the bees will have (theoretically) paid for my initial outlay. I say theoretically because I cannot legally sell my honey unless I extract and bottle it in a commercial kitchen. To get around this red-tape and avoid the wrath of the council (whoever that may now be),I  plan to hire a rugby club kitchen or similar then try selling my Devonport honey to well-healed locals and tourists at our weekend market, and wholesale to restaurateurs.  The process of extraction is pretty simple thanks to my lovely Italian honey extractor (basically a hand-cranked centrifuge – thank you Trademe).  After that it’s just a matter of pouring the honey through a sieve and bottling it. By my reckoning I can still turn a profit after hiring the kitchen and various bee-related expenses throughout the year. Truth be known it’s rather a vague and hopeful business plan, but you never know… 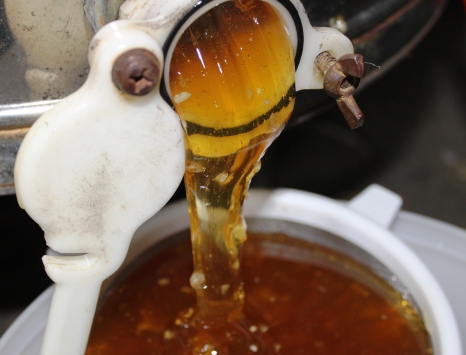 In the meantime I have this year’s already sizeable honey haul to contend with.  As a family we’ve decided on homemade Christmas presents this year (except for Baby Olive -she shall be lavished with love and gorgeous things), and I think beautifully packaged home-grown honey falls into that category. I’ll find some pretty glass jars and write up nice little labels, extolling the merits of local, unpasteurised honey. For example did you know that honey from your neighbourhood helps to reduce the symptoms of pollen allergies? Honey contains traces of pollen from all flower types visited by the hive, which when ingested helps to desensitise your immune system. Doesn’t work with pine pollen sadly, which is the bane of my existence every spring – unfortunately conifers are entirely and quite prolifically wind pollinated.

As a very keen home wine maker and distiller I’m seriously looking forward to making my own mead.  This ancient elixir drunk by the Vikings, ancient Britons and many other dating back as far as 8000 years,  is not only delicious, but is apparently loaded with health-promoting qualities. From mead stems the further and even more exciting possibilities of mead brandy, which probably promotes various liver shrivelling qualities, but imagine the flavour!

But that’s all for later in the season. First of all I need to find ways to introduce honey to a lot more of my cooking. When I think of it there are few situations where I regularly use honey in savoury dishes (largely, methinks because most food stops being savoury when you douse it in honey).  I always use honey in Chinese-inspired marinades for meats, in teriyaki sauces, when smoking fish, in certain vegetable soups (most notably pumpkin, kumara and/or carrot), and of course with mustard. Not exactly a recipe I know, but honey with oozing and fizzy blue cheese is pretty fabulous too.  But that, dear reader, is probably about it.

When it comes to desserts and baking the possibilities and the breadth of my repertoire are wider. I make both panforte and panpepato with honey, as well as honey gelato, torrone, baklava (when I can be bothered with filo pastry), various things called “honey cake,” and that terribly outmoded, but defiantly delicious, honey and rice bubble slice.

Beyond that I’m really scraping the bottom of the inspiration cauldron. So, beloved Foodlovers family, I need your help. Inspire me. Excite me.

How would you use 10 litres of honey? Recipe, links and smart comments welcome

A pig in a poke: Things you didn’t know about food.

The boys are back in town