Home » A pig in a poke: Things you didn’t know about food. 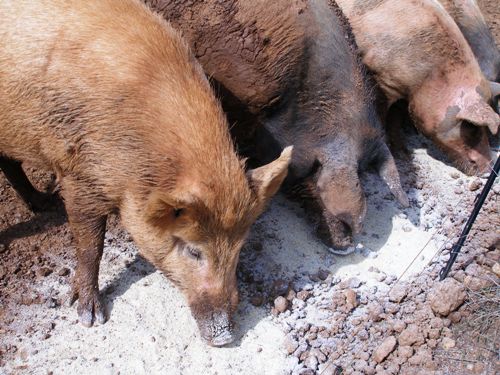 I’ve always been fond of useless information- especially if it’s in anyway food related.  In my previous life as a museum educator, such miscellany was an essential tool of the trade. Compelling little bytes of knowledge that could be regurgitated into the minds of passing strangers. But more about regurgitation shortly.

So I thought I’d use my column this week as bit of an outlet for some of my favourite food-related nuggets of absurdity  before they are overlaid in my head with useful things, like ‘never shake a baby, never’.

But hopefully this is just the beginning, because I’m challenging you dear, dear reader to get into the spirits of things and help us to create a definitive list of useless of food facts by adding your own little gems below. The stranger the better.

Lovely stuff and far older than people; but did you know that this most luscious of sweeteners is in fact 100% bee puke? ‘Fraid so.  And worse still the little beggars aren’t content to simply vomit in a corner and leave well alone.  Immediately post evacuation another bee, with the specific and rather dubious  task of ‘vomit chewing’ gives it a jolly good mastication, until the mess in her mouth feels, smells and tastes just right.  She then vomits it up again (in that typically matter-of-fact way bees have) into a wax chamber full of others bees’ contributions.  The bees then spend a few days fanning their vomit haul until it reaches the right degree of unctuous viscosity, before finally sealing it up in wax for the puke drought that is winter.  Don’t let that put you off though, ‘honey’ (A.K.A you know what) is incredibly nutritious and antibiotic, and even at its’ most ordinary will taste a good deal better than its human counterpart.

And here are some clever ways with bee vomit:

Practically my life blood these days, but I remember thinking ‘bloody hell this stuff tastes terrible’ when I finally ended a long coffee sabbatical. I came to my senses eventually.

What you might not know is that coffee is a member of the gardenia family. They have similar, if somewhat larger, leaves and delightfully fragrant flowers.  The ‘beans’ (actually just seeds) form inside an edible fruit known in the trade as a ‘coffee cherry’.  These fruit taste of neither cherry nor coffee.  In fact, apart from a certain pulpy sweetness, they don’t taste of much at all.

Do decaf, trim, soy and fluffys spell the end of civilization? Click here to find out…

Or try these killer ways with coffee:

We tend to think of olive growing as an awfully rustic boutique pursuit, but in fact olives are the most widely cultivated fruiting plant on Earth, with around 21 million acres in production around the world today.

The initial reason for the tree’s popularity in the Mediterranean basin was that early human activities (like slashing and burning the forests) did such a good job of destroying the local environment that little else would actually grow.  In many areas this remains the case to this day.  Good old humans. We came, we saw, we buggered it all up.

And now  for a little olive inspiration

Despite some of us squirming at the mere thought of it, insects are considered a perfectly normal source of protein many countries, but like it or not, all of us unwittingly eat considerable quantities of them. You see, so numerous is insect life that a good number of them end up – usually pulverised into miniscule fragments – in pretty much all processed food.  There have long been urban legends about cockroach legs in chocolates and spiders in canned soup, but in fact nothing quite so chewable is likely to make it through the production line intact.  It’s what you can’t see that you need to worry about.

So widespread and unavoidable is this phenomenon that that all-powerful and never-guilty-of-spectacular-and-often-fatal-blunders organisation, the American Food and Drug Administration, issue recommended guidelines of insect and rodent hair (!!!!!) content per weight of product to US food manufacturers. Thank God they’re looking out for us.

Speaking of Him, contrary to popular belief, his second favourite agent on earth, John the Baptist did NOT eat locusts (you know, Pharaohs’ least favourite grasshoppers) while doing his ‘alone in the wilderness’ thing. He actually ate locust pods, otherwise known as carob. Unlike their insect namesakes (and yes, I regrettably speak from experience) locust pods are utterly scrumptious.

Sorry folks, the Foodlovers archives are a little light of Insect recipes.

Although these days not capable of growing any further south than about Townsville QL, coconuts (of a sort) used to flourish in the then-tropical environs of northern New Zealand several million years ago.  The fossilised remains of these rather diminutive (about the size of small plum) ‘native coconuts’ are occasionally washed ashore along the east coast north of Auckland.

Bringing things forward a bit, did you know that around 150 coconut-related deaths are reported around the world each year?  Most of these are attributed to nuts falling on people’s heads. Most famously Keith Richards had a rather nasty run-in with a coconut a few years back while holidaying in Fiji. The details are a bit murky but it would seem he fell out of a coconut tree, followed closely by an actual nut. He survived without any apparent brain damage.  But then how would you know?

Despite its status as the traditional Christmas bird, turkey has very short history in European cuisines. Being native to the Americas, Turkeys were unknown in the old world before ‘the conquest’. The wattled horrors were rather begrudgingly -adopted by European settlers to North America as a substitute for the traditional Christmas goose.  The birds also became an important part of the Thanksgiving dinner.

The strangest thing about turkey though is that despite its festive billing, nobody really seems to enjoy eating the bird.  The meat has a tendency to dry out and doesn’t taste of much. The only saving grace is a mildly soporific affect, which at least at my family gatherings is more than welcome.  Yet the largely inexplicable cult of the turkey continues to grow.

A Pig in a Poke

The old saying ‘don’t buy a pig in a poke’ – basically meaning ‘buyer beware’ – stems from the medieval market scam of selling roasting ‘piglets’, ready to carry in a sewn-up sack (known as a ‘poke’ in rather dodgy Old English)  Many a naive shopper would get home to find they had in fact been sold whatever  animal- live or dead- that the unscrupulous merchant had fished out of the local cesspool that day e.g. a cat or puppy, a bundle of rats etc… It was quite the lucky dip.  Alarmingly this was a very widespread problem for hundreds of years, which says little for the street-smarts of our ancestors. 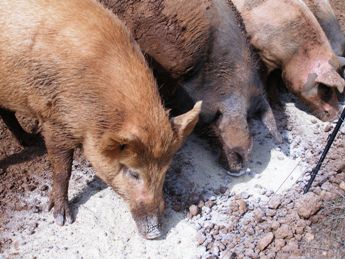 How to Prepare and Roast a Tasty Turkey

2 thoughts on “A pig in a poke: Things you didn’t know about food.”