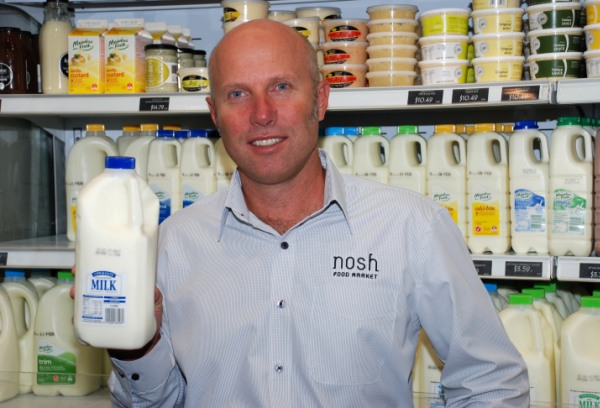 The price of milk plummets today with Nosh Food Market lowering the cost of its Cow & Gate Milk two litre bottle by more than half to $2.

Spiralling milk prices have seen the cost to households rise by 41 per cent since 2007 and it now costs relatively more inNew Zealandthan inSouth Africa, the UK and US.

As a result, Nosh says, people are drinking less milk and in many cases substituting it for cheaper, less healthy options.

“Milk is a basic household commodity and should be available to all New Zealand consumers, not just those who can afford it,” says Nosh DirectorClinton Beuvink.

A parent of school-age children and successful food retailer, Mr Beuvink sees the harm that high prices can do to financially-stressed families.

“People who know I am in food retailing often ask why something we make for the world is so expensive to buy at home? I struggle to answer the question”.

“Milk is good for growing families and it’s a shame it costs more than soft drinks and other less healthy beverages that have little redeeming value and are often chock-full of sugar,” says Mr Beuvink.

“The margins on well-known soft drinks are around 10 per cent and yet retail margins can be three times that for milk.”

Nosh hopes its dramatic move will be a catalyst for permanently driving down the price of milk – with major supermarket chains and other interested parties doing their part in making milk more affordable.

Nosh is reducing the price of the Cow & Gate brand milk to $2 per two litres – a 55 per cent* reduction from the normal retail price at Nosh store.  The price will be fixed in all six Nosh stores (Auckland, Matakana and Hamilton locations) until the end of February.

Mr Beuvink admits it is a token gesture but says someone has to draw attention to the inequities involved and get the ball rolling.

“When retail mark-ups for a healthy product are three times that of a product that frankly does the drinker little or no good at all, then something has to be done. I have no doubt that affordable milk means more people will consume it – which is good for everyone, especially the health of our youngest citizens.”

Nosh prides itself on delivering the highest quality local and international food products to kiwi shoppers.

“We simply do not have the grunt of the big grocery chains in New Zealandbut that doesn’t mean we can’t make a stand on something we believe in. I urge the major chains take up the challenge.”

Australian supermarket giant Coles last year dropped the price of its home-brand milk and spurred the other major chains to lower milk prices – and competition has ensured the lower prices have endured.

Cow & Gate milk (two litre bottles only) will be available at all Nosh locations until 29 February 2012 at the fixed price of $1 a litre ($2 per 2 litre bottle).

NOTE: The February 2011 average price of milk is the highest recorded in ‘nominal’ terms. However, in ‘real’ terms prices have at times been higher in the past. For example, the average price of $3.20 in January 2002 is equivalent to $4.18 in February 2011, after allowing for food price inflation

The Grove wins Metro Auckland Restaurant of the year for the second year running….