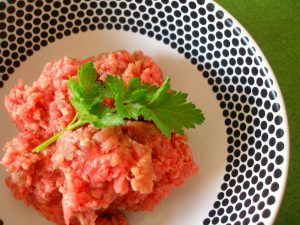 Mince gets a bad rap these days. It’s gained a low-rent reputation, and is subject to so many scurrilous lies and rumours about its origins – nought but snouts and sphincters according to some. But preciousness and pretensions aside, mince is (usually) affordable, highly versatile and curiously comforting stuff.

Although there are probably a few less-than-scrupulous butchers out there, modern mince – be it of beef, pork, lamb or chicken origin) is generally free of offal or floor sweepings. There a number of regulatory reasons for this, but it’s mostly because offal is perfectly saleable individually, and its addition affects the colour, flavour and shelf life of the mince. So in this modern and excessively sterilised age, minced meats is most often just that – finely chopped and ground muscle tissue, fat and maybe the tiniest bit of sinew.

Mince is often criticised for being excessively fatty, and while it’s certainly true that the cheaper the mince the higher the fat content, it doesn’t naturally follow that this any bad thing.Fat carries flavour, and improves texture and mouth feel. Super lean beef mince for example may be kinder on the ventricles than its fattier kin, but it sure makes for some tedious eating.

Good quality mince should be lean, but not anorexic. If you’re really in froth about the lipid count, you can dry –fry it and drain away any excess fat, or allow the dish to cool completely and skim off the solidified, rendered fat.But let’s not be too paranoid. Fat, per se is not dangerous – it only becomes so in the hands of ill-disciplined eaters and irresponsible cooks.

Mince-based meals are almost universally popular with children, who often don’t appreciate the texture and toothsome nature of large cuts of meat. As a small child I certainly felt this way. Many of my favourite dishes were mince-based too, including my most beloved childhood dinner of all- lasagne. I originally pestered my mother to make this on account of it being the food of choice for Garfield the cat, who was something of hero of mine, due to his shameless gluttony, dry wit and violent intolerance of stupidity. I learned such a lot from that cat.

Lasagne can be a bit of chore of a dish to make, requiring two separate sauces: the (usually) beef mince based ragu and cheese béchamel, and then followed by baking. But in my books, it’s always worth the effort, with its crunchy crust and steaming layers of silken pasta, velvet, rich béchamel and full flavoured ragu.

As an adult I’ve come to find the name meatloaf strangely disturbing – a loaf of meat?! But I certainly savoured it as a child, and when well executed meatloaf can be a very decent dish by any reckoning. I’ve encountered some rather desperate attempts to modernise meatloaf with the addition of various Asian and Indian spices, but personally I can take or leave this kind of meddling. Like so many things, the (unlikely) charm of a good meatloaf is in its simplicity.

I recently read an excellent article in Australian Gourmet Traveller which asked several well known Australian chefs to describe their family recipes for spaghetti Bolognese. Every recipe was different- some insisting that only beef mince is canon, while other argued vehemently in defence of pork mince. Some swore by white wine, some red – still others included milk, or chicken livers, bacon or mushrooms. None of these were restaurant-quality dishes, but just the various ways these chefs had learned to make spag bol at home. A purist will tell you that these modern pretenders are nothing at all like ragu ala Bolognese (the original spag-bol ), but does it really matter? I’ve eaten some wonderful homemade spag-bol in New Zealand, and some terrible so-called restaurant quality ragu ala Bolognese in Italy and vice versa. Provenance alone does not make a meal great – ultimately it is only as good as the love and care imbued by its creator. Regardless of your familial flourish, spaghetti Bolognaise remains a firm favourite in the kiwi kitchen and has the rare status of being real family food in that it’s loved by all ages.

I think anyone who enjoys spag-bol would enjoy chilli con carne. It has a similar depth of flavour, but is in many ways a more rounded dish, with the inclusion of beans, cocoa and complex Tex-Mex spicing(it is not a wholly Mexican dish). I resisted this dish for years – finding it all together too wet – but it’s now a firm favourite, particularly in summer when it can be joined with an endless array of zinging, spicy fresh salsas<

Lamb mince is a very affordable way of eating what is otherwise a quite prohibitively expensive meat – something I vehemently object to in New Zealand. Most often I use lamb mince in Middle Eastern and Moroccan themed dishes. Kofta (made with lamb in place of beef) and shwarma are both very popular in my household, and are particularly welcome in winter when the intoxicating aromas and warming flavours of these cuisines are most uplifting. Lamb mince is also very good when dry-fried (until slightly crispy,) with plenty of garlic and a teaspoon each of ground black pepper, allspice and cumin. Serve on a bed of hummus with a salad of cucumbers, ripe tomatoes and mint.Dress with chilli oil and lemon juice and scoop up with hot, toasted pita bread.

I once devoted an entire article to my love of Swedish Meatballs, and time has in no way weakened my love. These tender, flavoursome and delicately fragrant treatsare the very finest use of pork and beef mince that I can think of ,and offer all the understated sophistication we have come to expect from the Swedes.

It may surprise some to know that I’m a big fan of mince on toast and very much appreciate any café with the guts to offer it on their menu. In my opinion the mince in this self explanatory dish needs nothing more than generous seasoning and perhaps a little garlic. I like it dry-fried and very well browned. But not everyone agrees. Typically, Americans took mince on toast and supersized it into the wet and rather worryingly-titled Sloppy Joe. This is a sort of hybrid bolognaise sauce / hamburger/ mince on toast mess. It certainly lives up to its name by slopping and squirting itself all over your hands, clothes, shoes and friends. This is frankly a dish I could live without meeting again, but Americans go wild for it. Take that however you please.

In summertime, during my brief annual fling with the BBQ, I quite enjoy a homemade hamburger or two. For these I use the very best beef mince I can afford, season it generously, mix in an egg and kneed it into a well blended paste. The only additional flavouring I ever add is a little finely chopped fresh thyme. These should be rolled into balls, pressed out to about the thickness of your little finger and grilled or gently fried on both sides. I’m not a fan of onion, garlic, cheese or any of the other additions popular in hamburger patties. For me it’s all about the quality and flavour of the meat. But, just for the sake of being a screaming hypocrite, I will tell you that pure (free-range) pork hamburger patties, made with loads of garlic, fennel seeds, chilli and smoked paprika, are wickedly good, and the robust embellishments actually enhance the sweet piggi-ness of the meat.

Minced fish is a fairly common ingredient in many Asian cuisines, where it is used to make fish balls, patties and sausages.I don’t strongly recommend you buy this as a premade product (due to the varying quality and freshness of its components) but I’m very partial to homemade Thai fish cakes made from freshly minced white fish. These delicate, kaffir lime-spiked morsels are such a breeze to make and are quite addictively more-ish. These can also be made with chicken mince and are then reminiscent – in a good way – of a very grown-up chicken nugget.

Speaking of which, chicken nuggets are one of the very few uses of chicken mince I can bring myself to indorse. Homemade real chicken nuggets seriously tickle my fancy and are a huge hit with kids. Better still, they’re completely free of any of the frightening miscellany that dominates the ingredient lists of their industrial kind.

So if you’ve fallen prey to mince’s bad publicity in recent years, it might just be time for you to let bygones be bygones and give it another chance. There is no end to the uses for mince in the kitchen, and as economies collapse and household budgets tighten, it remains one of the few affordable forms of fresh meat.

What do you do with mince?

10 of the Best Family Mince Recipes

How to Make a Really Good Burger