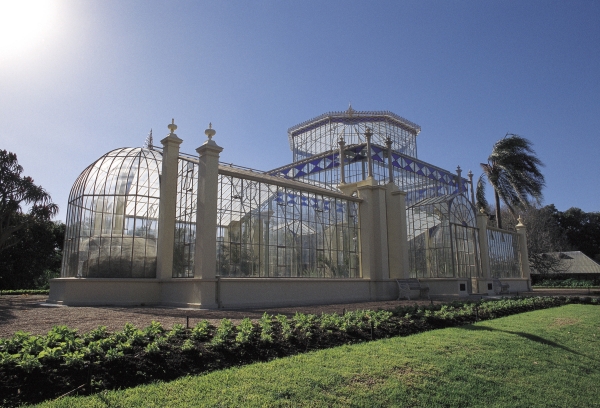 “It’s important to look beneath the surface,” says Brett, our guide from Bookabee Tours, patting the trunk of a tall eucalypt tree. “Red rivergums like this one, for instance, grow only where there is constant water. Where we are standing was once a swamp.”

To the casual visitor, the Australian Forest that nestles in the heart of the 51-hectare Adelaide Botanic Garden resembles an artifact, a pocket of wild Australia surrounded by a carefully manicured expanse of nineteenth-century formal landscaping. Laid out in 1838 and influenced by the designs of the royal Gardens at Kew in England and Versailles in France, the Adelaide Botanic Garden complements the grand architecture of the libraries and parliament buildings in nearby North Terrace. There are parades of palms and Moreton Bay Figs, ponds of Amazon water lilies, gardens of roses and cacti and succulents, summerhouses, pergolas, cafés and a vast tropical glasshouse – the full pomp and panoply of Victorian-era horticulture.

Look beneath the surface though and it’s a different story. Following Brett into the Australian Forest, we walk through a fascinating collection of trees and plants, all either locally indigenous to the Adelaide plains or native to other parts of Australia, which aboriginal people have used for food, medicine or other cultural purposes since the dreamtime. Brett points out edible flower heads, pollens that can be used to make a cordial, seeds that can be ground to make bread. There is a profusion of seasonal native fruits – quandongs, muntries (native apple), Illawarra plums, bush tomatoes, edible roots – some familiar, some not. 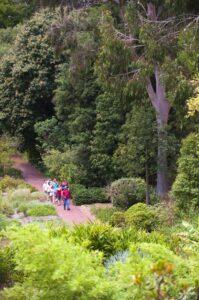 Around 150 of the trees and shrubs in the AustralianForest, Brett says, are sources of traditional medicines. The leaves of some can also be used to wrap food in for cooking while the bark and wood of others yield canoes, shields, bowls, spears and boomerangs.

“It’s truly a supermarket of the bush”, he says later as we enjoy a delicious bush tucker lunch made from some of the ingredients we have seen growing in the wild.

Before the tour ends, Brett also turns the tables on our perceptions of the grand Victorian park. Right at its heart, meticulously restored in 2009 by the Australian Government and the energy companySantos, is the Museum of Economic Botany, one of the last purpose-built colonial museums in the world. In true Victorian spirit, the classical Greek-style 1881 building celebrates the value that cultivated plants have brought, and continue to bring, to our society. Under the high, ornate ceilings of the former mansion, sensitively recreated cabinet displays and installations showcase the grains and cereals that laid the foundations ofSouth Australia’s vast agricultural prosperity, along with a dizzying line-up of other crops including rice, olives, jute, rubber and much more, from the corners of an empire that once encompassed the world.

“The term ‘Economic Botany’ might sound a bit outmoded today,” says Brett, “but that certainly doesn’t apply to the Botanic Garden. When you first look at them, the Australian Forest and the Museum seem as different as any two things can be – but they are actually closely linked. It’s just a matter of looking beneath the surface.”

For holiday information on Adelaide and South Australia visit www.southaustralia.co.nz

One thought on “Food Science, Ancient and Modern.”