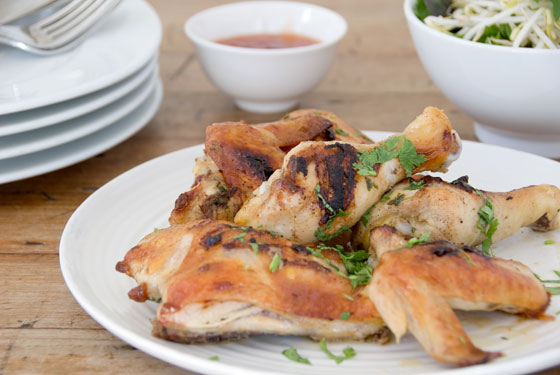 So ubiquitous is the humble chicken among the world’s myriad cuisines that it has become the default point of reference for all other meats. Any unfamiliar flesh is described in terms of how much it tastes like chicken.  I think this is more to do with  lack of imagination and largely mediocre experiences with the bird than any real truth. For example, having eaten a lot of very good chicken in my time, I can assure you quite categorically that neither frog legs nor crocodile taste anything like it. Frog legs taste like gristly pond water, and crocodile tastes much nicer than my conscience would like to admit.

Part of the problem is that until recently, almost all chickens bred for meat were raised in high-density barn situations, fed a diet of rather dubious growth pellets, and were genetically predisposed to swell like feathered watermelons in record time. The resulting meat, irrespective of cut, was usually flabby and flavourless – but it was at least relatively cheap. However much we might tut at the above farming practices (and believe me I do), the vast economy of scale they produce has brought chicken into the hearts, minds and homes of millions upon millions of consumers worldwide.

But, as we know, socially aware avivores now have  choices when it comes to the bird: corn-fed; free range; organic…  or all of the above are available far and wide, and in many cases for only a dollar or two more per kilo than their conventionally raised counterparts.  Aside from the karmic credit afforded by such meats, they often dwell in another league of flavour too. Varied diet, exercise, longer lives before slaughter, and access to sunshine and fresh air all contribute to tastier meat. Chicken that actually tastes like chicken. Imagine.

The trouble is that most of us still think of chicken as a bland backdrop to stronger sauces and marinades, and spare little thought or interest for where and when various portions should be used, other than price on the day. Understandable; one way or another economy dictates most of our day-to-day choices.  But to make a truly informed decision about this, you need to know your bits of bird.

Boneless breast meat is the prime cut of the bird. From the farmer’s point of view chickens are basically breast meat on legs -the bigger the breast, the better the return. This is why meat chickens (broilers) are never kept in battery conditions, which would lead to pecked breast and muscle atrophy; they are packed into reeking dark barns instead (apart from free-range birds, obviously) .

With its very low intramuscular fat levels, breast meat is a relatively healthy cut, and for that reason features in every other prescribed dieters recipes.  The trouble is it can also be  tediously tasteless and dry if mistreated or used inappropriately.

The best use for breast meat is either cold in salads (particularly good with fresh aioli, boiled egg, capers etc), or floured and quickly sautéed. Prepared like this, breast meat can be tender, juicy and wonderfully flavoursome. To make chicken schnitzel, slice breast horizontally and gently beat out until almost wafer thin, crumb and brown in butter.  Chicken breasts can be stuffed and roasted too, but will need their skin or a protective wrapping of streaky bacon (or both if you dare) to prevent the meat from dying out.

Chicken breast can be gently poached in stock, milk or even water, but avoid rapid and prolonged boiling – treated with such violence the meat will initially toughen but then disintegrate into pithy fibres. To get around this slice thinly, toss in flour or corn flour, and brown in oil before adding to soup etc

Chicken with Penne and walnuts

Crispy noodles with Chicken and cashews

These finger-like flaps of meat are off-cuts from the breast. They are rarely sold separately any more but were once pushed as a premium product. If you do happen upon them, they should be treated and used as above.

For reasons that escape me, not everybody likes dark meat. These are the same sorts of people who eat wine biscuits by choice and favour watered-down fruit juice methinks.  No offence.  Anyway, leg meat – especially the bone-in kind – is loaded with flavour, due to its high blood content (thus the ’dark’ part), and all-important intramuscular fat. An oven full of reliably roasting legs is a far better choice than a whole bird for dinner parties and the family roast, although probably not a more economical one. They’re easier to cook, portion and plate, which in my books is worth quite a lot.

Chicken legs stand up to poaching, braising and boiling with gusto. They are by far the best cut for retro classics like Chicken Paprika. They also make a most worthy alternative to a whole bird in Coq au Vin.

Drumsticks are best treated like a meatier chicken nibble, and the tried-and-true sticky-soy-ginger-and-brown-sugar treatment works well with them. Children will enthusiastically squabble over these, and don’t be surprised if the olds end up in the fray too.  I’m rather partial to southern fried drum, as described here in one of my earliest pieces on Foodlovers. Those were the days.

The density of bone-in legs makes them a risky choice for the BBQ, unless they’re pre-cooked in the oven.  You can bone out a leg, sure, but it’s a rather pointless exercise. You’ve paid for that bone, so you might as well use it.

On their own there’s not much to a chicken wing. They’re really more skin and bone than anything else, but as tasty little canapés they’re pretty hard to top. There are no ends to the lovely marinades they can be paired with – especially of the Asian kind – and frankly I’ve yet to meet a chicken wing I didn’t get on with.  I’m not alone in this either; pretty much everyone is a closet wing nibbler. Even your fusty old trout of an in law will quickly give into to their sticky-fingered charm.

Thigh meat has fallen out of favour in recent years, as dietary scaremongering and misguided palates have directed consumers elsewhere. But in terms of texture, flavour and versatility, the thigh is the chicken’s crowning glory (although probably not from the bird’s point of view).

For soups, stir-fries, satays, anything slow-cooked and especially curries, thigh meat is hands-down the finest choice. It holds its texture and deeply comforting chicken flavour long after most other cuts would have given up the ghost altogether.

For the best butter chicken, tom kah gai or even chicken noodle soup, always and only use thigh meat.

Skin-on breast and thigh portions are  now something of an oddity, as supermarket butchers try ever harder to make meat look even less like the animal it came from. Fortunately whole chickens remain in their skins (largely because they look like headless babies without them), and it’s my firm contention that the cook gets to eat their fill of this crispy, greasy salty bliss before it ever leaves the kitchen. If you carve creatively whose gonna to know?

These tiny, elusive nuggets of meat can be found just above the thighs and below the spine on a roast chook. Each bird has only two oysters and they collectively equal about 1 heaped tablespoon of meat. But what meat! If you’re the resident galley slave – and if you’re reading this I assume you are – these gorgeously sweet and almost gelatinously tender morsels are for you and you only. Screw your friends and family (figuratively people, figuratively)!

The most valuable part of the chicken bar none.  A single chicken carcass can yield up to 2 litres of excellent, nourishing, soothing stock, which can be used in literally hundreds (if not thousands) of different recipes: soups, stews, risotto…you get the picture. Never, ever waste a carcass. Promise me.

Recommended reading (well I wrote it):

Rendered chicken fat, or Schmaltz (yes, that’s where the word comes from), is an important item in the Jewish pantry, but as much as I respect the Jewish cuisine(s), I can’t find my way to liking this stuff. Whereas some animal fats are utterly scrumptious – think pork fat, duck fat, dripping etc – chicken fat has a nasty sweetness and a whiff of the hen house about it. I’m willing to concede that one of oldest surviving cultures in the world might know what it’s talking about though… Anything’s possible.

What is your favourite part of the chicken?

How to Prepare and Roast a Tasty Turkey

One thought on “The Exploded Chicken”