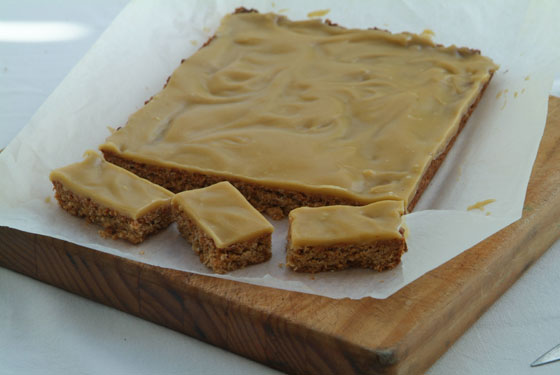 I’m a cook, DEFINITELY not a chef, and barely or at least very reluctantly a baker.  It’s not that I can’t bake,  I can hold my own given a bit of persuasion and arm twisting,  but I’ve always been put off by the rigid chemistry aspects of the art.  Admittedly this is largely due to ignorance and a lingering hatred of high school chemistry.

I may not be the most prolific of bakers but I do take a very active interest in the delectable fruits of a good baker’s labours.  My best beloved is a very good baker, but she works hard all week in the rat race and has little energy or inclination to sift flour and cream butter on her precious days off.  Poor me.  My mother was a patisserie chef for 30 odd years (and no, I don’t mean 30-odd) and is a baker of quite formidable prowess.  She loves to bake for me, but to the point where she will bake herself half to death and the poverty line if ask her to furnish me with cakes.  So I’ve realised lately that if I want baked goods,  it’s really up to me to get over my largely uniformed prejudice against baking- and thus  make morning and afternoon teas bearable (see my recent blog posting on this dilemma )

And what a delightful, prejudice shattering, and magnificently calorific walk down memory road it’s been so far.

Most of the baking I enjoyed as a child – usually via my school lunch box – was of the classic kiwi kind so very well represented by the likes of that seminal centenarian, the Edmonds Cook book  (3.3 million copies are floating around out there somewhere!).  Although Mum was unlikely to refer to the book (she’s one of those terrifying bake-by-feel people), much of what she produced for us was in that vein.  For nostalgic reasons – and because it’s simply very good – this remains my favourite kind of baking and the kind I’ve been rediscovering lately.

So often when you try to revisit your childhood it’s a bit of a letdown.  So many of my favourite childhood films and TV shows have turned out to be bad beyond words  when seen through grown-up eyes ( the Never Ending Story was howlingly awful  and the less said about Knightrider the better), but it would seem that taste buds have a better memory.

Louise cake , which was consistently my favourite childhood cake, is every bit as good as a remember it.  The buttery base, scarlet layer of gritty but grand raspberry jam (a la Barkers of Geraldine- just excellent), and the sweet unctuous, coconut meringue top… It’s a thing of simplicity and grace and I’ve eaten an obscene amount lately.  I am not ashamed.

One of the common themes to many classics of the kiwi kitchen is the inclusion of sweetened condensed milk.  This is a substance that my mother hid from me when I was wee, so great and poorly managed was my love of the stuff.  I still wolf down great spoonfuls today if nobody is looking.  My morbidly obese, tyrannical and very possibly psychotic maternal grandmother schooled me in the art of turning innocuous porridge into a lethal weapon. She advocated the addition of lashings of sweetened condescend milk, butter, brown sugar and cream.  How the woman lasted into her 80’s is a mystery to modern medicine.  This is still my preferred corruption of the dour Scots standard.

(As a little ‘did you know?’ aside, sweetened condensed milk has been around since the 1820’s and was one the most important field rations during the American civil war.)

In baking, sweetened condensed milk brings a rich, silky depth to many cakes and slices.  It naturally thickens sauces and binds ingredients, bringing with it a dangerously moreish edge.

Probably the best known condensed-milk-enriched-slices in the local repertoire are those darlings of the old-fashioned bakery, caramel slice, and its beguiling cousin, chocolate caramel slice. Although tooth-achingly sweet, these two are irrepressibly good and a walk in the park to assemble. And there are no greater partners for strong black coffee.

My all-time favourite cakey thing is a proud member of the condensed milk guild too – Neenish tarts. There is nobody I wouldn’t betray, and few things I wouldn’t do, for the promise of a good Neenish tart.  Not only do they taste of all my favourite things – chocolate, vanilla, lemon and butter- but, to paraphrase Jerry Seinfeld (he was talking about black and white cookies), they advocate racial harmony! What more could you ask for? Bakeries rarely get these rights anymore, so always make your own.

My favourite flavour in anything baked is butter, never mind chocolate or caramel et al.  And despite what certain Europhiles like to bang on about,  we produce very, very good butter in New Zealand (but also inexplicably expensive: click here to read more ,) with a sweet, fragile fragrance and complex depth of flavour, thanks no-doubt to the year-round grazing available to our cows. For rich buttery goodness you can’t beat a decent Madeira cake or an ethereal, perfect Madeleine.

In the biscuit department, shortbread  is the undisputed past and future king of buttery bliss. Homemade are vastly superior to anything store bought that I’ve ever come across, but feel free to prove me wrong.  I’m also very partial to a Melting Moment or ten. Even the dough is delicious enough to eat by the heaped spatula full. Not that I would ever do that, or course.

Ginger has been a popular addition to European cakes and pastries for hundreds of years and it’s certainly widely featured in our local baking back-catalogue. I swear by gingers’ cold-fighting properties (if you need a flimsy excuse to bake,) and use it liberally whenever and wherever I can. It’s a most unusual spice, in that it is equally at home in savoury and sweet recipes.

My two favourite examples of the latter are Ginger Crunch (I judge small town cafes by the quality of their ginger crunch; it’s sadly almost extinct in Auckland,) and the uber-kiwiana Ginger Gem. Yes, you do really need a gem iron, but neither you nor your brunch guests will regret this weighty acquisition.

Now, if you’re a fan of these old time delights but more of an arm-chair baker, fashion has finally caught up with you. Many cafes, at least in the main centres are returning to the Edmonds aesthetic. This unlikely movement is helped in part by the success of books like Alexa  Johnstons’ excellent ‘Ladies, A Plate: Traditional Home Baking’.  My personal favourite place doing the revivalist baking thing is Ponsonbys’ Agnes Curran. If you’re up our way or already a local, drop in for a nice cup of gumboot, a Belgium biscuit (superb) and some cutely mismatched crockery.

But ultimately, as with all things sensual (settle, I mean in the literal sense), baking is an extremely personal thing. Some of you will think me terribly passé, and fair enough too. But I what I most want to hear about is what you bake by choice. Do you, like me, prefer it simple and old fashioned, or chi chi and glam.

What do you bake? 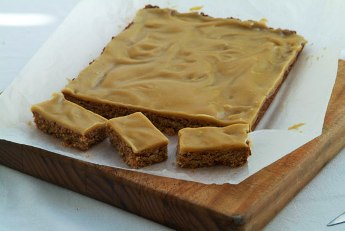 Life is sweet: A guide to the finest sugars.

5 thoughts on “The Reluctant Baker”